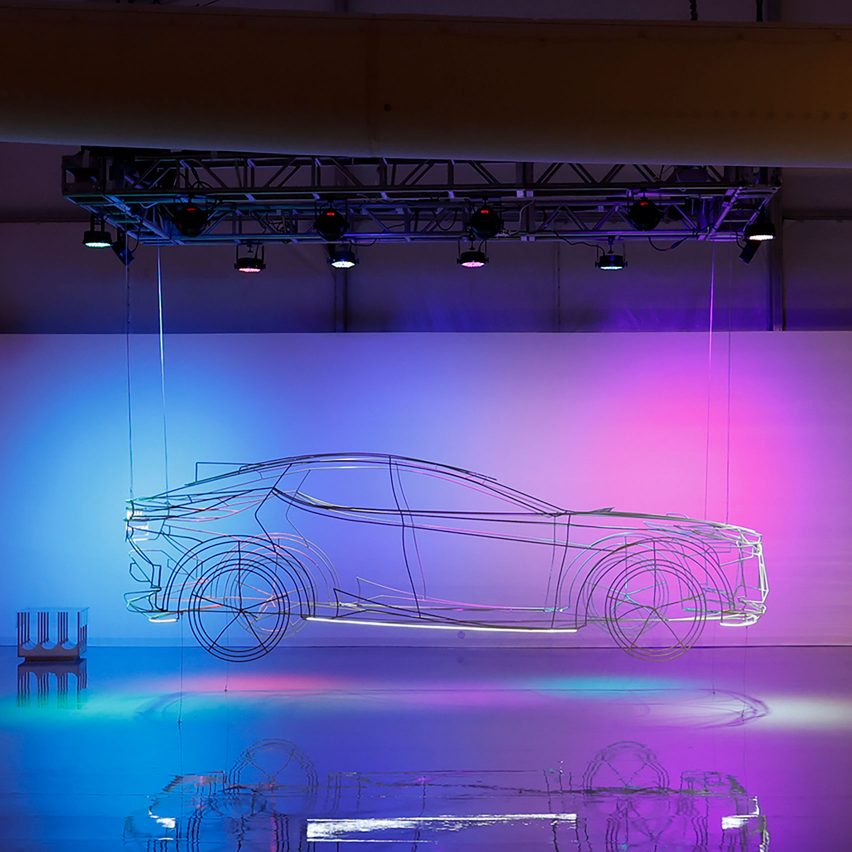 Local architect Germane Barnes has worked with students at the University of Miami to create a wireframe sculpture of a conceptual electric car for Lexus at Design Miami.

Called ON/, the installation is a one-to-one scale sculpture of Lexus’ LF-Z Electrified Concept car made from steel wire.

The sculpture is suspended in the centre of a white stage decorated with bespoke furniture and illuminated by constantly shifting coloured lighting, which people can customise remotely using an online tool.

The installation is intended to represent the ongoing electrification of Lexus’ vehicle lineup as part of its drive to become carbon neutral.

According to Barnes, the idea of doing a wireframe sculpture came from a desire to create a dramatic installation while minimising materials and transport emissions.

“I wanted to achieve an installation that stayed true to Lexus’ mission of a carbon-neutral future,” he told Dezeen.

“So the car is wireframe because the more materials that would have been needed to make, the less that would have enforced that new pivot. Shipping a physical car across the globe to here, again, goes against trying to build a carbon-neutral future.”

Swings suspended underneath white arches stand at each end of the wireframe sculpture, which Barnes said are meant to symbolise that “we’re marching forward into this new future” while also nodding to Miami’s art deco architecture.

Barnes is a Miami-based architect and assistant professor at the University of Miami School of Architecture.

He said he believes it is important that Lexus chose to commission an architect from Miami to work on the project, rather than talent imported from elsewhere in the US or abroad.

“I’ve been coming to Design Miami for eight years now and every time I come, I see work by some amazingly brilliant architects, artists, designers,” he said.

“So I saw David Adjaye, I saw Daniel Arsham, I saw SHoP Architects, I saw Harvard GSD. And I’m just sitting here like, ‘Does Miami not also have talented people that could have been chosen?’ And so I said to Lexus, I was very forthright, I said: ‘Hey, I live here. Our school is located here. Let us do it. We have talented people here too.'”

Barnes also said it was important to him to use the commission as an opportunity to give his students the experience and exposure that comes from working with a global brand for a high-profile event like Design Miami.

Barnes is co-credited for the project with his students at the University of Miami, who worked closely with him on the concept and realisation of the installation.

“We want to look forward to the future and the best way to do that is to empower those who are coming after you,” Barnes said.

“My entire solo career is based on the model of working with my professors, who gave me an opportunity,” he added.

“So when I was given the same opportunity, I felt like I had to pay that forward and say to my students: ‘Hey, would you all like this opportunity to showcase your talents, because this may be something that springboards you into a career.'”

The ON/ installation is currently on show at collectable design fair Design Miami, which takes place in Miami Beach from 1 to 5 December alongside the Art Basel Miami Beach art fair.

Other installations at Design Miami this year include an interactive digital projection created by Austrian design studio Mischer’Traxler for French champagne house Perrier-Jouët.

Photography is by Steve Benisty.

ON/ is on show from 1 to 5 December at Design Miami, which takes place alongside Art Basel Miami Beach and other events as part of Miami art week. See Dezeen Events Guide for an up-to-date list of architecture and design events taking place around the world.