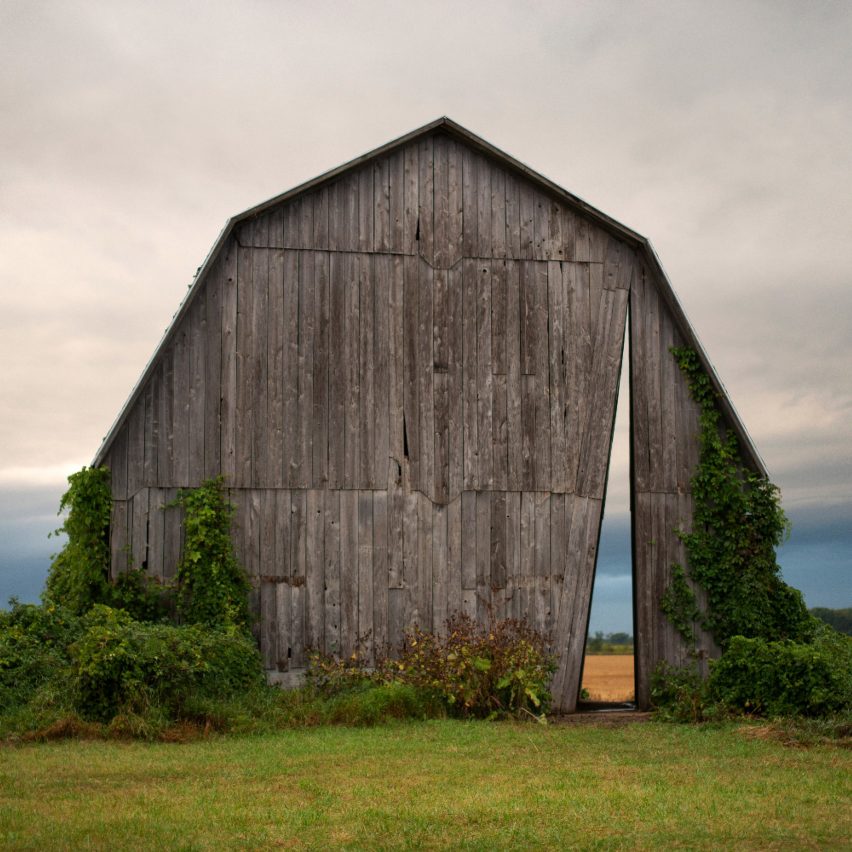 Alibi Studio has revitalised a dilapidated barn in rural Michigan and sliced an opening through its volume to create a passageway from which visitors can admire the sky.

The Secret Sky installation brought life back to the traditional, gambrel-roofed barn that was previously used to house livestock and farm machinery, located amid crop fields in Port Austin village.

In addition to a basic renovation, Alibi Studio introduced an angular cut-out into a corner of the barn – creating the effect of taking a slice from the structure.

Removing a segment of the building added a new space, which forms an open-top passageway that visitors can enter to appreciate views of the sky.

“The void created by the passageway leads to a sharp point at the front of the barn (the east facade), right under some of the structural members for the gambrel roof, and then extrudes in a northwest direction, seemingly cutting through the barn and out on the northern face,” the studio explained.

“Formally they are created as if a very tall and slender triangle was extruded as a void through the barn, cutting the faces and the roof.”

The studio tried to retain as much of the original barn as possible, stabilising the foundational walls and repairing damaged structural elements that had rotted away or been eaten by carpenter ants. 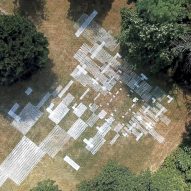 Material from the hay loft was conserved to reinforce or make new structural elements, and all siding that was found on-site was reused.

To create the slice, new sections of timber were added and clad with siding boards rescued from another barn in the area that had blown over in a windstorm.

As studio founder Catie Newell told Dezeen, the Secret Sky installation was inspired by the wide-open spaces of rural Michigan.

“The old barns that sit among the landscape have strong and iconic forms,” said Newell. “They appear both powerful and small in comparison to the wide open sky that surrounds them.”

“I was interested in finding a way to keep the strong presence and familiar form of the barn, but to open up the building to the changes of light and darkness that happen in the sky that surrounds the barn and the fields,” she added.

A series of solar lights are activated at twilight, illuminating the structure from the inside and creating what the studio describes as a “large-scale lantern” in the landscape.

“Alibi Studio is very interested in considering light and darkness as an important occupant of our architecture,” Newell explained. 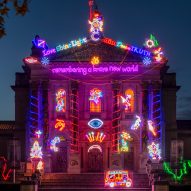 “By creating this space that allowed the light to move through the barn in a different way and also incorporated it as a major contributor to the work,” she continued.

“Anyone who visits the barn is actually taking in and experiencing the colour and light/darkness qualities of the sky at that exact time.”

Secret Sky is the latest in a series of ongoing renovation projects in rural Michigan by a local non-profit organisation, which aims to celebrate the old wooden barns that are typical to, but increasingly rare across, the landscape.

The structure has been shortlisted in the installation design category of Dezeen Awards 2021.

Other shortlisted projects in this category include artist Chila Kumari Singh Burman’s neon-covered design for London Tate Britain, and Asif Khan’s latticed gateways to the Dubai Expo 2020, which are woven from carbon fibre.