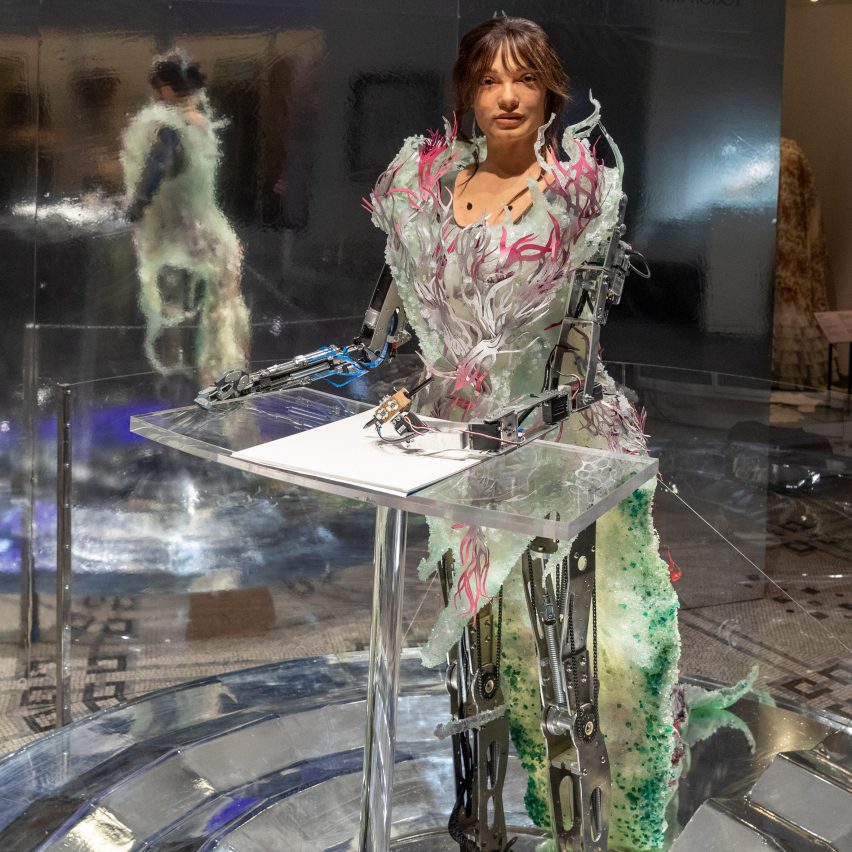 London-based fashion brand Auroboros has designed a dress made from recycled plastic and salt crystals that changes colour and shape in real-time, mimicking the growth of a flower.

The gown, called Biomimicry, was worn by the artificial intelligence (AI) robot Ai-Da at London Design Festival earlier this year at an exhibition inside the Victoria and Albert Musuem, London.

Auroboros designers Paula Sello and Alissa Aulbekova were inspired by the concept of biomimicry, which is defined as “a practice that learns from and mimics the strategies found in nature”.

‘The design of the gown seeks to envisage how a plant would appear if it were to grow on a body, depicting how it would mould to the shape and silhouette of a figure,” the designers told Dezeen.

To create the sleeveless dress, the designers used digital programming. This enabled them to cut the pattern, decide on the size and ensure the correct fit. Once these details were established, they began sculpting the gown’s understructure using recycled Perspex – a solid transparent plastic – sourced in east London.

The crystals that adorn the middle layer of the dress were hand-grown from salt crystals that had been incubated and heated over several weeks. These were then tinted with dark green dyes and embedded on the interior of the gown, giving the dress its watery green colour.

Recycled glass beads from a past project with jewellery brand Swarovski embellish the gown’s train, which trails along the floor.

By repurposing material waste, the designers hope to further the brand’s commitment to sustainability, innovation and inclusivity.

“We hope the couture’s finite life cycle evokes ideas of ecological consciousness for viewers [at the V&A Museum], as we believe that mortality lies at the core of sustainability,” they said.

The final layer, which autonomously transforms in real-time, was developed in partnership with the Queen Mary University of London.

Together, the teams devised a solution using salt crystals that can be added to the mixed media on the gown’s surface which oxidises over time. As the solution is exposed to the air, it turns into uniquely coloured and shaped crystals, giving the dress its “lifelike” quality.

The reactive solution responds to changes in the surrounding environment. This means that “each time, the outcome of the crystallisation process is completely different”.

“The couture’s appearance will differ, depending on the time you view it,” Aulbekova and Sello explained. “Those viewing it at a later stage will see larger crystals than those viewing it at the beginning of the showcase, as the crystals have had more time to develop and grow.”

Eventually, the crystals come to the end of their lifespan and fall off the dress, just like the petals fall off a flower or leaves fall from a tree.

“This ‘mimicking’ of nature’s life-cycle occurs as the gown exists in an entirely ephemeral state; in which the process of growth is fleeting, reminding us to cherish the beauty of the burgeoning life before its eventual end,” Aulbekova and Sello explained.

Alongside biomimicry, Auroboros drew on figures and motifs found in Greek mythology to create the dress. The designers cite the god of sun Apollo and the nymph goddess Daphne as examples.

Their close association with nature can be seen in the dress’ neckline and open back, which is reminiscent of seaweed tendrils.

While the physical dress worn by Ai-Da will self-destruct, digital versions of the same design could be seen virtually using augmented reality both online and at the museum.

Other designers that have used robotic technology in fashion include Ying Gao. The Montreal-based fashion designer released a collection of dresses with fibrous panels that twist and curl when they identify strangers nearby as well as a pair of robotic dresses that expand and contract in response to their environment.

The photography is by Mika Kailes.