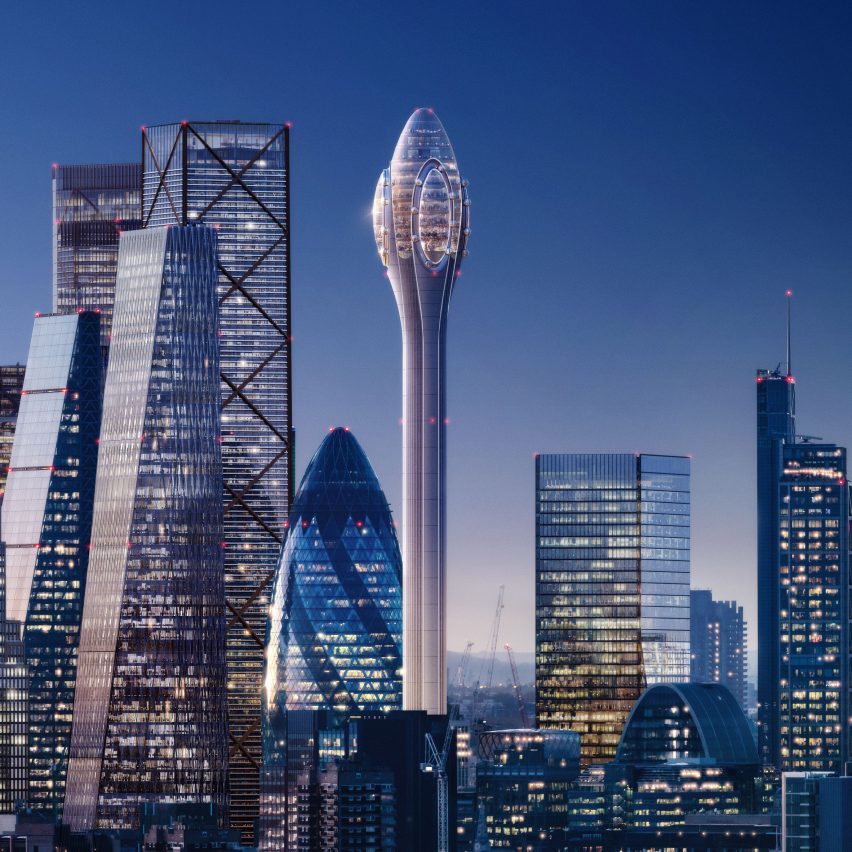 This week on Dezeen, the UK housing secretary dismissed planning proposals for a 305-metre-tall tourist attraction in the City of London over concerns about embodied carbon and the quality of its design.

A letter published on Thursday by the UK government stated that the Tulip tower would cause damage “to the significance of designated heritage assets”. The tower, designed by Foster + Partners, was planned to sit next to the studio’s Stirling Prize-winning Gherkin skyscraper.

Earlier this week, Foster + Partners completed an inpatient hospital on the University of Pennsylvania campus which has a facade of striking copper-hued aluminium and glass bands.

As part of our daily coverage, we also reported on the first built environment day, a climate change artwork projected onto the COP26 venue by Beatie Wolfe and Rolls-Royce receiving a grant for mini nuclear reactors.

In other COP26 news, in an interview with Dezeen BMW head of sustainability strategy Thomas Becker explained why the company won’t be replacing fossil-fuel cars with electric vehicles (EVs) before “poorer countries” have scaled up their EV-charging infrastructure.

We continue to celebrate our 15th anniversary, and this week designers and architects joined us for live conversations as part of the Dezeen 15 digital festival, sharing their visions that could change the world in the next 15 years.

A reflective art depot filled with 151,000-pieces of art opened this week in Rotterdam.

To commemorate the opening of Dutch studio MVRDV’s bowl-shaped building, Swiss artist Pipilotti Rist created a light installation that brings the exterior to life at night.

In design news, American sportswear brand Nike has filed seven trademark applications for virtual trainers and clothes with the US Patent and Trademark Office.

The items could be worn by customers in the digital metaverse and have the potential to be sold as non-fungible tokens (NFTs).

The vehicle can carry heavy cargo over long distances thanks to its hydrogen fuel cells, which have a better energy-to-weight ratio compared to lithium batteries.

Popular projects this week included a lakeside cabin in the Finnish woods, a facility made using waste from its inhabitants called Kamikatsu Zero Waste Center and a village of brightly-coloured houses for LA’s homeless community.

Our lookbook this week focused on Bohemian hotel interiors that reference designs from the 1960s and 1970s and interiors with exposed brickwork.

The post This week Foster + Partners' Tulip tower was rejected by the UK government appeared first on Dezeen.