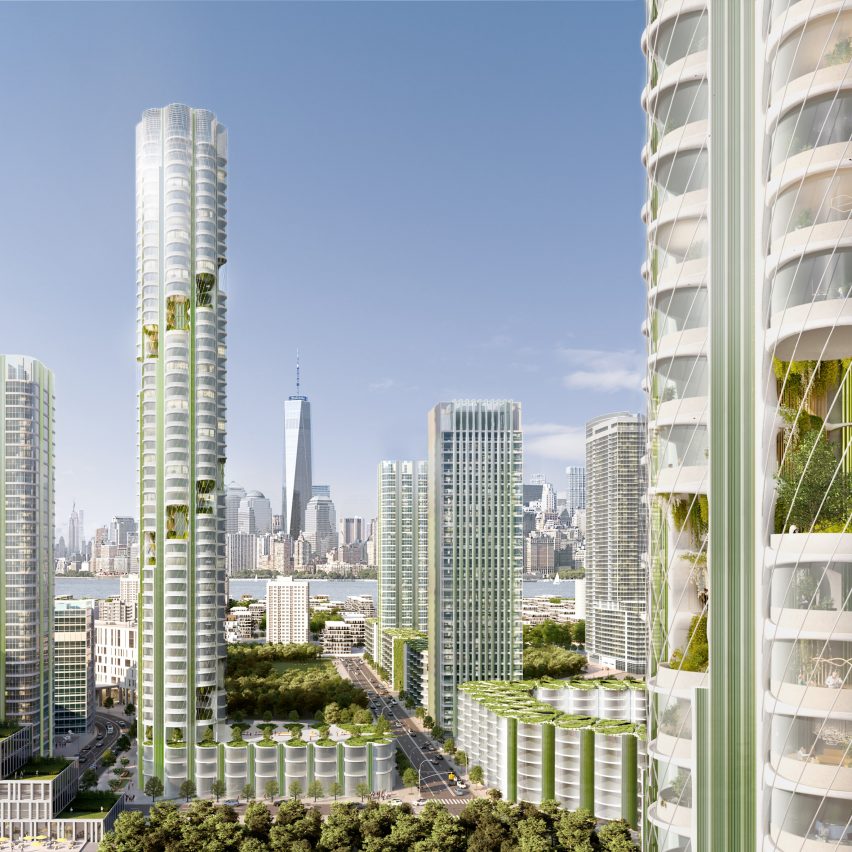 Daily COP26 briefing: today’s COP26 briefing includes SOM‘s proposal for skyscrapers that remove carbon from the atmosphere, a net-zero fund for developing cities and a geodesic Grimshaw pavilion made from construction scraps.

Throughout COP26, we are publishing regular updates of what’s happening at the climate conference and surrounding events. See all our COP26 coverage here.

The prototype high-rise would be built using carbon-storing biomaterials such as hempcrete and timber, as well as direct air capture technologies available today, which according to SOM could sequester up to 400 per cent more carbon over the course of the building’s 60-year lifespan than emitted during its construction.

The captured carbon could be sold on for industrial uses and turned into products, creating a circular “carbon-removal economy”, while algae and biomass grown on the building’s facade could be turned into biofuels for heating as wells as cars and planes.

“The power of this idea is how achievable it is,” said SOM principal Yasemin Kologlu.

“Our proposal brings together new design ideas with nature-based solutions, emerging and current carbon absorption technologies and integrates them in ways not done before in the built environment.”

The UK government has committed £27.5 million to support cities across Africa, Asia and Latin America that are most affected by climate change to transition to net-zero emissions by 2050, in line with the Paris Agreement.

To aim is to cut down on the 40 per cent of global emissions that come from urban buildings while helping to create better living conditions for the millions of city residents worldwide, who will be affected by extreme temperatures and rising sea levels come 2050.

Grimshaw has made use of only grown materials, as well as reused or recycled scraps from local construction sites, to create “a cabinet of climate curiosities” for educational charity Eden Project.

On display in the Scottish Exhibition Centre, the geodesic pavilion mimics the company’s biodomes in Cornwall and houses objects, artworks and models, illustrating how we can regenerate ecosystems and the planet as a whole (via Grimshaw).

Signatories pledge to reach net-zero building emissions in their portfolios by 2030, taking into account both operational and embodied carbon.

Carbon footprint of COP26 more than double that of previous years

As COP26 draws to a close, reporting from The Scotsman revealed that the event has emitted an estimated 102,500 tonnes of carbon dioxide equivalent (CO2e) over the course of its planning and two-week duration.

Drawn from a carbon management plan compiled by the event’s sustainability consultant Arup, this carbon footprint is more than twice as high as the 51,101 tonnes generated when COP25 was held in Madrid in 2019 and almost four times as high as that of 2009’s COP15 in Copenhagen (via The Scotsman).