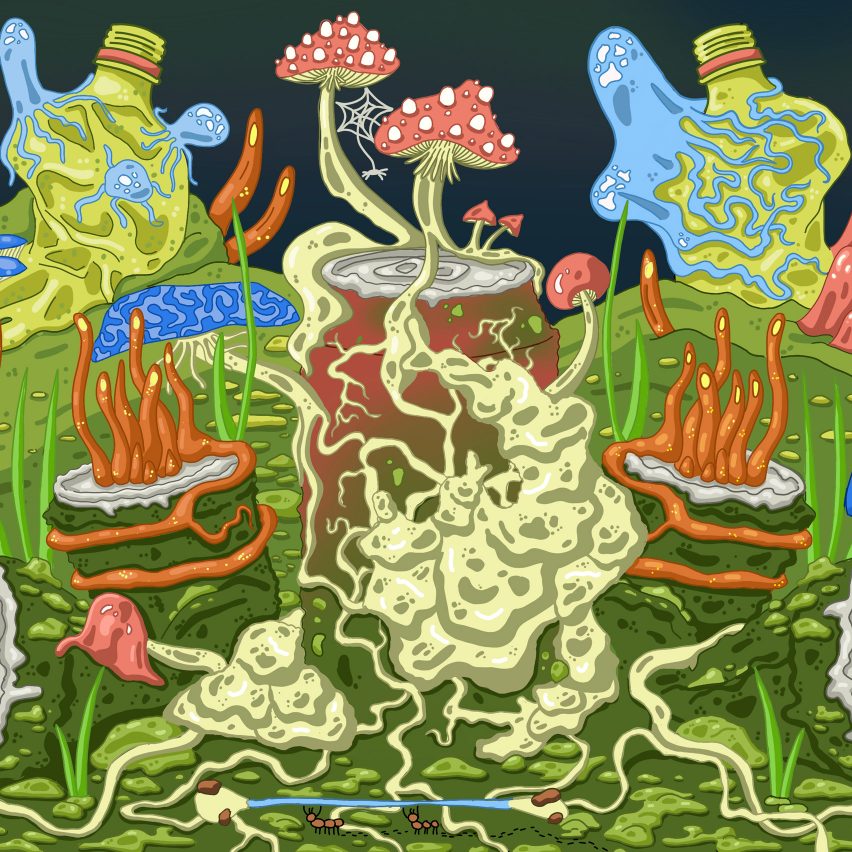 Sustainable design merely passes environmental problems on to the next generation, argues designer Jalila Essaïdi in her Dezeen 15 manifesto. Instead, we should accept that nature will find inventive ways of dealing with our waste.

“Sustainable design strategies might seem to make sense in our current capitalist system,” she writes. “Yet they merely pass the problem on to the next generation,” postponing the inevitable “assimilation of anthropogenic effects, processes, objects, and materials by nature.”

Instead, designers should “equip nature with the diversity of trash it needs to work its magic faster,” she argues. Left to its own devices, nature will turn “poisons into pistons of exotic engines,” writes the Dutch designer in her manifesto.

Dezeen 15 is a digital festival celebrating Dezeen’s 15th birthday. Between 1 and 19 November, 15 different creatives from around the world will propose ideas for making the world a better place over the next 15 years. See the line-up here. 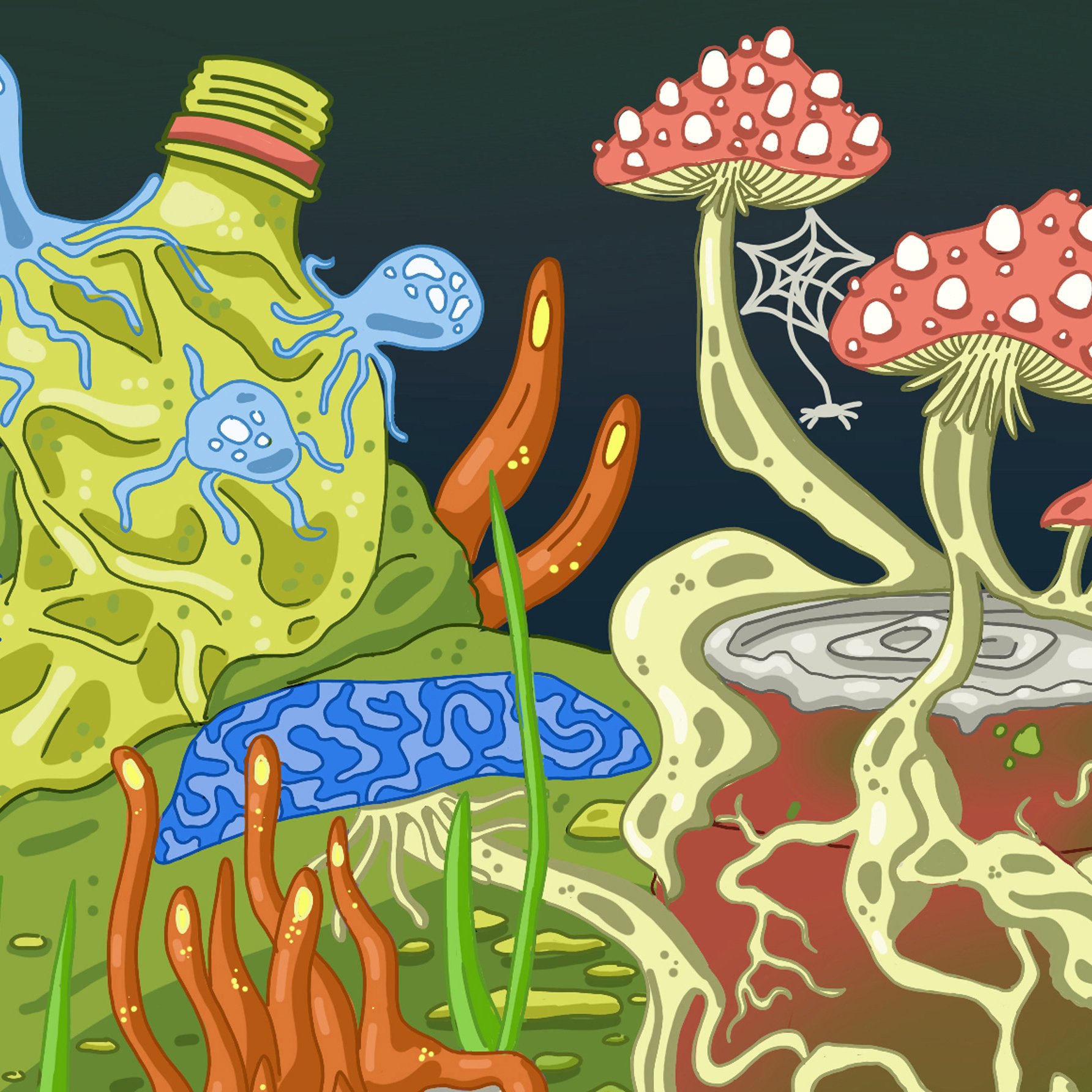 A bizarre disruption of ecological thinking has seized our thought processes: the ecological vision of the apocalypse. It is a vision fuelled by current environmental threats that have dominated recent news headlines.

Beginning in the 60s, eco-communities predicted a new phase for this planet, transitioning people from an era of abundance to one of scarcity. The most radical thinkers among them advocate for depopulation and degrowth, warning us to make voluntary adjustments now in order to avoid making involuntary changes later.

This apocalyptic distortion of ecology treats nature in an unnatural way, like a nurturing mother, a protector of the Garden of Eden; a garden that our consumerism, materialism and waste have destroyed; a garden which she will bring back if only we get rid of man-made waste and pollutants.

Driven by solastalgia, this form of thinking might make sense, but if you look at the bigger picture this idea cannot be further from the truth. Nothing is more indifferent to the sanctity of its environment than nature, especially life. It is the essence of life, as a result of our life-sustaining metabolism, to consume and produce waste.

Over billions of years, countless amounts of bacterial trash-producers and litter-scatterers, with their environmental indifference and reckless irresponsibility, have soiled this once pristine landscape. This soil, this layer of garbage, this trash coat of ever-increasing complexity, is what gives this planet its very name: earth.

Life has littered this place with its tubes, shells and its innumerable pollutants and poisons. Yet, one’s poison might be another’s paradise, like what happened with the deadly by-product of ancient cyanobacteria: oxygen.

Driven by an inventiveness that pales in comparison to anything humans have ever accomplished, it is nature that turns these poisons into pistons of exotic engines that should never have been. Through this inventiveness, the outrageous irresponsible trash of the first generation turns into the treasure on which a second-generation thrives.

In light of all this, you would think that adding self-aware life would act as a catalyst for inventiveness. Yet, it is clear in our design approaches that we are still lacking the understanding of this resource.

Yet they merely pass the problem on to the next generation, accomplishing nothing more than postponing the inevitable: the total assimilation of anthropogenic effects, processes, objects, and materials by nature.

The only way to achieve the above, while humankind is still around, is to tap into the unknown potential of this resource called inventiveness. Much like the “black box” of artificial neural networks, which is ruled by the presence of chaos with high degrees of freedom, we are starting to grasp that inventiveness is not purely driven by logic and reason, but also by a factor that cannot be interpreted.

To incorporate this knowledge into design, we need a totally different mindset and new design approach: we should design for the maximum probability of nature doing something outrageous.

And nature is already misbehaving, producing fungi that decompose radioactive materials and bacteria that can eat plastics. This mindset should not have to offer any direct solutions. However, it should set the stage for an increased probability of nature interacting in novel ways: accelerating nature through design.

Just as how in the biomedical field, material surface topographies are optimized for cell adhesion using evolutionary algorithms, we should design to optimally allow chaos to form potential symbiotic relationships with our trash.

This is design not just with the human end-user in mind but rather design that is mutually dependent on, and beneficial to, the health of all ecosystems. This is design through which consumerism, materialism and waste equip nature with the diversity of trash it needs to work its magic faster and give rise to the new era of the Symbiocene.

Jalila Essaïdi is a Dutch artist and inventor based in Eindhoven. She specialises in designing with bio-based materials such as recycled cow dung, which she used to create a fashion collection that explored how to turn waste into valuable products.

She is CEO of biotech company Inspidere BV and founder of the BioArt Laboratories arts foundation in Eindhoven that provides entrepreneurs access to a biotech laboratory.

The illustration is by Dehlia McCarthy.

The post Designers should "equip nature with the diversity of trash it needs to work its magic faster" says Jalila Essaïdi  appeared first on Dezeen.