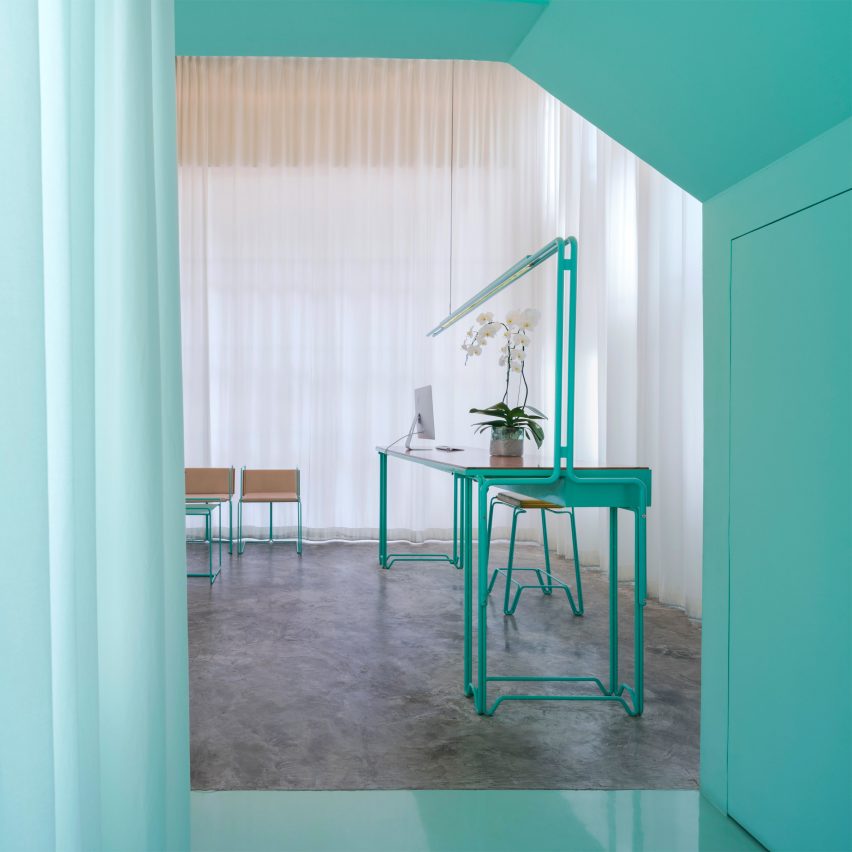 From elaborate stage designs to upholstered sculptures, here are ten projects by architecture and design studio Space Popular that make use of polychromatic textile designs.

In more recent years, the studio has also turned its attention to creating textiles for the infrastructure in both augmented and virtual reality environments.

It is exhibiting 10 of its key projects involving textiles today as part of its guest editorship for Dezeen 15, a digital festival celebrating Dezeen’s 15th birthday. During the studio’s takeover, founders Lara Lesmes and Fredrik Hellberg will also talk to Dezeen’s editor-in-chief Marcus Fairs in a live interview about the increasingly important role of textiles in virtual spaces as they become more intertwined with our physical reality.

This was the focus of a manifesto written by the duo as part of its contribution to the festival, named Threads of Thresholds.

Space Popular is one of 15 creatives presenting a manifesto for a better world at Dezeen 15. Others participating include Winy Maas, Es Devlin and Neri Oxman. Find out more details about all of the participants here.

Read on for 10 projects by Space Popular that make use of textiles. Back-lit cotton curtains break up the pared-back treatment rooms of the Infinity Spa, a day spa built within a small three-storey building in Bangkok, Thailand.

The curtains were designed by Space Popular to create the feeling of infinite space, despite the size of the building, giving the project its name.

Set in the tapestry rooms at the Palazzo Reale Milano in Italy, The Wardian Case was an upholstered sculpture that contained an immersive virtual reality film exploring the historical use of textiles to transport information through time.

The sculpture, which was covered in synthetic suede, specifically referenced the Wardian Case – a container designed to transport rare plants between different continents invented in 1829. 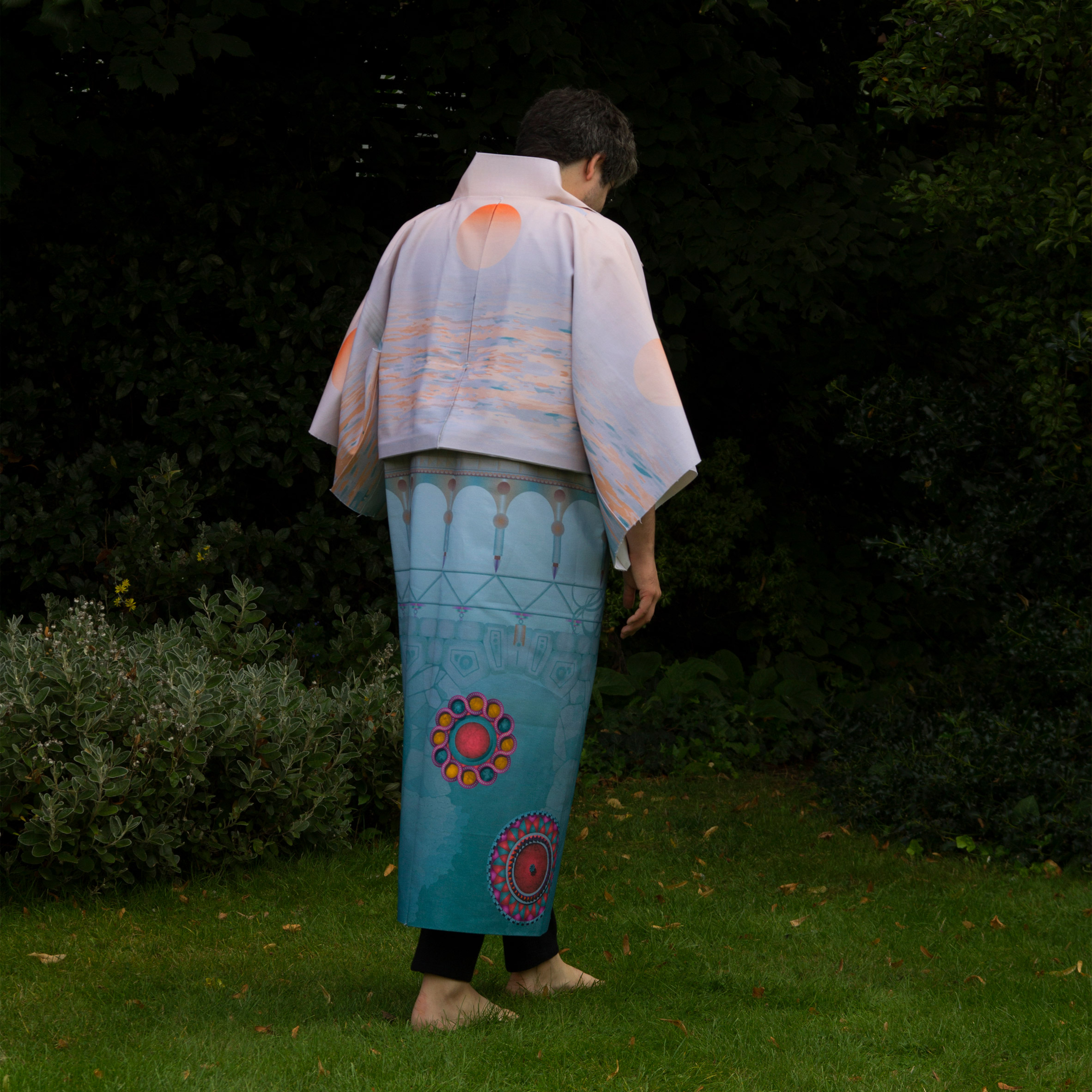 The Stones of Venice is a digitally-printed cotton gown, which Space Popular modelled on Japanese kimonos worn in formal ceremonies.

It is decorated with illustrations, colours and patterns that are all personal to James Taylor Foster, a curator and writer for whom the garment was made. In 2015, Space Popular collaborated with Bang Bang Collective and Issue Fashion on the design of the Soi Stage at WonderFruit Festival in Pattaya, Thailand.

A thin metal structure was used to support a series of fabric frames that were adorned with brightly-coloured motifs resembling columns and roofs. It is a nod to the temporary stages that are often used in China for opera performances.

An alternative future for the use of glass in architecture was the focus of this mixed-reality installation. It was informed by the Glass Chain Letters – a famous correspondence between a small group of German architects in 1919 about what form architecture should take in the future.

The Glass Chain consisted of a kaleidoscopic glass sculpture, a daybed, and a series of decorated cotton drapes.

How I Started Hanging out with Home, 2018

How I Started Hanging out with Home was a textile-based exhibition that visualised a future where buildings take on human features due to the increasing power of domestic appliances.

Installed at the Magazin exhibition space in Vienna, it was composed of a series of wall hangings and upholstered architectural sculptures with humanistic qualities, intended to make visitors feel as though they were intruding on the space. Portland Place Out of Character, 2017

Portland Place Out of Character was a 25-square-metre cotton textile that was hung within the lobby of the Royal Institute of British Architects (RIBA) in London in 2017.

The textile is illustrated with various facade designs that were originally proposed for the home of the RIBA, now named 66 Portland Place, as part of a competition held in 1932.

Two different environments, one physical and one virtual, made up this solo exhibition curated by Space Popular for ArkDes in Stockholm, Sweden.

The project explored the value of architecture in the design of virtual worlds and, in the physical part of the exhibition, featured ten giant carpet prints that depicted various scenes. 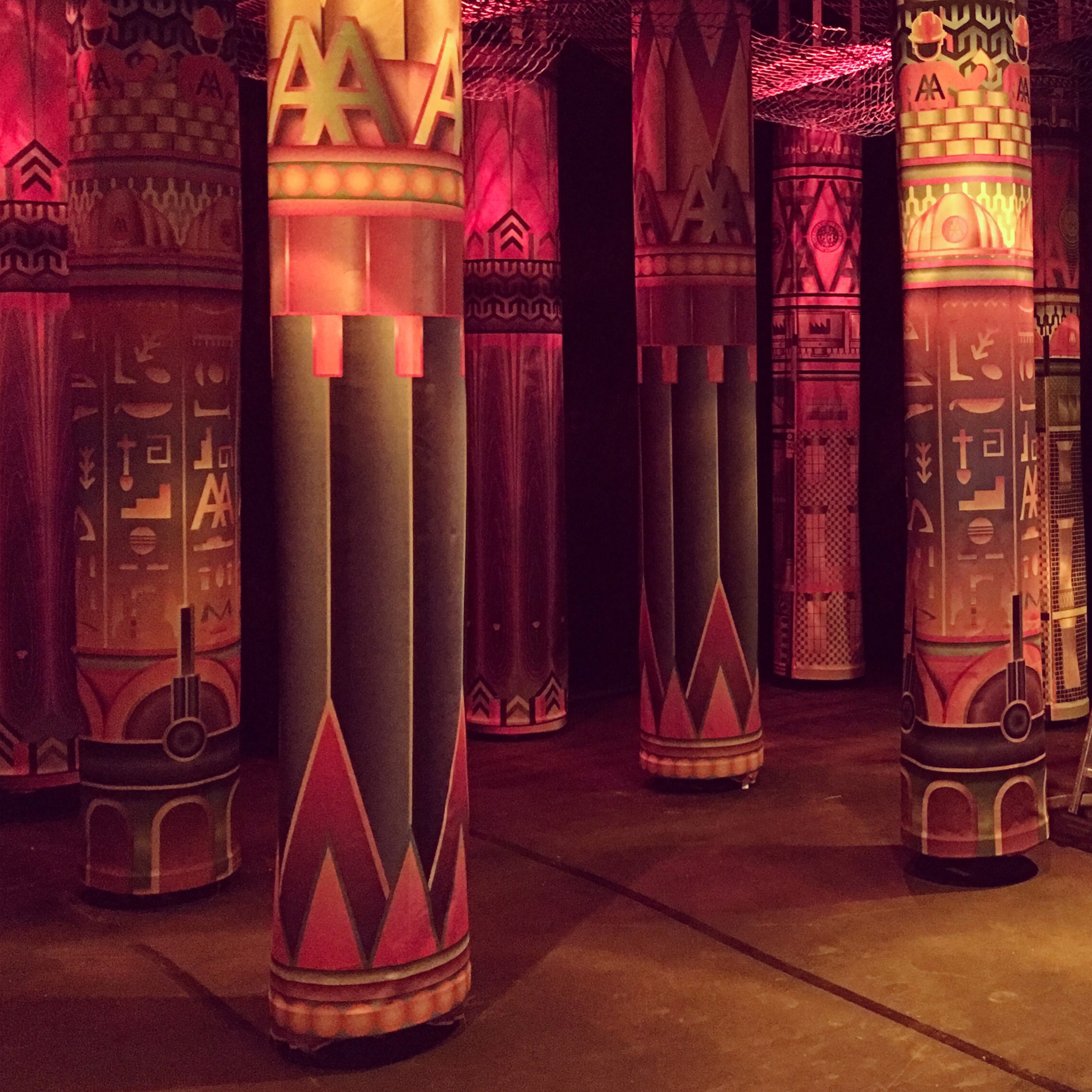 One hundred metres of thick cotton fabric were used to create this installation for a Christmas party in the lecture hall of London’s Architectural Association School of Architecture.

Wrapped around a series of existing columns, the fabric was adorned with elevation drawings of the string of Georgian buildings occupied by the school, but with a playful graphic twist.

Physical and virtual reality merged within The Venn Room, a mixed-reality installation created by Space Popular for the Tallinn Architecture Biennale in Estonia.

As part of the installation, the studio created a series of textile wall hangings that depicted cross-sections of domestic environments within “the augmented future” – an enhanced version of the real world.