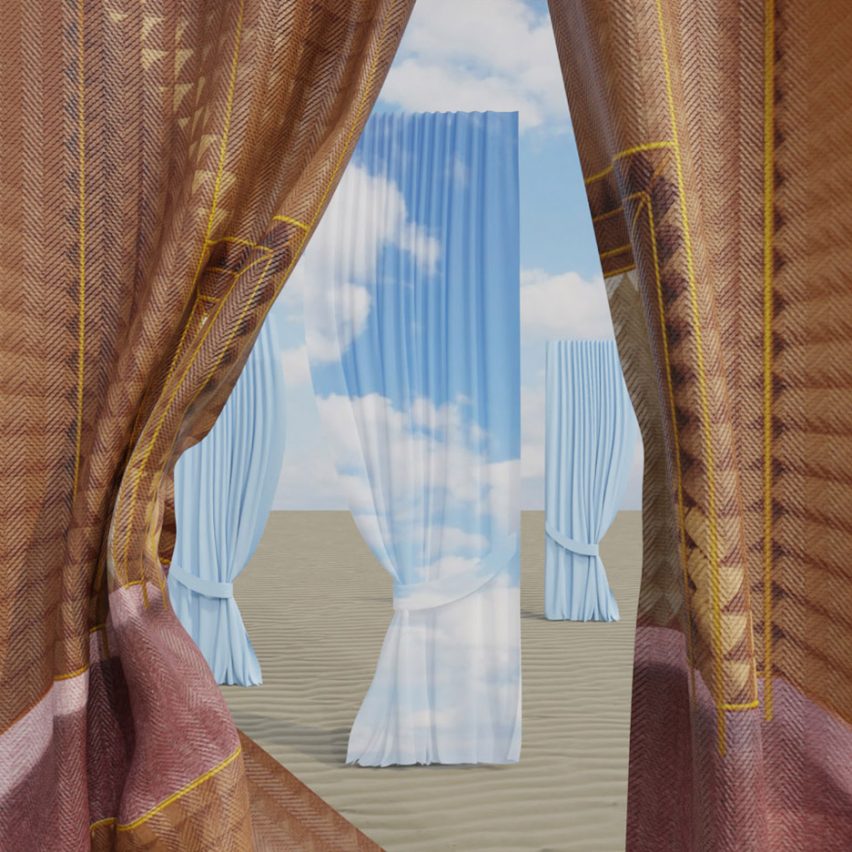 In their manifesto for the Dezeen 15 online festival, architects Lara Lesmes and Fredrik Hellberg of Space Popular propose portals made of virtual textiles to transform the experience of passing between digital worlds.

“Rather than swap pages when we switch tabs or click a link, we replace the entire environment around us,” they write in their manifesto.

“In the coming 15 years, we must create a civic infrastructure for virtual teleportation that breaks with the discriminatory and opaque nature of locked doors, hidden vigilance, privacy breaches and concealed discrimination.”

They propose “a threaded network of virtual textiles that our virtual selves pull aside to move between virtual environments.

“Such textiles only become apparent once we aim to touch them, pulling apart in mid-air the environment we are in and allowing us to access another.”

Alongside their manifesto, Dezeen has published a range of Space Popular’s projects that make use of textiles as well as a teaser of their upcoming exhibition at Sir John Soane’s Museum.

The Dezeen 15 festival features 15 manifestos presenting ideas that could change the world over the next 15 years. Each contributor will also take part in a live video interview.

See the line-up of contributors here and watch the video interview with Space Popular live on Dezeen later today. 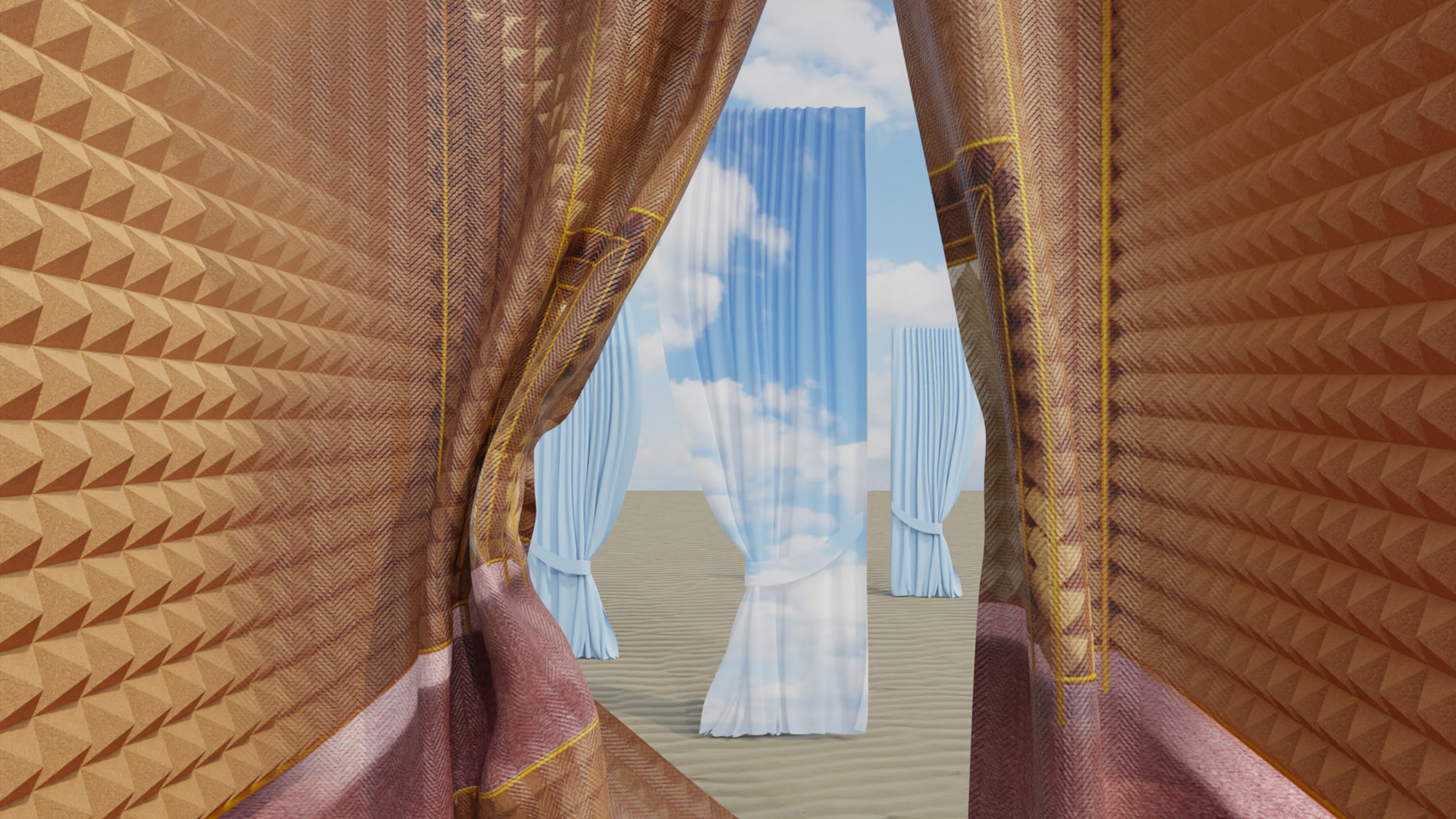 As digital media gains a third dimension through immersive technology, our cultural, political and experiential understanding of how we access and navigate spaces is challenged. The coming 15 years will see the weaving of physical and virtual environments become denser as our scrolls turn into strolls, and our cursor grows into our full-body avatar.

Rather than swap pages when we switch tabs or click a link, we replace the entire environment around us. The speed and manner in which these shifts happen, as well as the gesture that triggers them, are at once the affordance and infrastructure for accessing and navigating the virtual environment. In the coming 15 years, we must create a civic infrastructure for virtual teleportation that breaks with the discriminatory and opaque nature of locked doors, hidden vigilance, privacy breaches and concealed discrimination.

Commonly referred to as portals, one of the most popular means to switch from one environment to another is door-like or hole-like thresholds that grant us entrance into another virtual environment of any kind and size. Such travelling devices have existed for centuries in oral history, literature, film, gaming, and naturally now in immersive media. The portal provides a familiar means to link environments that would otherwise be completely incomprehensible to us.

The contrast that comes from opening a door from the living room into outer space is thrilling but yet coherent thanks to the familiarity of opening a door and crossing its threshold. When we cross a portal we build imaginary walls around the environments we are shifting between, no matter how vast they were, constructing a notion of the overall map that resembles a matrix of interconnected rooms (using here Robin Evans’ term from his essay Figures, Doors and Passages). This recognisable notion makes the experience readable, relatable, and therefore meaningful.

Virtual environments are, however, currently existing within centralised platforms that create isolated islands – or, shall we say, fortresses. Some platforms have better solutions than others in providing the means to teleport between environments contained within. Now, moving from one platform to another is a whole other journey that often takes us through some kind of app store where we are meant to scroll through browser-like interfaces in virtual displays floating around us. Once we press on one, after possibly a few prompts and some darkness, we are in the new place.

This brings up the main issues we are concerned with. Firstly, the fact that most immersive environments are currently contained within several layers of commercially driven platforms (it must be mentioned that there are promising open source initiatives such as Hubs by Mozilla); and secondly, the instability and unreliability conveyed by the means of access (you may not be granted access and never know why, or the environment might switch off as a result of something completely out of your control).

The means of teleportation across the virtual environment must eventually become a coherent protocol: a three-dimensional version of the hyperlink in the form of a portal that at once grants access to an environment as well as the necessary information about it. Such infrastructure must exist outside private or commercial entities and be of civic character: a public and open protocol that weaves together environments into a virtual urban fabric, the fabric of civic teleportation.

We propose a threaded network of virtual textiles that our virtual selves pull aside to move between virtual environments. Such textiles only become apparent once we aim to touch them, pulling apart in mid-air the environment we are in and allowing us to access another. Thus, they are parallax tapestries that, on closer inspection, reveal through the quality of their threads the conditions of the space behind them which we agree to once we cross the threshold.

Here are eight propositions for a threaded portal infrastructure for the virtual environment. The Fabric of Civic Teleportation should be:

The way we move through the virtual environment must provide reliable and dependable spaces of access that do not change with every update. Communities require a degree of stability and certainty to build upon.

The portals to and across virtual environments must contain information about the space behind them which are widely legible. This will require the creation of a new grammar of material behaviours, graphics, and signs to be incorporated across all access points.

The portals to virtual environments must be interconnected and consistent throughout, appearing the same to all citizens of the virtual environment at any given time. We must perceive the same if we are to understand a space as shared and a group of people as a community.

Currently, browsers are the unquestionable access point, the place where it all begins, for all of our virtual strolls. The fact that most browsers are owned and operated by for-profit companies means that from that first step we already enter a commercial realm. The means of navigation must operate as civic infrastructure for the benefit of its citizens.

The calculations involved in bringing us from one virtual place to another, and allowing us to stroll through options, must be computationally efficient and consume as little energy as possible. The environmental impact of virtual spaces should also be part of the information communicated to the citizens of the virtual environment at the point of entry.

The hyperlink is integral to the World Wide Web as we know it, experienced so far mostly in its flat version, through screens. The underlined blue text or the button-like graphic take on a third dimension and become portals as we enter the virtual environment. In doing so, such portals must be based on protocols that are able to exchange and make use of information across spaces.

The portals across virtual environments must be able to express how they are woven together, showing threads to other places and revealing the knitted network they are a part of. The expression of such portals must also be familiar and cognitively coherent with our only three-dimensional frame of reference: the built environment.

Fabric provides a versatile affordance (fabric can take many shapes and sizes without appearing distorted, exaggerated, or unrealistic); an inviting metaphor (a curtain demarcates space while not locking it, thus – as opposed to a door – it provides a welcoming threshold to cross); and a canvas for information (the knitting and embroidery of a tapestry provide many layers in which both figurative and abstracted information can be read prior to accessing the environment behind it).

Space Popular is a multidisciplinary design and research studio founded by architects Lara Lesmes and Fredrik Hellberg. The duo has pioneered the development of virtual architecture, designing the world’s first virtual-reality architecture conference.

Find out more about Space Popular ›