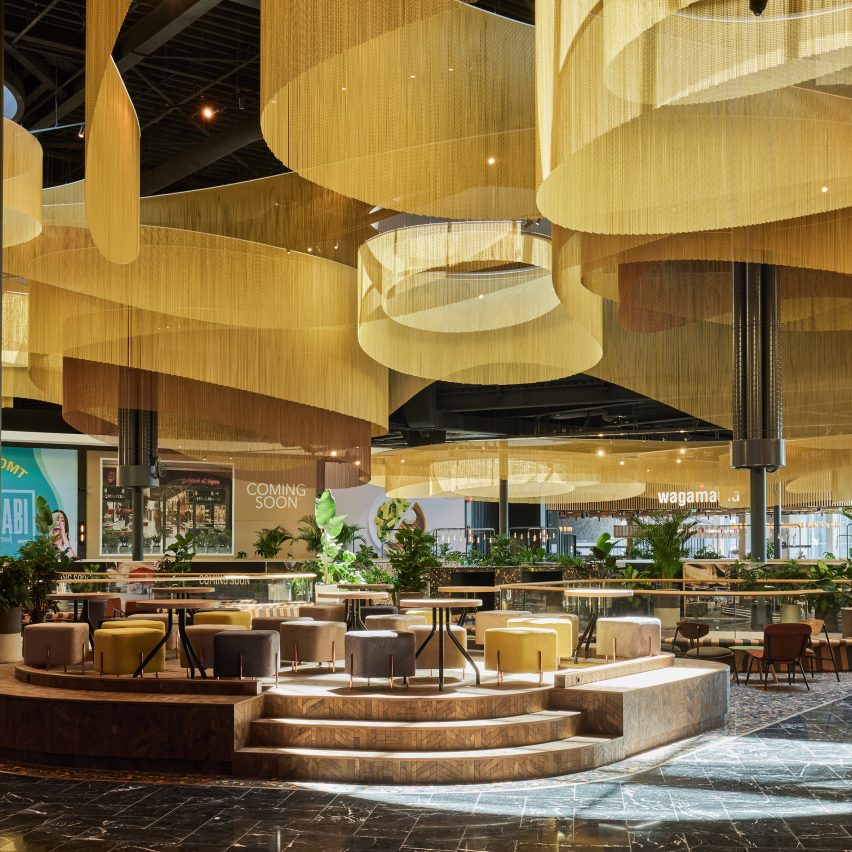 Spanish brand Kriskadecor produces chain-link curtains that are extremely versatile and lightweight and can be used to transform the look of interior spaces.

Dutch studio MVSA Architects used the chains to create a sculptural ceiling installation in Westfield Mall of the Netherlands, while Japanese architect Kengo Kuma designed a new stairwell for a famous house in Barcelona by Catalan architect Antoni Gaudí.

Westfield Mall of the Netherlands is the brand’s largest installation to date. MVSA used 235 kilometres of Kriskadecor chain to create huge curved panels in shades of brown and gold.

There are 30 panels in total, which helped to create a more intimate atmosphere in the dining hall of the 117,000-square-metre building.

“We were able to create a space where you could sit down, relax and feel comfortable and happy, because the curtains create that kind of atmosphere,” said Thijs van de Straat of MVSA.

Kuma’s project is equally ambitious in scale. The architect used 164 kilometres of chains to envelop a new staircase linking the ground floor of Casa Batlló with its newly renovated basement.

The curtains are neatly layered to create a pattern that mimics the form of tiles on the villa’s roof. The chains extend across the walls and ceiling, creating a three-dimensional effect.

“In terms of size, we create projects of all dimensions, from the smallest to the most spectacular,” said Kriskadecor.

“The lightness of the material and a clear spirit of innovation has allowed us to create metal structures of enormous proportions.”

Kriskadecor can manufacture chains in endless combinations of size, shape, and colour. Designs can also integrate imagery or text.

The brand controls the production process from start to finish, to ensure a high-quality result.

Other examples of Kriskadecor’s large-scale installations include the Ecuador Pavilion at the Milan Expo in 2015, where chains created bold patterns on the facade.

The company also worked on the car park of the Odiseo Leisure Centre in Murcia, Spain, using bright red curtains to create a distinctive graphic feel.

For more information about Kriskadecor’s projects, visit the brand’s website

This article was written by Dezeen for Kriskadecor as part of a partnership. Find out more about Dezeen partnership content here.

The post Kriskadecor chain curtains installed on a grand scale in new projects by Kengo Kuma and MVSA appeared first on Dezeen.