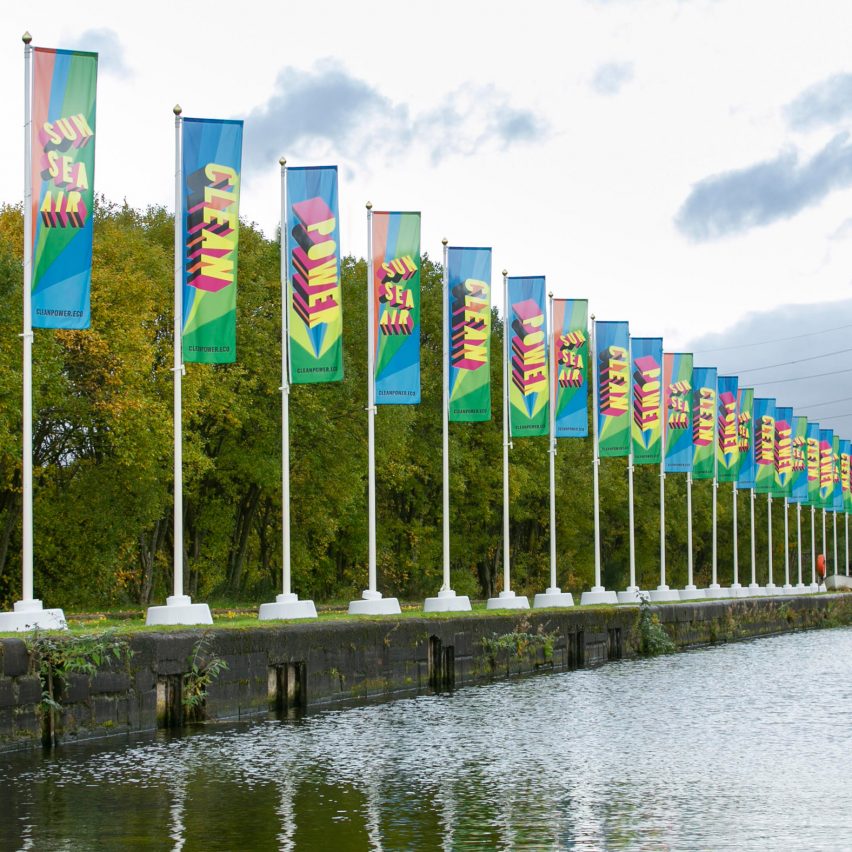 Throughout COP26, we will be publishing regular updates of what’s happening at the conference and surrounding events. See all our COP26 coverage here.

The Passive House Institute is arranging a series of tours of Passive House buildings in Glasgow on 8 November. Named Sustainable Buildings of Glasgow, the tour will include visits to Passive House social housing units, three retrofitted high-rise towers and a refurbishment of traditional Victorian tenement flats.

London studio Make has unveiled a virtual reality installation that forms the central space at the UK Green Building Council’s (UKGBC) Build Better Now pavilion. Called Fountain of Circular Recovery, the installation sits at the centre of the pavilion where 17 “exemplary sustainable projects” are being exhibited by the organisation.

Artist Morag Myerscough has unveiled a series of flags and banners as part of an installation named Clean Power. According to non-profit organisation #TogetherBand, nearly three-quarters of greenhouse gas emissions come from the energy we use to power our lives.

To draw attention to the issue, Myerscough placed 40 giant flags made from recycled plastic across the host city Glasgow that have the words Clean Power and Sun, Sea, Air, written on them.

“With this work I wanted to put out an optimistic approach towards our future, if we work together we can help make the changes we need to happen,” said Myerscough. “The oranges, greens and blues represent the sun, sea and air that we need to power ourselves to a renewable future.”

The American Society of Landscape Architects (ASLA) has issued a statement calling upon governments attending the conference to commit to “more ambitious” targets.

The Construction Scotland Innovation Centre is hosting the Wood for Good conference, which will explore the role of timber in the journey to zero carbon, today. Waugh Thistleton Architects co-founder Andrew Waugh will be speaking at 10:30am.

Climate activist group Architects Climate Action Network (ACAN) kicks off its program of events during COP26 today with a launch party for the Architectures of Crisis: Hopes + Visions exhibition at the New Glasgow Society East.

Anthropocene: The Human Epoch to be screened today

To coincide with the conference, the High Commission of Canada in the UK is presenting an IMAX screening of the Anthropocene: The Human Epoch documentary at the Cinema Auditorium today. It can also be watched online here.