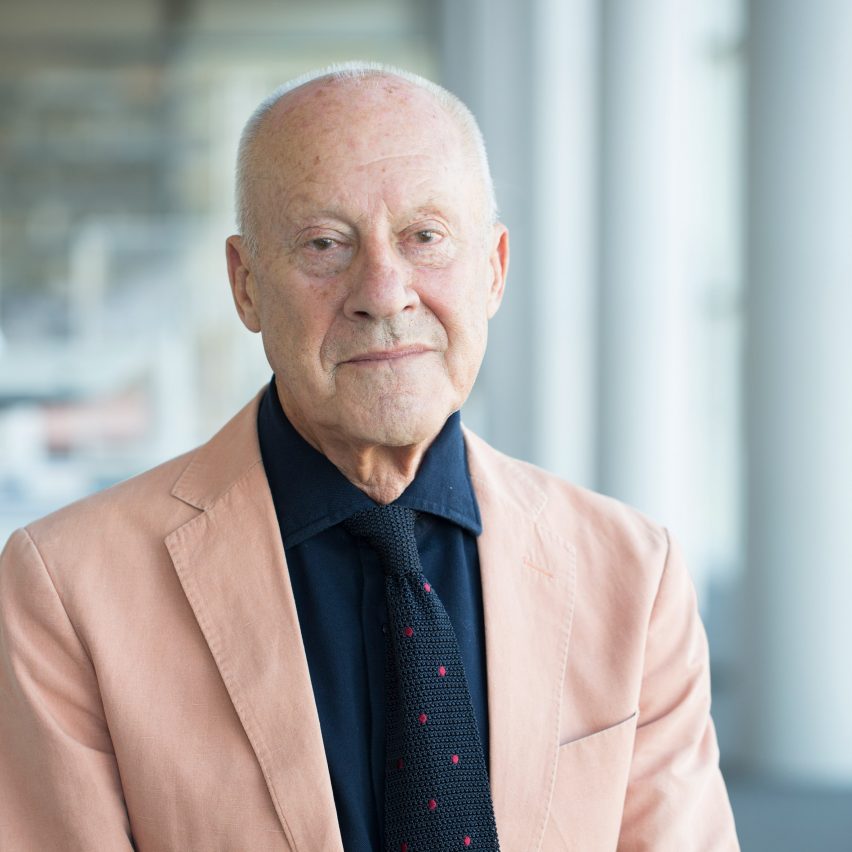 Daily COP26 briefing: the first of our daily COP26 briefings includes details of a conversation between Norman Foster and John Kerry at the climate conference, a Morag Myerscough installation and a house built from Scottish timber.

We’ll be publishing regular updates of what’s happening at COP26, which RIBA president Simon Allford described as “a critical juncture for humanity,” for the duration of the conference.

See all our COP26 coverage here.

Architecture studio Foster + Partners is hosting a series of climate-focused events during COP26, including a talk between Norman Foster and US climate envoy John Kerry on 3 November plus a talk titled Halving Emissions by 2030 on 4 November (via Foster + Partners).

House made of Scottish timber opens at COP26

The one-bedroom house, which can be erected by two people, is based on a 1.2-metre grid so it can easily be prefabricated.

The installation aims to raise awareness of the amount of timber imported by the UK, which has significantly lower tree cover than most European countries.

“The UK is one of the largest importers of wood products in the world,” said Beyond Zero Homes. “As a nation, we spent £7.5 billion in 2020 importing wood products from other countries.”

Artist Morag Myerscough has collaborated with non-profit organisation #TogetherBand to place 40 giant flags made from recycled plastic on show throughout the city of Glasgow.

The words Sun, Sea, Air and Clean Power are written on the flags, which will be installed in cities across the UK after COP26, before being erected on Regent Street in London to mark Earth Hour in March (via The Art Newspaper).

Climate activist group Architects Climate Action Network (ACAN) is hosting a series of events in Glasgow during the conference. Exhibitions will be taking place at New Glasgow Society East throughout the event, while the events kick off with a launch party tomorrow and a talk on deconstructing carbon on 4 November (via ACAN).

As part of the Dezeen 15 celebration of our 15th Birthday, set designer Es Devlin will talk about her manifesto for the future directly from the climate conference in Glasgow (via Dezeen).

Social enterprise and business incubator Cockpit has published an investigative report that looks at the actions being taken by makers in response to the climate emergency.

“With its slowed-down processes and local supply chains, craft offers an alternative to an economy fixated on notions of growth through cheap mass production and cheap mass consumption,” said Cockpit CEO Annie Warburton. “To make craft is to make well. And to buy craft is to buy well, buy once, buy to last” (via Cockpit).

The Wood for Good conference takes place at the Construction Scotland Innovation Centre tomorrow. It will explore the role of timber in the journey to zero carbon, with speakers including Waugh Thistleton Architects co-founder Andrew Waugh (via Wood for Good).

The results will be featured in daily events at the Strath Union at the University of Strathclyde.

“We’ve created a space for everyone to participate in COP26, beyond just world leaders,” said Helena Good, Daydream Believers’ design lecturer. “Our virtual campaign and live events at the University of Strathclyde give us all a chance to take part in the climate conversation and drive positive change – together for our planet” (via PR Web).

COP26 will take place at SEC Centre in Glasgow from 1 to 12 November 2021. See Dezeen Events Guide for all the latest information you need to know to attend the event, as well as a list of other architecture and design events taking place around the world.