London’s latest urban design trend involves commissioning a designer to paint a colourful pattern on a wall, road or bridge. Here are eight examples of polychromatic paint jobs from designers including Yinka Ilori and Camille Walala.

The trend offers an easy, low-cost way to brighten up a neighbourhood. Other London designers who are getting out their paintbrushes are Adam Nathaniel Furman and Morag Myerscough.

In an interview with Dezeen last year, Furman identified this group of designers as part of a new movement that he christened New London Fabulous.

Since then, further projects have followed including Ilori’s rainbow road crossings for this year’s London Design Festival and Furman’s vibrant stripes on a Kings Cross bridge. 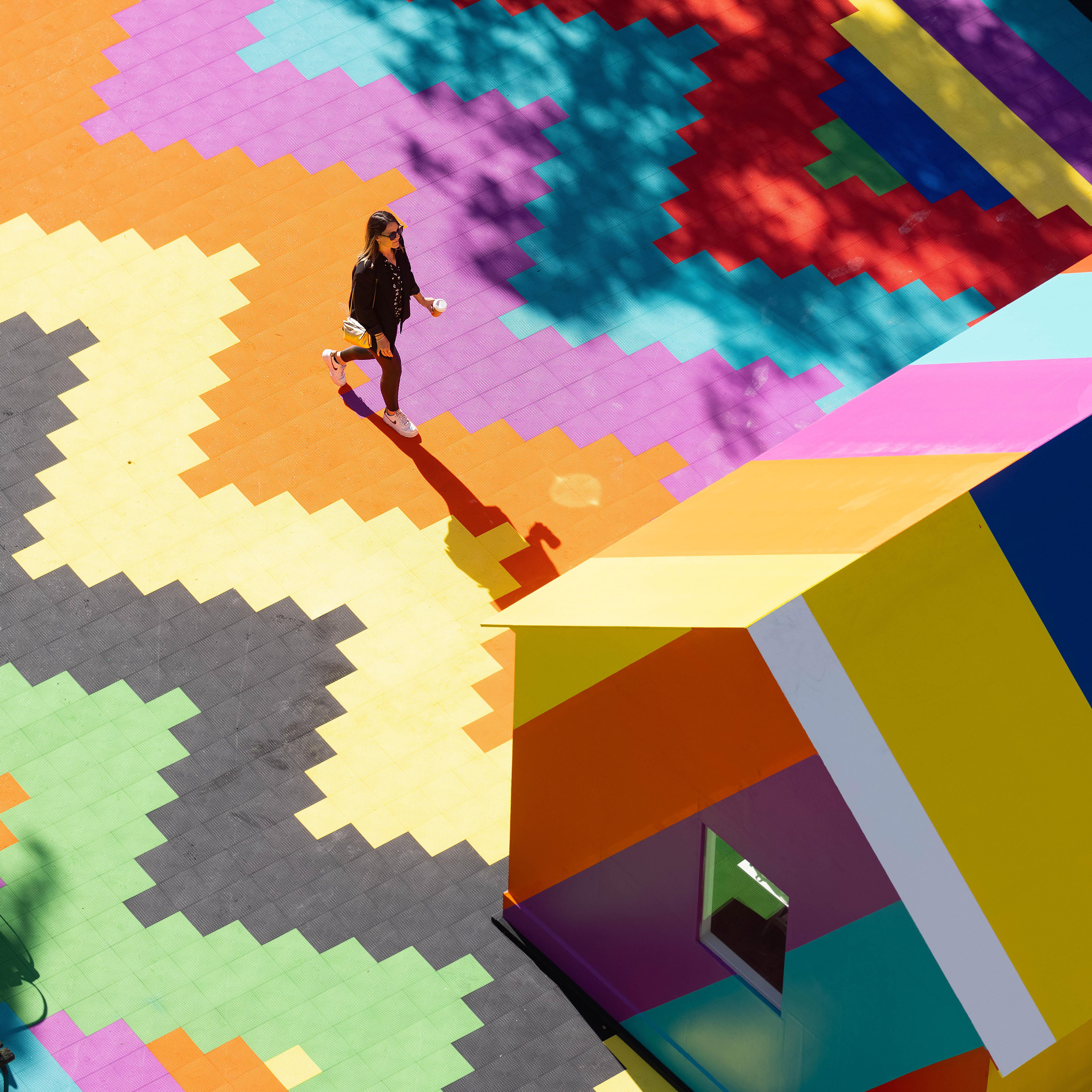 Back in the Air: A Meditation on Higher Ground, London, by Lakwena Maciver

London-based artist Lakwena Maciver was commissioned by Westminster Council to turn a rarely-used rooftop above Temple Underground station in central London into a “paradise”.

Called Back in the Air: A Meditation on Higher Ground, the tiled artwork stretches over the 1,400-square-metre roof terrace, providing Londoners with a secret place to observe the river Thames from up high.

Find out more about Back in the Air: A Meditation on Higher Ground › 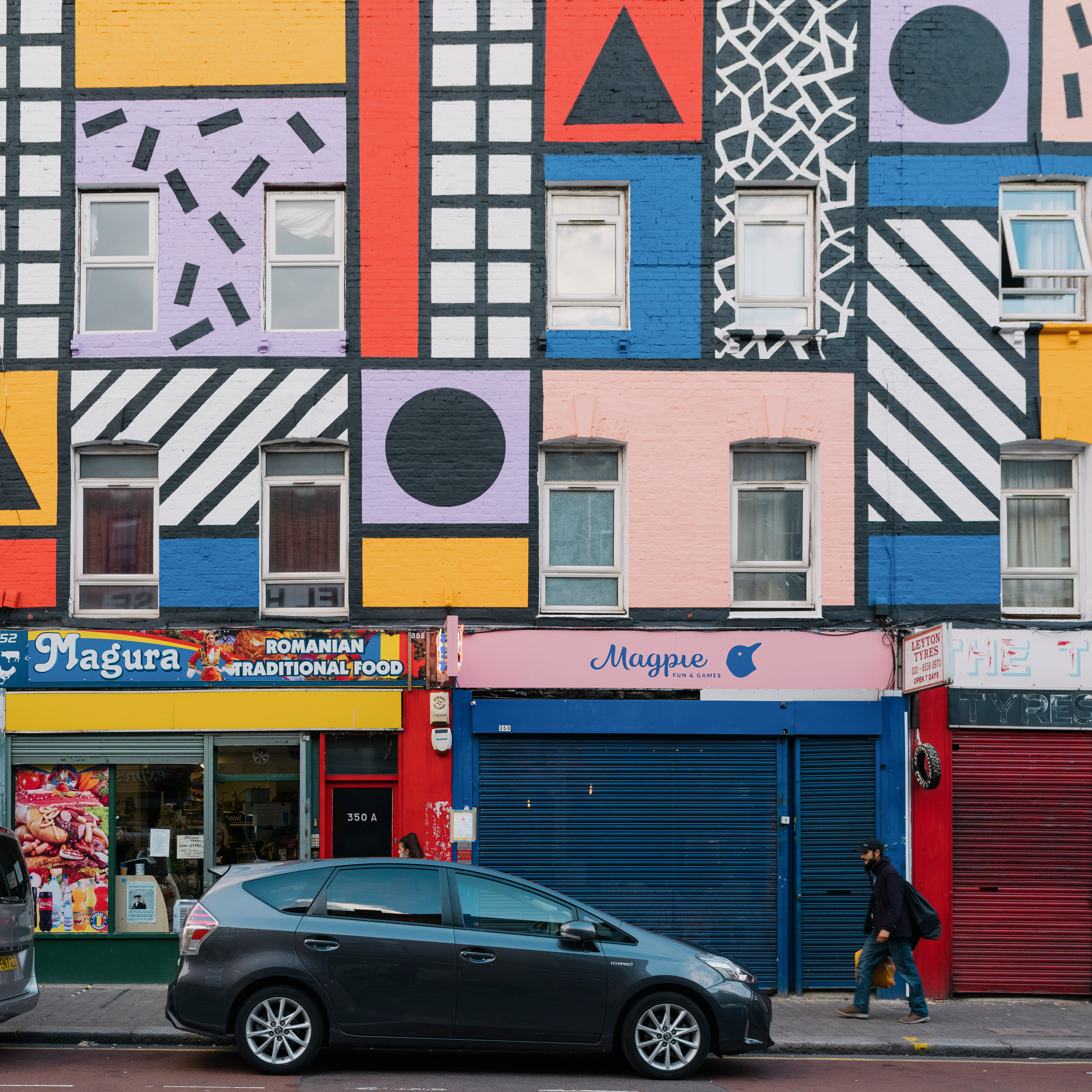 The residents of Leyton in northeast London crowdfunded the redevelopment of eight shops in their neighbourhood, calling on designer Walala to inject a pop of colour into an otherwise ordinary high street.

Walala used her signature vibrant, graphic style in an effort to capture the soul of the “exciting and creative area”. The designer sourced paint from the surrounding area in a bid to support local businesses.

Find out more about Walala Parade › 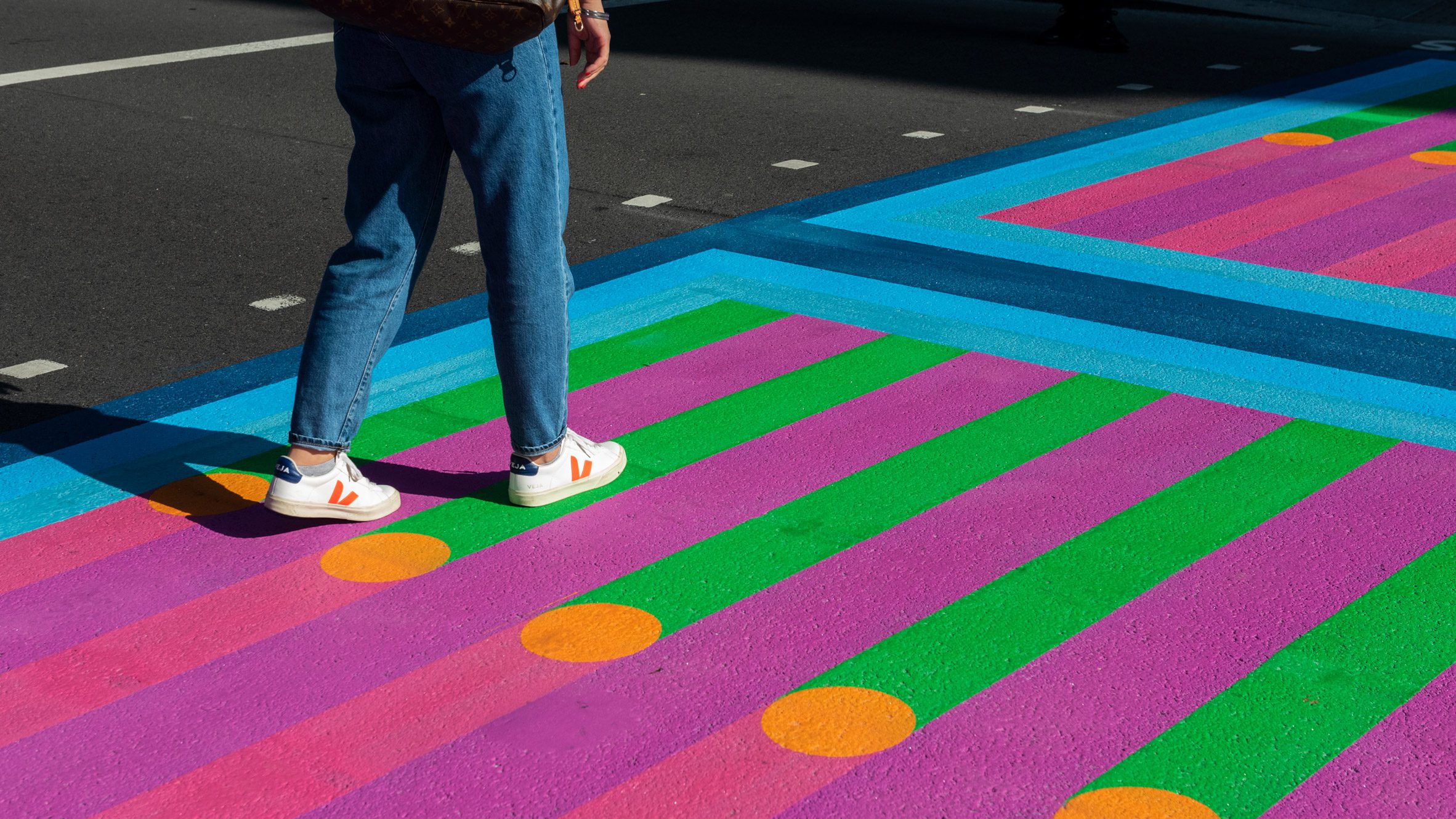 Bring London Together by Yinka Ilori

The joyful designs, which contrast starkly with the traditional London black and white zebra crossings, were intended to bring a moment of enjoyment to the thousands of people walking through London’s streets every day.

Find out more about Bring London Together › The Sun Pavilion by Morag Myerscough

British artist Myerscough built an eye-catching pavilion in Canary Wharf, London’s financial district, with the intention of creating a space for adults and children to enjoy in a post-lockdown world.

The pavilion stands out as a playful, brightly coloured addition to an area that is mostly known for its many steel and glass high-rise buildings.

Find out more about The Sun Pavilion ›

Designer and artist Adam Nathaniel Furman embellished what was already a bright red bridge over Regent’s Canal with stripes of paint in bright hues.

The pedestrian-only crossing, which was installed by Moxon Architects and Arup, provides commuters with easy access from King’s Cross station to the shopping district Coal Drops Yard.

Find out more about Esperance Bridge › The borough of Waltham Forest commissioned designer and artist Edward Crooks to create an artwork that covers the Rosebank arcade, one of the busiest thoroughfares in Waltham Forest.

The piece acts as a large-scale welcome mat and wall installation for shopping tourists as well as regular locals, echoing the energetic and vibrant spirit of the borough.

The piece was selected by Furman as an example of the New London Fabulous, a “highly aesthetic” design movement by a group of creatives working in the capital.

Find out more about Rosebank Arcade › A second creation by Walala, called Les Jumeaux, consists of two pedestrian crossings and seven murals on a building facade in the creative business area of White City.

The installation is the French designer’s first major outdoor artwork in west London and saw her reinterpret the area’s rich architectural details through a more colourful lense.

Find out more about Les Jumeaux› 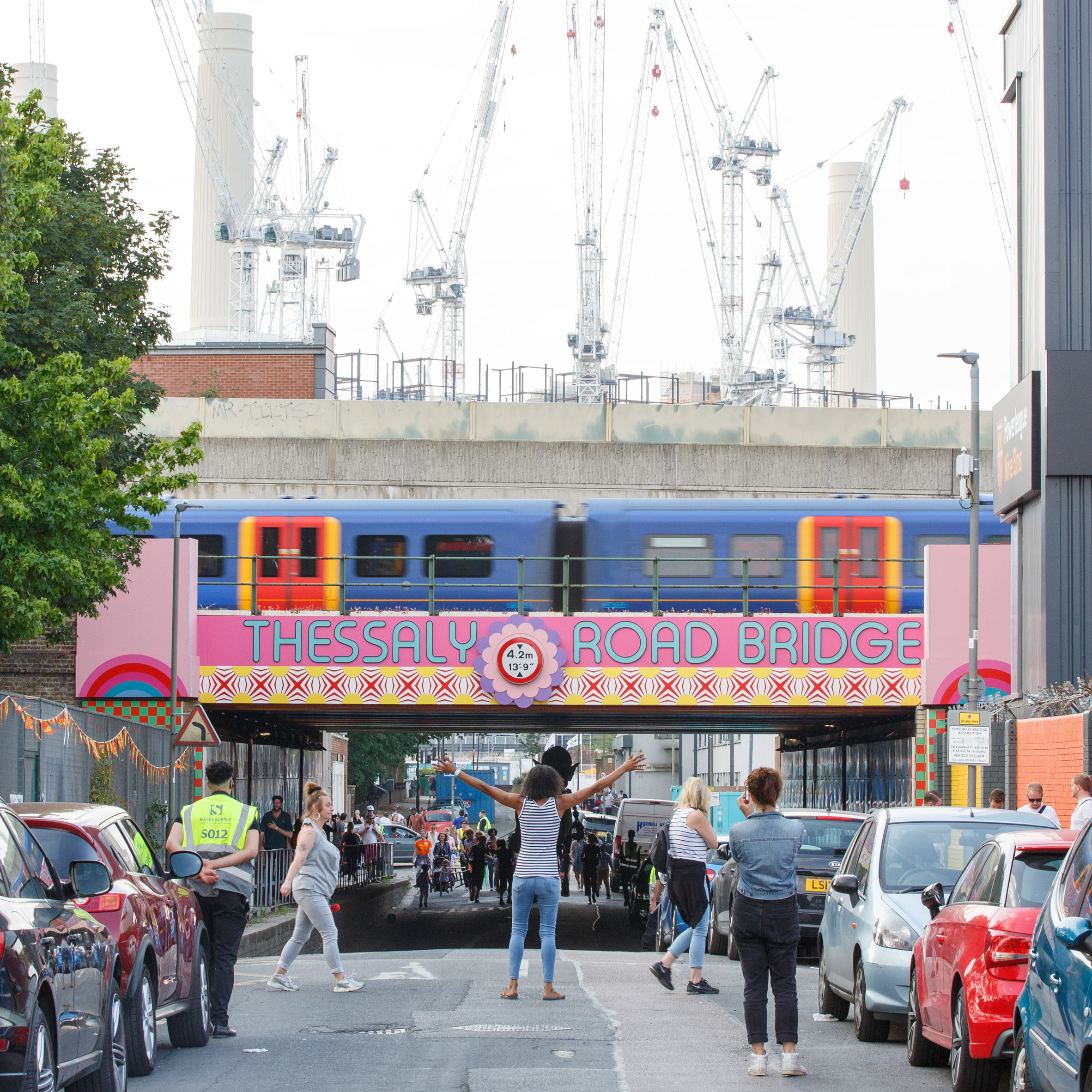 An array of 56 patterned enamel panels coated in 16 different colours were used to revive a bustling hotspot on Thessaly Road, southwest London.

In doing so, Ilori covered a railway bridge and underpass to transform what was once a “forbidding environment” into a site of joy.

Happy Street, which was the designer’s first public installation, was developed in collaboration with the local council, the residents of Wandsworth borough and a primary school.

Find out more about Happy Street›