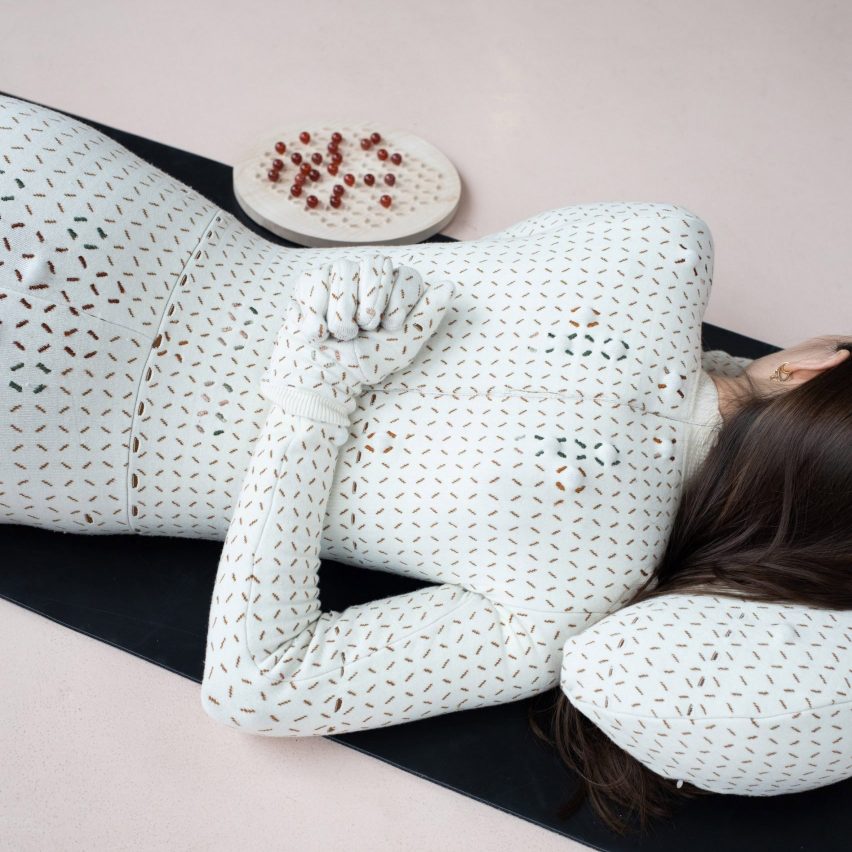 Design Academy Eindhoven graduate Laura Deschl has developed The Healing Imprint, a therapeutic garment that looks like activewear but is made to help heal trauma.

The project was developed to explore the potential of combining acupressure – a non-invasive practice originating in traditional Chinese medicine – with yoga-like movement to treat psychological trauma.

Deschl produced custom-knit garments with a grid stitched into them that allows small massage balls to be inserted and moved onto specific acupressure points on the body, feet, hands and head.

The garments’ aesthetic is similar to activewear or leisurewear, and a full set includes a bodysuit, gloves, socks and a pillow.

The idea is to combine acupressure with an embodied movement practice based on yoga, which would allow a person’s bodyweight to heighten the pressure at the targeted “acu-points.”

Deschl based The Healing Imprint on research that shows how physical therapies can be incorporated into psychotherapy to help people heal from psychological trauma, in an approach known as integrative therapy.

She was particularly inspired by the work of Bessel van der Kolk, whose 2014 book The Body Keeps the Score documents the effects of trauma and an array of methods that can be used to treat it.

“I was inspired by how he is incorporating ‘untypical’ ways of healing trauma, such as through yoga, tapping and community,” Deschl told Dezeen.

“My research also encompassed certain other thinkers, but their take on healing trauma through the body is somehow similar,” she continued. “One thing is certain: they are all convinced that the body needs to play a major role in overcoming the imprint left on the body caused by a traumatic event.”

Acupressure has been used to address symptoms of post-traumatic stress disorder, as well as trauma-related anxiety and depression.

With The Healing Imprint garments, the acupressure aims to help the wearer access buried memories or emotions, while the trauma-sensitive yoga practice would facilitate introspection around those recollections.

Deschl said that a person’s body and their emotions are “two elements that are crucial for one’s sense of self, but are often highly impaired as a result of trauma”.

“Many people with histories of trauma and neglect experience an extreme disconnection from their body due to a deep divide between the sense of self and sensory experiences,” said Deschl.

“The goal of this project is to help patients train embodiment and thus bring them closer to their bodies.”

One of The Healing Imprint garment sets is knitted from predominantly merino wool plated with an elastic yarn, which was produced specifically for the project.

A second set with meridian patterns is made from a recycled knitted athleisure fabric, while the massage balls are gemstones.

The Healing Imprint includes a set of illustrations showing where to place the balls for which symptoms, and Deschl worked with a psycho-motor therapist to facilitate test sessions with trauma patients.

Deschl tested the garments at Eindhoven mental health institute GGzE and is seeking funding to further develop the project.

A social designer and artistic researcher, Deschl has a background in fashion and textiles as well as yoga teaching.

The Healing Imprint is her graduate project from the Master of Fine Arts and Design at Design Academy Eindhoven and is emblematic of her interdisciplinary approach.

“The garment is not only an interface for an individual to access embodied knowledge and self-awareness, but also represents how design can converge fields such as science, business, medicine, psychiatry and textile-making,” said Deschl.

Other designers to have made tools for therapy include Ariadna Sala Nadal, whose Balisa kit is meant to help children express their emotions, and Nicolette Bodewes, whose tactile objects are to assist adults in talk therapy.

Photography is by Iris Rijskamp.