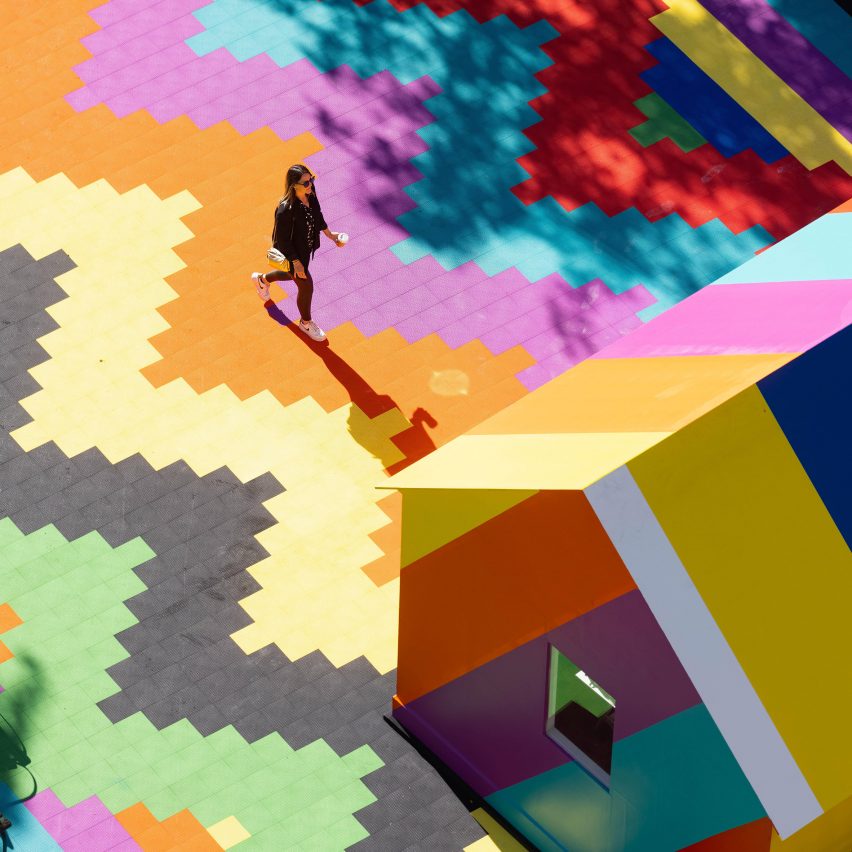 London-based artist Lakwena Maciver has painted a rarely used rooftop in bright colours and geometric shapes as part of a redevelopment of a London Underground station.

Called Back in the Air: A Meditation on Higher Ground, the artwork stretches over the 1,400-square-metre roof terrace of Temple Station in central London.

Maciver was commissioned by 180 Studios and Westminster City Council to paint the station’s roof terrace, which is located between the River Thames and the Strand.

The painting is meant to act as “a beacon of London’s recovery” as the city comes out of the coronavirus pandemic.

“Back in the Air is about connection,” Maciver told Dezeen. “I like to respond to the context of spaces when I’m making work in public spaces, and this felt really relevant here given the name Temple and the fact that the space is a raised platform, facing the heavens.”

“A lot of my work is concerned with this connection between above and below and between people,” she added.

Maciver used a kaleidoscope of paint colours including royal blue, vibrant turquoise and bright green in stripes, squares and text for her “contemporary vision of Paradise”.

After sketching out her planned designs, the artist translated her initial drawings into a pattern that was stuck to the roof using tiles that are usually used for sports arenas.

She chose the tiles as they are sturdy and the station’s roof couldn’t be disturbed.

“This was a really difficult site to respond to,” said Maciver.

“Having a vast half-acre of space to fill, with various obstacles within it, but also not being allowed to screw or drill anything onto the surface, and also needing to create something temporary, but that would also be weatherproof,” she explained.

“The connotations of both play and mosaics that the tiles brought with them really resonated nicely with the themes in the work.”

The phrase Nothing Can Separate Us can be seen at the entrance to the garden. For Maciver, this phrase has a personal meaning as she began making a painting with the same text for her home in 2020.

“Shortly after the pandemic broke out, we went into lockdown, and the painting took on a wider meaning,” she explained. “Those sentiments seem especially poignant now just coming out of lockdown and as the city comes back together.”

“I see my paintings as prayers and meditations, so it felt right to paint this on this raised platform to the sky, and for this mosaic of colours to flow outwards from it to cover the whole surface,” continued Maciver.

A specially constructed hut modelled on a London taxi driver’s shelter was also placed on top of the roof and painted in Maciver’s designs.

The charity Cabmen’s Shelter aims to provide taxi drivers with wholesome meals. One of its huts can be found on the ground level near Temple Station.

Commuters who use Temple station, which was built in 1870, are largely unaware of the expansive terrace above their heads.

The raised area is not visible from the street and is only seen by the few Londoners who can see it from their elevated places of work, or who work on nearby building sites.

The roof can be accessed via steps that lead up to the roof. Visitors to the artwork can walk across the colourful tiles and take in views across the River Thames towards the South Bank opposite.

Maciver is the first of a series of emerging artists who will redesign the roof terrace in a project that Westminister City Council and theCoLAB have called the Artist’s Garden.

The project forms part of a burgeoning design movement that Adam Nathaniel Furman has coined the New London Fabulous. The term is used to describe work that constitutes a “highly aesthetic, sensual and celebratory of mixed cultures” by a group of creatives working in the capital.

Photography is by David Parry/PA Wire.

The post Lakwena Maciver paints a "vision of paradise" on the roof of London tube station appeared first on Dezeen.