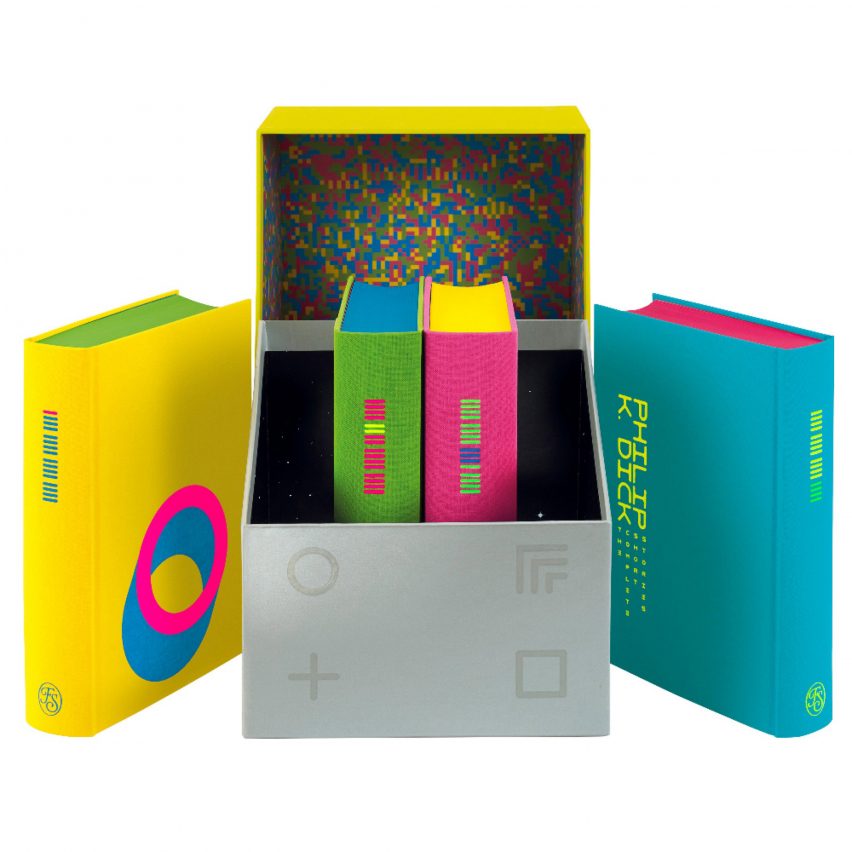 The four-volume hardback set brings together all 118 of the revered science-fiction author’s short stories and features illustrations by 24 artists, as well as neon book bindings and a presentation box designed by UK studio La Boca.

The project was art directed by The Folio Society‘s Sheri Gee and Raquel Leis Allion. The duo decided that, because of the breadth of the stories, they wanted to go beyond the usual approach of commissioning a single artist.

To create a contrast from the illustrations they brought in design studio La Boca, which tends to work in a bold and graphic style, for the books and packaging design.

La Boca’s approach for The Complete Short Stories is based on colours, symbols and codes.

“Primarily La Boca wanted the books to feel slightly mind-bending when seen in the flesh,” Allion told Dezeen. “Initially it was thought that the neon palette wouldn’t reproduce well on screen, but we were surprised that it worked and when the books are viewed in the flesh, they have that extra level of sensory stimulation.”

La Boca’s design has the books’ bindings, cover illustrations, page edges and ribbon markers rendered in a four-colour palette of highlighter pink, yellow, green and blue, but arranged differently on each volume.

While the first volume is yellow with green page-edges and a pink ribbon bookmarker, the next volume is green with blue pages and a yellow ribbon marker, and so on.

The covers are printed with graphic symbols designed to reference the Zener cards designed by US psychologist Karl E. Zener in 1930.

These were used to test for extrasensory perception (ESP) and chosen for the book covers because telepathy is a recurring theme in some of the short stories.

The symbols are screen-printed with fluorescent inks on the Duchesse cloth bindings. The same symbols are echoed on the relevant title page and spot-varnished on one side of the box.

Illustrations also feature on the inside of the box on two specially designed papers. There is a glitch-style grid pattern in the same four neon colours on the top part of the box, and a black night sky sparkling with silver stars inside the bottom part, both reflecting the science fiction themes in the texts.

“The inside of the box could become a forgotten void of space, which made La Boca think it would probably be exactly the type of place Philip K Dick would explore,” said Allion.

“The illustration is designed to be a kind of pixel camouflage that is in stark contrast to the solid colours on the outer side of the box,” Allion continued. “La Boca wanted the inside to hold a surprise after lifting the lid, like gazing into a fathomless digital world.”

The outside of the box is yellow and silver and is deliberately quite heavy, so that the lid needs to be lifted off with both hands.

“The illustration on top of the box is a sort of diving point; the reader is looking down on it whilst lifting the lid,” said Allion. “It’s designed to act as a signifier that you are in the process of entering the cosmic world of Philip K Dick.”

There are six illustrations per volume, representing a wide spectrum of styles and mediums. The set includes works by famous artists, such as Dave McKean and Georgia Hill, as well as creations by emerging practitioners.

The Complete Short Stories: Philip K Dick was published in a limited run of 750 numbered copies and sold out in three days.

The author is best known for the novels The Man in the High Castle and short story Do Androids Dream of Electric Sheep?, which was adapted into the movie Blade Runner.

The Minority Report, which was adapted into a movie by Steven Spielberg, is one of the 118 short stories included in this collection.

The Complete Short Stories: Philip K Dick was the public vote winner for graphic design of the year at the Dezeen Awards.

Other shortlisted designs include the Norwegian passport by Neue Design Studio and the Magic Canvas, a children’s psychotherapy tool by Magpie Studio.

The Folio Society is a UK publisher that produces illustrated hardback editions of classic fiction and non-fiction.

The design studio La Boca was founded in 2002, and its past work includes an illustrated film poster for the movie Parasite.