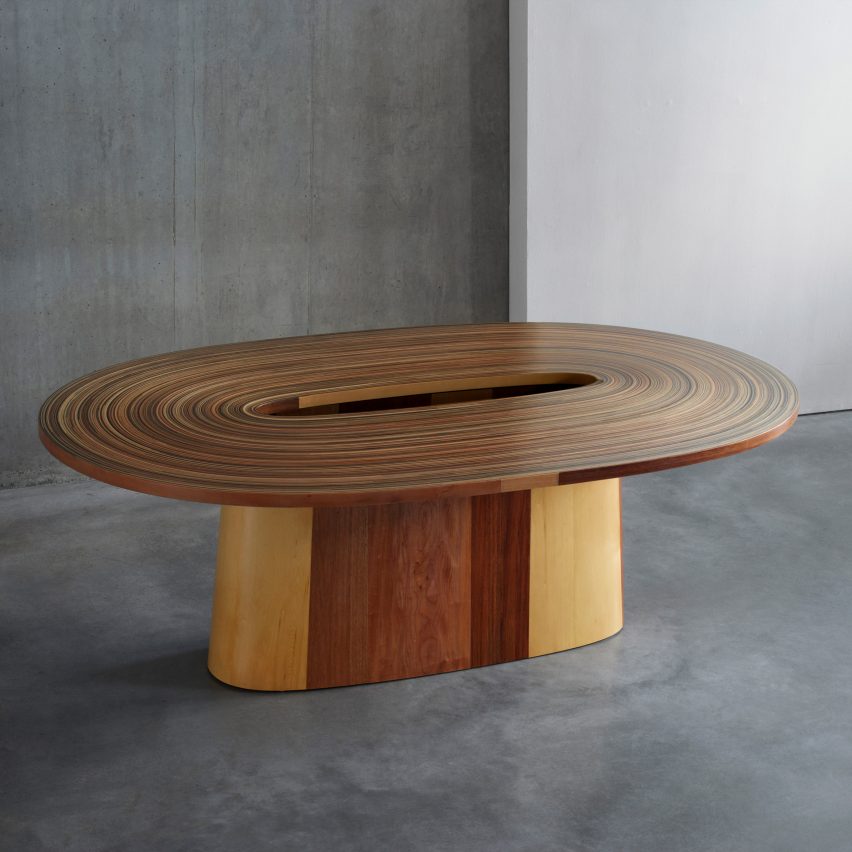 London-based designer Brodie Neill has used over three kilometres of timber taken from within a lake in Tasmania to create ReCoil, an oval dining table.

The designer used Hydrowood – comprising different types of wood that were recovered from the riverbed of Lake Pieman, Tasmania – to create ReCoil and a number of other items of furniture.

The trees were lost underwater in the 1980s when a forest was submerged for a hydroelectricity scheme. Huon pine, eucalyptus, Tasmanian oak, celery top pine, sassafras, myrtle and blackwood can all be found in the Pieman River valley.

In a recent interview with Dezeen’s founder Marcus Fairs at London Craft Week, Neill shared how the highly sought-after wood is extracted from the water.

“A company called Hydrowood has devised a way using modern technology to scan the lake by the riverbed to see the timbers that are there,” he said.

“They’re able to scan to see what it is and literally cut the tree off at the riverbed and pull them out of the water.”

The Tasmanian timber sourcing company uses a barge with a crane attached to reach far into the lake and pull the wood out of the water.

Offcuts or veneers were then sent to London where they were cut. Neill chose to use the offcuts in an effort to repurpose the parts that are most likely to go to waste.

“I was interested in trying to make use of the smaller and the forgotten pieces – the pieces that were discarded a lot from panel production and so on,” he explained.

“The veneer is also the most economical form to be able to transport the material and obviously this has come from Tasmania and my studio is here in London.”

A randomised algorithm set the patterns for Neill to execute for ReCoil. Using his “hands on” approach to craftsmanship, he spent 60 hours hand coiling the strips of wood. If the pieces were laid side by side they would measure three and a half kilometres long.

The lengthy process was in part due to the fact that working with wet wood forced the designer to adopt a more considered, careful approach.

This is the first time Neill has worked with material from his native country and using the wood proved to be a cathartic practice that reminded him of home.

“When working with [the woods], the aromas that they were giving off really took me back to those four years of art school and those are the building blocks of my career,” he recalled.

Coiling the veneers similarly gave Neill a nostalgic feeling, prompting him to call the table ReCoil for its connotations with remembering and reconnecting.

“It’s been a kind of connection of literally laying the layers around and around,” he said. “The process of actually kind of laminating it up was very therapeutic in a way so it was a real moment to kind of grow and reconnect.”

ReCoil isn’t the first piece of furniture that Neill has created that explores the relationship between material and waste.

The designer used ocean plastics to create a terrazzo-effect table called Gyro, while his Stella Nova table for London studio Made in Ratio was made from recycled aluminium and bamboo.