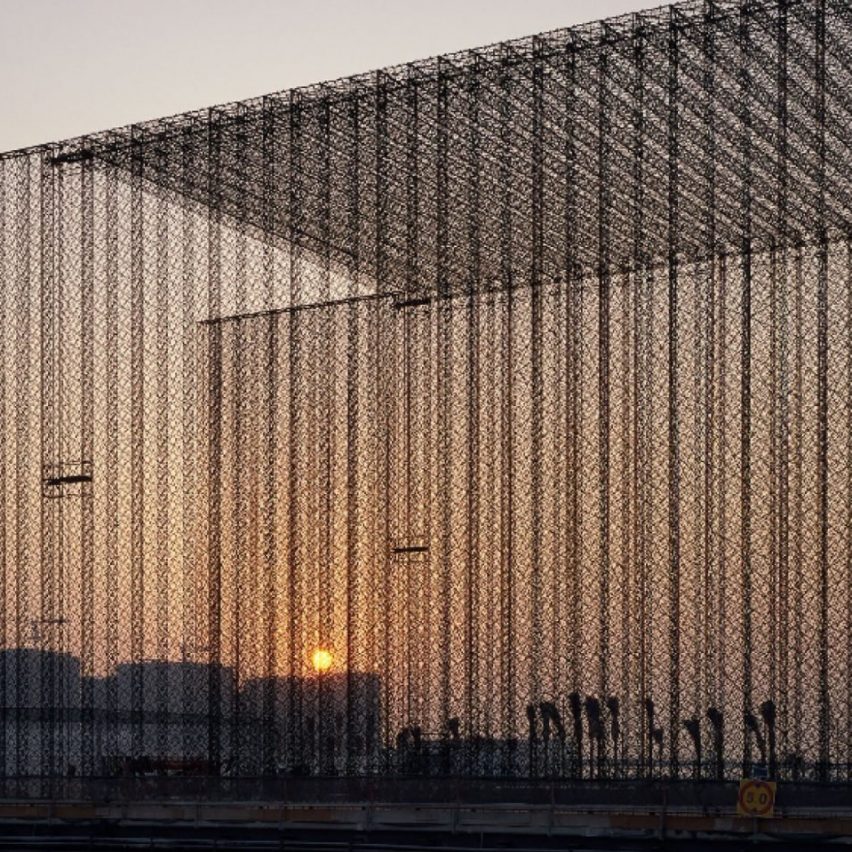 Projects by Marjan Van Aubel Studio, The New Raw and 10 other studios have been chosen by Dezeen readers as winners of the Dezeen Awards 2021 public vote in the design categories.

Other winners include Aether Eyewear for its audio eyewear collection and Asif Khan for its towering entry portals for the Dubai 2020 expo.

A total of 53,400 votes were cast and verified across all categories. The results of the public votes for the Dezeen Awards 2021 design categories are listed below.

Dezeen Awards 2021 public vote winners in the architecture categories were announced on Monday, the interiors winners were announced yesterday, the sustainability and media winners will be revealed tomorrow, followed by the studio winners on Friday.

To receive regular updates about Dezeen Awards, including details of how to enter next year, subscribe to our newsletter.

Below are the public vote results for the design categories:

Soda, a project by Yiannis Ghikas for Miniforms, has won furniture design of the year in the public vote with 31 per cent of the votes.

Each table is blown, extruded and shaped by three glassmakers from one volume of glass.

The runners-up include Pegg Furniture with 30 per cent, TT_01 by Poesenvanhiel Architects with 14 per cent, Mod Media Furniture by Noo.ma with 10 per cent, Plint by Cecilie Manz for ​​Takt with nine per cent, and Brise by Wonho with four per cent of votes.

The Ermis Chair is a limited series by The New Raw. Each chair is 100 per cent recyclable and is created from third-generation plastic waste from the company’s production line.

The project received 44 per cent of the public’s votes, making it the winner of the seating design category.

The runners up in this category are Puffy Lounge Chair by Faye Toogood for Hem with 22 per cent, Core and Remnant by Sancal with 20 per cent, Gamar Chair & Stool by Spacon and X with eight per cent, and Evo-C by Jasper Morrison for Vitra with five per cent of the votes.

Sunne is a self-powered light that harvests and stores solar energy during the day and releases it at night in a way that imitates natural sunlight.

This lighting design project by Marjan Van Aubel studio is the public vote winner in its category, receiving 19 per cent of votes.

Close behind in the running are OBJ-01 by Manu Bãnó, Dune by LZF Lamps and Alis by Potemine with 18 per cent, Daylight by Dean Norton with 15 per cent, and Origine by Davide Groppi with 12 per cent of votes.

Light Bureau’s design for Maggie’s Leeds aims to evoke a sense of calm by providing a visual connection between the interior and surrounding landscape through lighting.

This winning project received 34 per cent in the public vote.

A collection of wall tiles made from recycled eggshells has won homeware design of the year in the public vote. CArrelé by Nature Squared received 31 per cent of votes.

In close pursuit was The Ellipse Collection by Armadillo with 29 per cent, followed by Chromarama by Kukka with 12 per cent, Super Circular Department Store by GoodWaste and Rug collection Lutetia and Juno by Studio Agne with 10 per cent, and The Misused by Studio Liang-Jung Chen with nine per cent of votes.

Modus by Bunkholdt&Kirkestuen is the winner in the workplace design category this year with 30 per cent of votes. It’s a modular tabletop system that aims to induce interaction through shape and texture while adding a fun element to office spaces.

Voted most popular with 38 per cent in the wearable design category this year is the new eyewear collection by Aether. Using Bluetooth and new sound technology, the audio eyewear allows you to listen to music and take calls through your sunglasses.

The runners-up are Convertibles – Clothes That Kids Can Make by Almaborealis with 26 per cent, Adaptive Womenswear by Petit Pli with 17 per cent, Elvie Curve by Elvie with 11 per cent, and Scaled by Scaled with eight per cent of votes.

Our readers have chosen Forest Crayons by Playfool to be crowned product design of the year in the public vote. Receiving 33 per cent of votes, the project acts as an incentive to use and appreciate Japan’s vast areas of unmaintained woodland in new unique ways.

The runners-up include My Football Kit by Nendo for Moltern Corporation with 31 per cent, Volta Zero by Astheimer with 18 per cent, The Pickup Truck by Canoo with 14 per cent, and InstaSwab by OPT Industries with four per cent of votes.

The box set received 24 per cent of votes in the graphic design category, making it a public vote winner.

The runners up are Moholy-Nagy Foundation identity by Pentagram with 21 per cent, Bicycle Parking Garage The Hague by Silo with 19 per cent, The Norwegian Landscape by Neue Design Studio with 16 per cent, Stories in Sounds by Nord ID Riga with 13 per cent, and Magic Canvas by Magpie Studio with seven per cent.

The Faith and Liberty Discovery Center combines touch and lighting technology to invite reflection on America’s past and present. Situated in Philadelphia’s Independence Mall, the exhibition design by Local Projects received 36 per cent of votes.

Next up is V&A Fashioned From Nature at the Design Society by Studio 10 with 30 per cent, Backstage by Tinker Imagineerst with 19 per cent, No Show by Youssofzay + Hart with eight per cent, and Re-Source by Lanza Atelier with seven per cent of votes.

Asif Khan’s Entry Portals are three 21-metre-high doorways that welcome visitors into each Dubai Expo 2020 district. Made from modular units of carbon fibre, the balance of material and open space makes the structure appear translucent when viewed from afar.

Entry Portals is the installation design of the year as chosen by the public, with 49 per cent of votes.

The runners-up are Secret Sky by Alibi Studio with 22 per cent and The Plywood Protection Project by Worthless Studios with 11 per cent, followed by Remembering a Brave New World by Chila Kumari Burman and Drawing Fields by Outpost Office with nine per cent of votes.

Cladding panels made from industrial paper sludge and consumer cardboard waste by emerging Barcelona-based company Honext have won sustainable design of the year in the public vote.

The panels are cellulose-based, non-toxic, as well as 100 per cent recycled and recyclable. This innovative material received 23 per cent of votes.

Close behind are Aquastor by Zihao Design and Common Sands – FORITE tiles by Studio Plastique x Snøhetta x Fornace Brioni with 22 per cent, Alive by the Living and Ptacek Home Chunk Line by Ptacek Home with 12 per cent, and Notpla by Superunion with eight per cent.