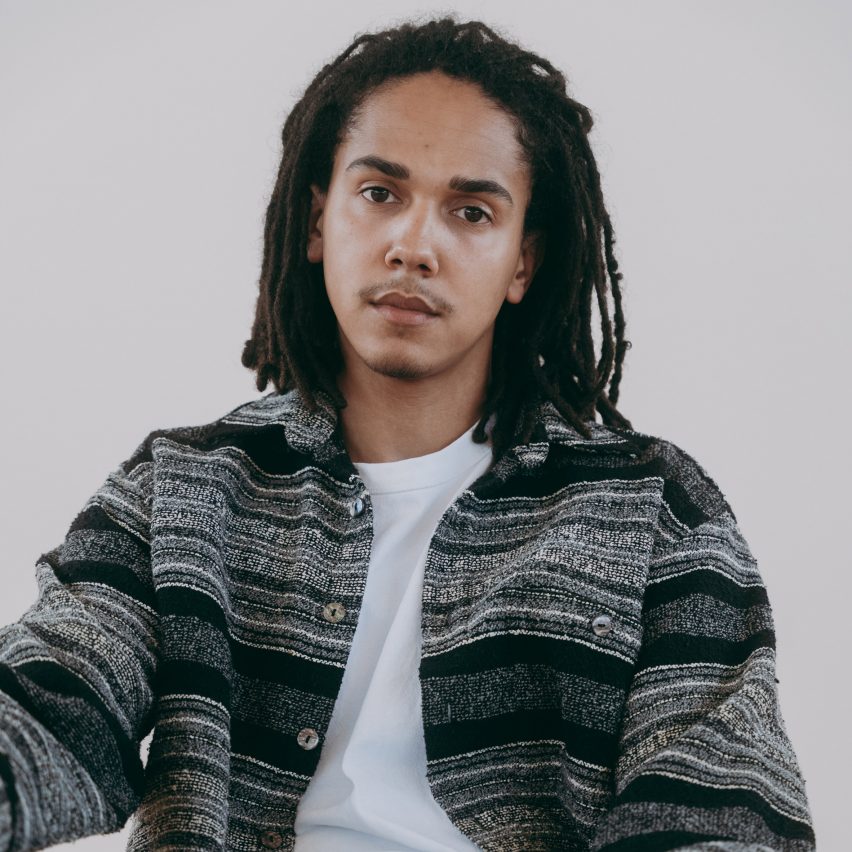 Nottingham-based designer Mac Collins recently won the Emerging Designer Medal at the London Design Medal awards. In an exclusive interview, he tells Dezeen how he doesn’t want to be pigeonholed as a “Black designer”.

The 26-year-old furniture maker, who graduated from Northumbria University three years ago, is one of a small number of Black designers working in the UK.

He told Dezeen that work by Black designers is rarely covered in university courses.

“I didn’t really know of any Black designers,” said Collins. “They weren’t put to you by your college or university. And if it’s not within the curriculum, you don’t just naturally come across it.”

Instead, Collins looked to the American civil rights movement and artists operating at that time for motivation. His dissertation explored the roles and responsibilities of the Black Arts Movement in the 1960s and 1970s.

This led him to Afrofuturism – the reimagining of the Black experience using science fiction and fantasy – and his breakthrough Afrofuturism-informed chair.

Made from ash and oak wood, the chair went into production with British furniture producer Benchmark in 2020. Its throne-like shape is designed to empower its sitters.

“It’s about being imaginative about the future”

Although Collins “genuinely was not aware of the film”, the chair’s launch coincided with the release of Black Panther, which brought the term Afrofuturism into public consciousness.

“I thought, ‘we’ve got this chair – would it work to elevate the person within it?'” Collins remembered.

“It’s being imaginative about the future in a way that presents Black people in a light that we particularly hadn’t been presented before,” he added.

Collins often draws on his own personal history for his furniture. Born and raised in Nottingham with six sisters, he grew up listening to his grandma’s stories about her experience living in the Caribbean and migrating to the UK as part of the Windrush generation.

“My grandma has all these really funny, really interesting stories from what she saw,” he said. “I feel like sometimes these things [his designs] are a way to feel like I can connect back to these stories.”

“I don’t want to be pigeon-holed”

However, Collins doesn’t want his heritage to define his work. He was produced work for a range of brands, including a homeware range for Finnish design brand Vaarnii.

“I’m quite keen to put across that I am working on projects that represent my heritage,” he said.

“But at the same time, I’m also working on projects that do not do that: I can do both of these things and I don’t want to be pigeonholed into a position where people then want to get me involved in a project because it fits a narrative.”

According to research by Ethiopian American industrial designer Jomo Tariku, just 0.32 per cent of the furniture produced by leading brands is created by Black designers.

Collins is aware of his position as a visible Black designer, but is also concerned about tokenism.

“People have reached out to me for certain things, I imagine because it’s convenient to present me in that position for the narrative that they want to push” he said.

“I’d like to think I’m having success regardless of my skin colour.”

“To exhibit at the Design Museum is huge”

Collins recently won the Emerging Designer Medal at this year’s London Design Medal awards, which recognises an impact made on the design scene within five of graduation.

He also designed a chair for an exhibition at the Design Museum by Wallpaper* and the American Hardwood Export Council (AHEC)’s Discovered, proved to be a form of escapism or a “liberating project”.

“To step out of the pandemic world and to work on a project that was kind of open to your interpretation was really great,” he explained.

The designer particularly enjoyed exploring how to work with cherry timber – a material which he hadn’t worked with before.

Aside from playing with materials, the exhibition marked a pivotal moment in Collins’ career.

“To exhibit at the Design Museum is huge,” he says. “That’s a massive thing for me to be able to say, even if I sack off design tomorrow.”

The post "I'd like to think I'm having success regardless of my skin colour" says Mac Collins appeared first on Dezeen.