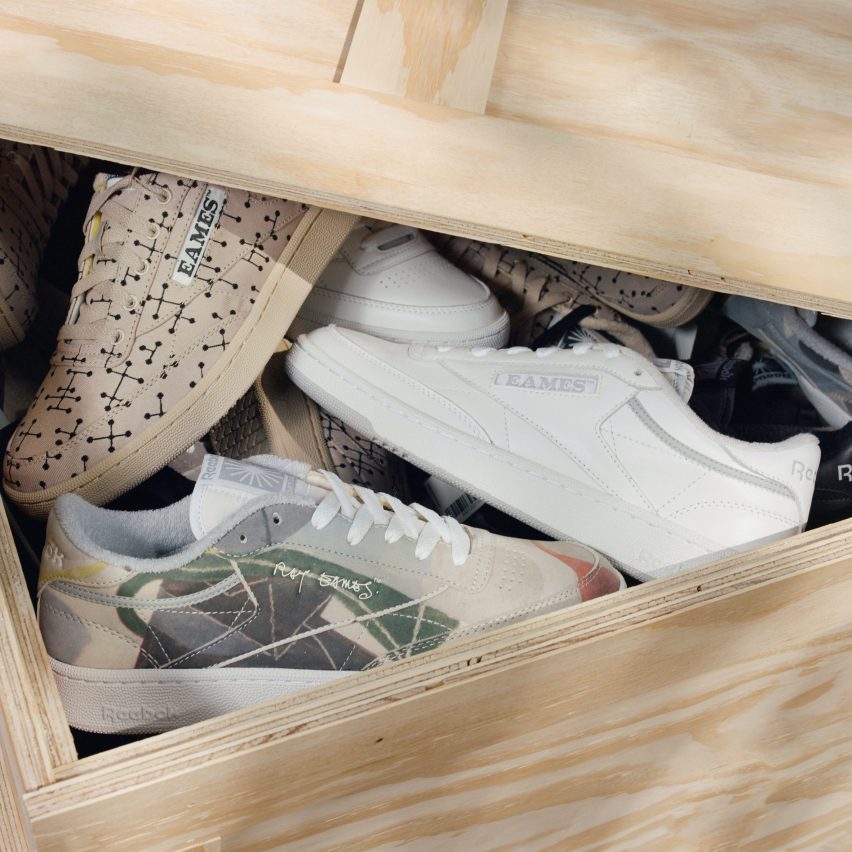 British sportswear brand Reebok has partnered with Eames Office to design a range of trainers informed by Charles and Ray Eames work and paintings.

“Known for their ground-breaking furniture creations for Herman Miller and Vitra, the husband-and-wife team redefined post-war American design and shaped the 20th century with their playful yet purposeful sensibility,” said Reebok.

“Eames design represents a belief that the objects in our everyday life should enrich our existence and transcend utilitarian function to connect with people on a personal level.”

To create the collection, which initially contains four designs, the designers drew on the Club C silhouette, a tennis shoe first released in 1985.

One pair is decorated with the Dot Pattern, designed by Ray Eames in 1947, while the other is covered in a reproduction of her Composition painting from 1939.

All of the shoes in the Reebok x Eames Club C Collection will be packaged in a shoebox informed by the iconic Eames house — also known as Case Study House No. 8 in Los Angeles.

An example of post-war suburban architecture, according to the brand it is “a tribute to the couple’s design ethos and an exemplar of sustainable building”.

Like the original Reebok sneaker, the shoes have a soft leather and lightweight midsole cushioning.

The trainers in this collection have been updated with Eames logos on the tongue, outer side and laces. Inside the shoe, the insole is illustrated with a colourful triangle print, as “a tribute to the Eameses’ sublime mastery of detail”.

Alongside the trainers decorated in patterns, Reebok and Eames Office designed a pair of white and a pair of black trainers called the Reebok x Eames Black & White Club C.

“In line with Charles and Ray’s commitment to accessible design that responds to the needs of the user,” it continued.

“The collection highlights the rebellious spirit and optimism of the Reebok Club C while complementing the Eameses’ vision of accessible design.”

Charles and Ray Eames are considered to be two of the most influential designers of the 20th century, having produced some of the most famous furniture pieces in modern design history. The pair are responsible for the Eames Lounge chair which was given a Vitra update in 2016.

The Conran shop also released a version of the chair which had an updated shell and upholstery. Today, the Eames Office is run by the third generation of the Eames family.