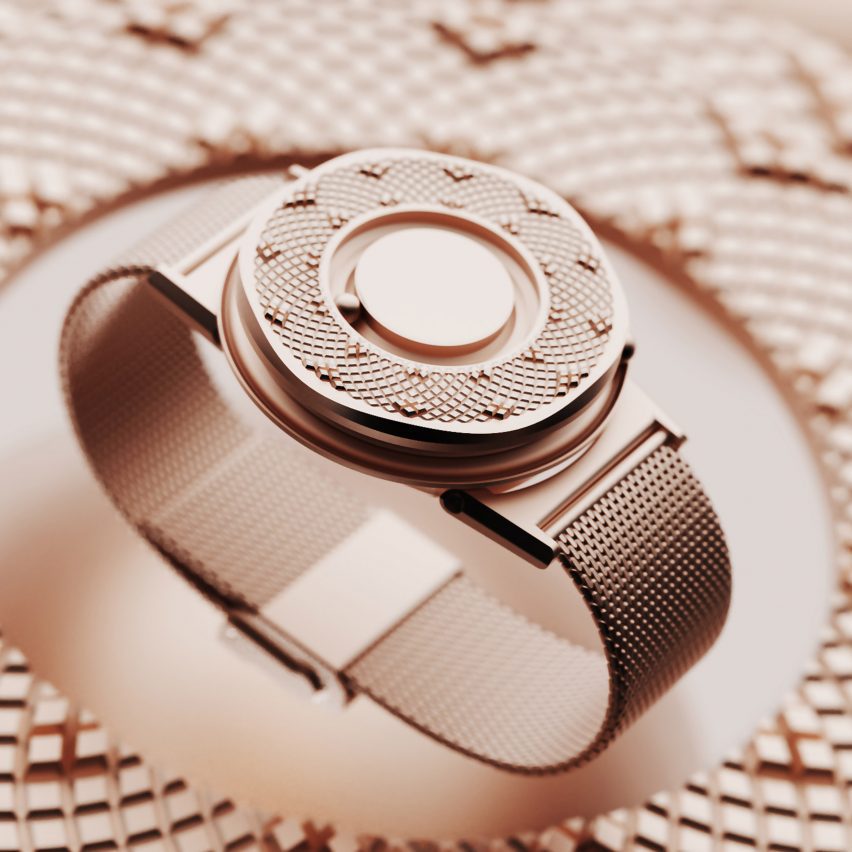 Dezeen promotion: Dezeen has teamed up with watch brand Eone to offer its readers the chance to get an early-bird discount on the brand’s latest model, which features interchangeable dial surrounds.

Launching on 15 October 2021, the Eone Switch comes with interchangeable dial surrounds that twist on and off to allow users to easily switch the look and feel of their watch to suit their style and mood.

Dezeen readers who want to be the first to get in-depth development updates, prototype information, free wallpapers, and early-bird access to the launch of the Switch are invited to sign up to the Eone Switch pre-launch page.

Signing up will also enable readers to save upwards of $65 USD on the watch’s launch price.

Designed to appeal to both visually impaired and sighted users, Eone’s tactile timepieces are distinguished by a face with a ball bearing that gives wearers the option to tell time by using their sense of touch or sight.

“The ball on the outer edge is the hours, and the one on the face – minutes,” explained Eone of its new design. “Reason being, when we did the original focus group testing in 2013, blind users found it more useful and important to tell the minutes first, as the hours change less frequently.”

The brand was launched by MIT graduate Hyungsoo Kim in 2012. Its first braille timepiece, the Eone Bradley, won a Red Dot Design Award and the Design Basis 77. It was nominated for the Design Museum’s Design of the Year Award and was also awarded the Da Vinci prize.

The brand has also created an exclusive limited edition watch in collaboration with Dezeen.

The new Eone Switch follows in the Eone Bradley’s footsteps, retaining the accessibility, quality and style of the original but with plenty of new features.

“The team collected extensive feedback from their community, taking note of what people love about the design and where it could be improved,” said Eone. “These insights raised questions that fuelled a meticulous and challenging redevelopment process, and this is how the Switch evolved.”

The team looked specifically at how improvements could benefit both blind and sighted users, and how the level of quality and innovation could be improved while still producing a product that represents value for money.

The new Eone Switch – available in silver, black and rose gold – features an interchangeable “Ring”, which becomes the outer section of the dial. By switching Rings, the look and feel of the timepiece can be customised to suit the wearers’ style and mood.

The two Rings included with the Switch match the colour of its stainless steel mesh bracelet, which will initially be available in black, silver and rose gold.

One Ring features minimal 12-hour markings, reminiscent of those found on the earlier Eone timepieces.

The second features a contemporary, interlaced, guilloche-style design inspired by patterns found in ancient architecture – guilloche is a mechanical engraving technique, produced by a special lathe that dates back to the 17th century.

Inspired by the way camera lenses are attached, a patent-pending twist-lock mechanism for switching the Rings makes the process quick and easy and doesn’t require any tools. Eone said that more Ring designs are in the pipeline for next year.

The Switch also comes with an improved case in a soft hexagonal shape with an increased number of touchpoints to make it even easier to feel the time. Its outer walls taper inwards to improve the visibility of the “minutes ball”, without compromising its tactile function.

Those that sign up to the Eone Switch pre-launch page will be able to save upwards of $65 USD upon the timepiece’s launch, when the expected MSRP will be $360 for the silver and rose gold finishes and $375 for the black.

The Eone Switch will launch on Kickstarter on 15 October 15. To find out more about the collection visit the Eone website.

This article was written by Dezeen for Eone as part of a partnership. Find out more about Dezeen partnership content here.