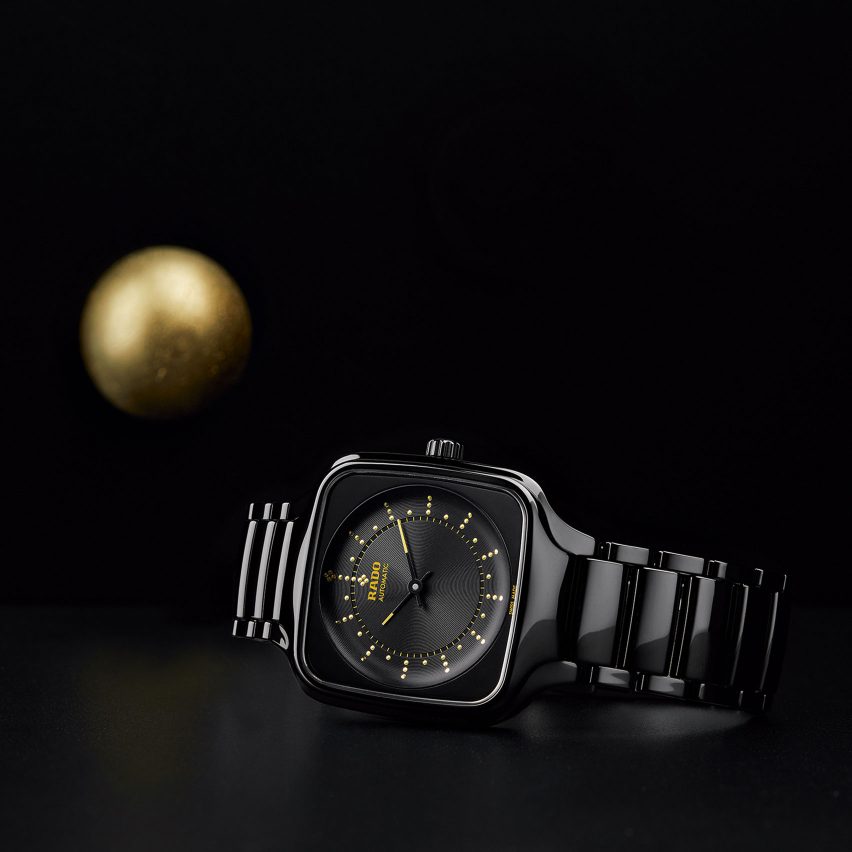 Designer Yuan Youmin explains how he created a special edition of Rado‘s True Square watch by drawing from traditional Chinese measuring instruments in this video produced by Dezeen for the Swiss watch brand.

Yuan drew inspiration from a traditional measuring device called a steelyard to design the watch for Rado, which is called Rado True Square True Heart.

Steelyards work by using a sliding counterweight to counterbalance the load of an object placed in a tray at the end of a rod to indicate its weight.

“Steelyards have been anchored into Chinese life for almost two thousand years,” Yuan explained in the video, which Dezeen filmed at his studio in Hangzhou.

“They consist of a graduated measuring rod, a weighing tray and a movable counterweight.”

Yuan took the dot graduation marks on a Chinese steelyard rod and used these as the basis for the hour markings on the timepiece.

“I used the dot graduation marked on the beam of a steelyard as a motif for the watch,” he explained.

“The lever arms of the scales become the slender watch hands, the round dial represents the weighing tray.”

The markings on the watch face are gold coloured. The back of the watch case features the representation of a phoenix.

“On the back of the watch case is an image of a phoenix, which symbolises rebirth of traditional elements,” said Yuan.

“The watch is made from Rado’s high-tech ceramic material, which is lightweight, scratch-resistant and pleasant to touch,” said Yuan.

“The importance of craftsmanship is what unites ancient Chinese culture with the precision of Swiss watchmaking.”

Rado has collaborated with a wide range of designers around the world to create special editions of its True Square watch.

Yuan is a graphic designer, lecturer and curator based in Hangzhou, China. He runs a design agency called STUDIO0909 and is a professor at the China Academy of Art.

Yuan believes that the strength of his design lies in the rich history that inspired it.

“The watch brings together thousands of years of Chinese culture with contemporary minimalist design to create a sophisticated timepiece that combines different cultures and epochs,” he said.

This video was filmed by Dezeen in Hangzhou, China.

This video was produced by Dezeen for Rado as part of a partnership. Find out more about Dezeen’s partnership content here.