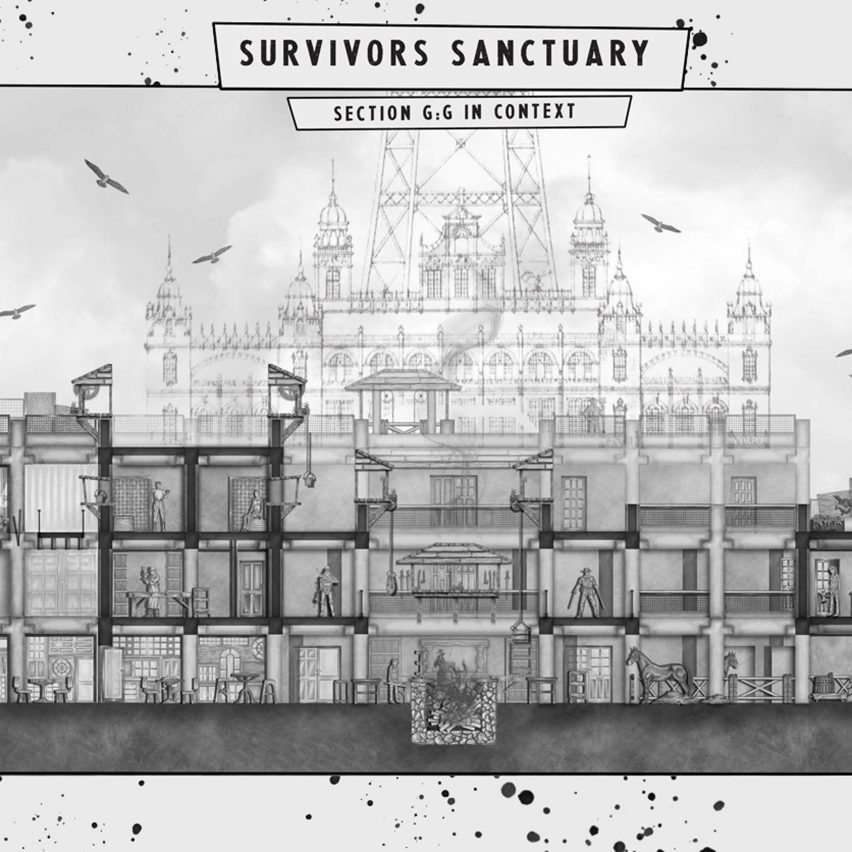 A “Recycled Fun Palace” and pottery studios for autistic and non-verbal people are included in Dezeen’s latest school show by Leeds Beckett University.

Also included is a project that imagines a post-viral Blackpool and another that explores the idea that colonising another planet is the solution to climate change.

“Leeds School of Architecture questions what architecture and the built environment can contribute to the world we live in from a cultural, social and political point of view. As a result, we have expanded modes of practice, research, and inter-disciplinary work to inform new critical voices and collectively empower creative minds to tackle our current environmental and ethical challenges.

“Our continued school ethos of collaboration enables new design problems and solutions to emerge, and the projects exhibited within this showcase crucially engage with this theme.

“There have been many student successes as a result of the school’s continued collective action, studio agendas, and the commitment of its students and course staff teams.

The Survivor’s Sanctuary (The Black Plague of Blackpool, The Walking Dead) by Dominic Stewart

“Once a hamlet by the sea, Blackpool emerged as a significant seaside destination for the well-to-do in the nineteenth century. Since this period of boom, however, it has suffered a decline, and although it remains a destination, it currently exists in two states lodged between the permanent – its residents – and the transitory – its fleeting visitors.

“The project imagines a post-viral townscape that questions ideas of community and the fragile state of our urban fabric. Set within a global pandemic, the rebirth of civilisation forces inhabitants to examine historic ways of building whilst developing technologies of energy production.

“The Survivor’s Sanctuary proposes a future that challenges ideas of self-sufficiency, sustainable building, and the structural adaptability of reclaimed materials. A testbed for ideas, the success of the future lies in the hands of those who have survived.”

“Our design studio was awarded third prize. From each student’s contribution to the competition, a community institute proposition was developed.

“The Recycled Fun Palace reuses a disused gasometer. The immense structure takes on a new role, acting as the framework for a Cedric Price-inspired superstructure. In response to the ever-increasing climate emergency, the new architecture has been constructed by reusing refinery infrastructure.” 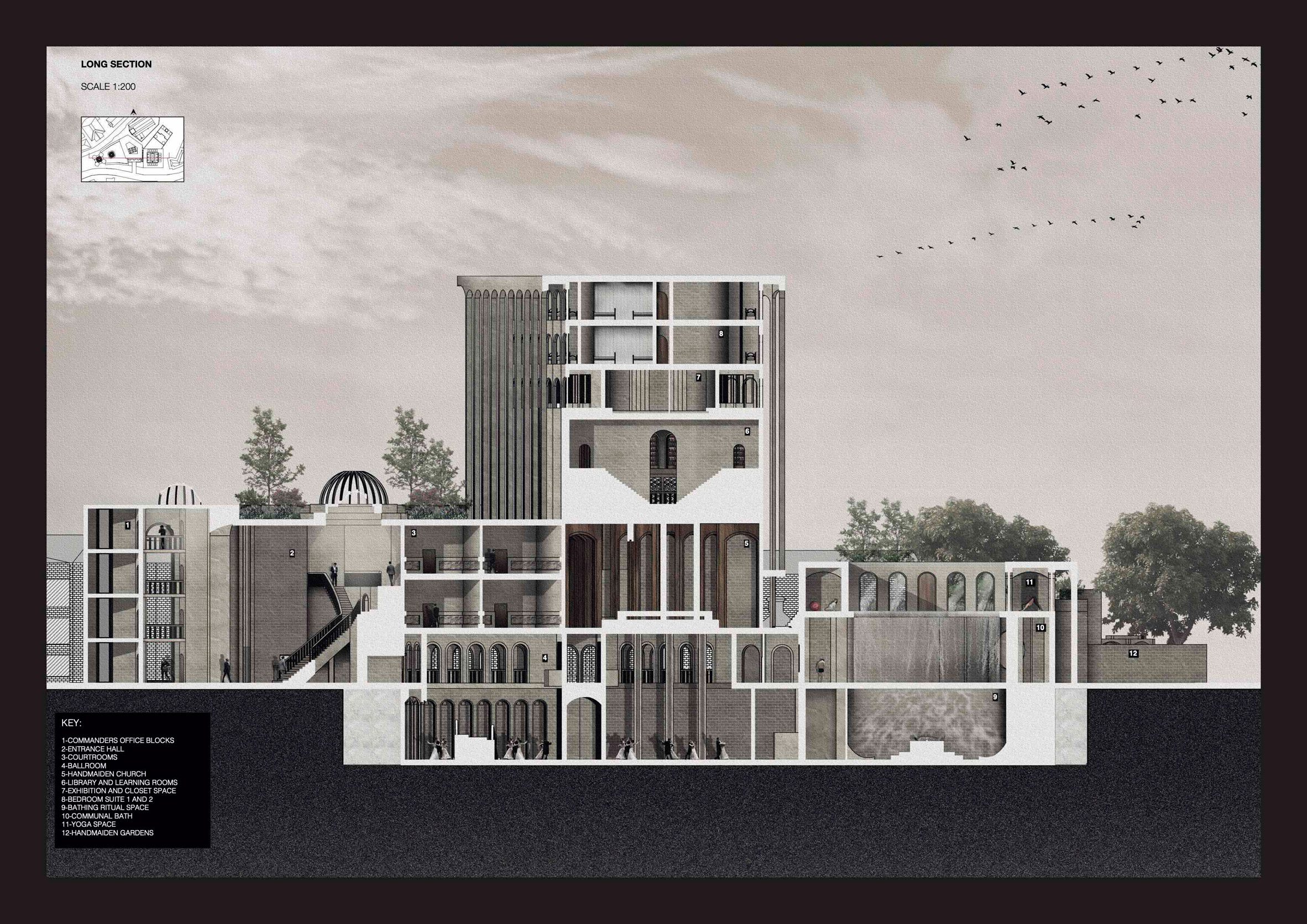 The Seven Vails of The Lord by Cassie Norrish

“The Abstract Machines studio projects were based in York and explored the following propositional themes. Research into the cultural manifestations of political parties with students defining their position; exploration of the spatial systems through which party organisations could manifest themselves; and how an architectural language can represent the ideals and values of the defined organisation within a particular culture.

“The project deconstructs the faith’s given axioms through a series of narrative spatial sequences overlaid with subverted historical and contemporary church rituals.” 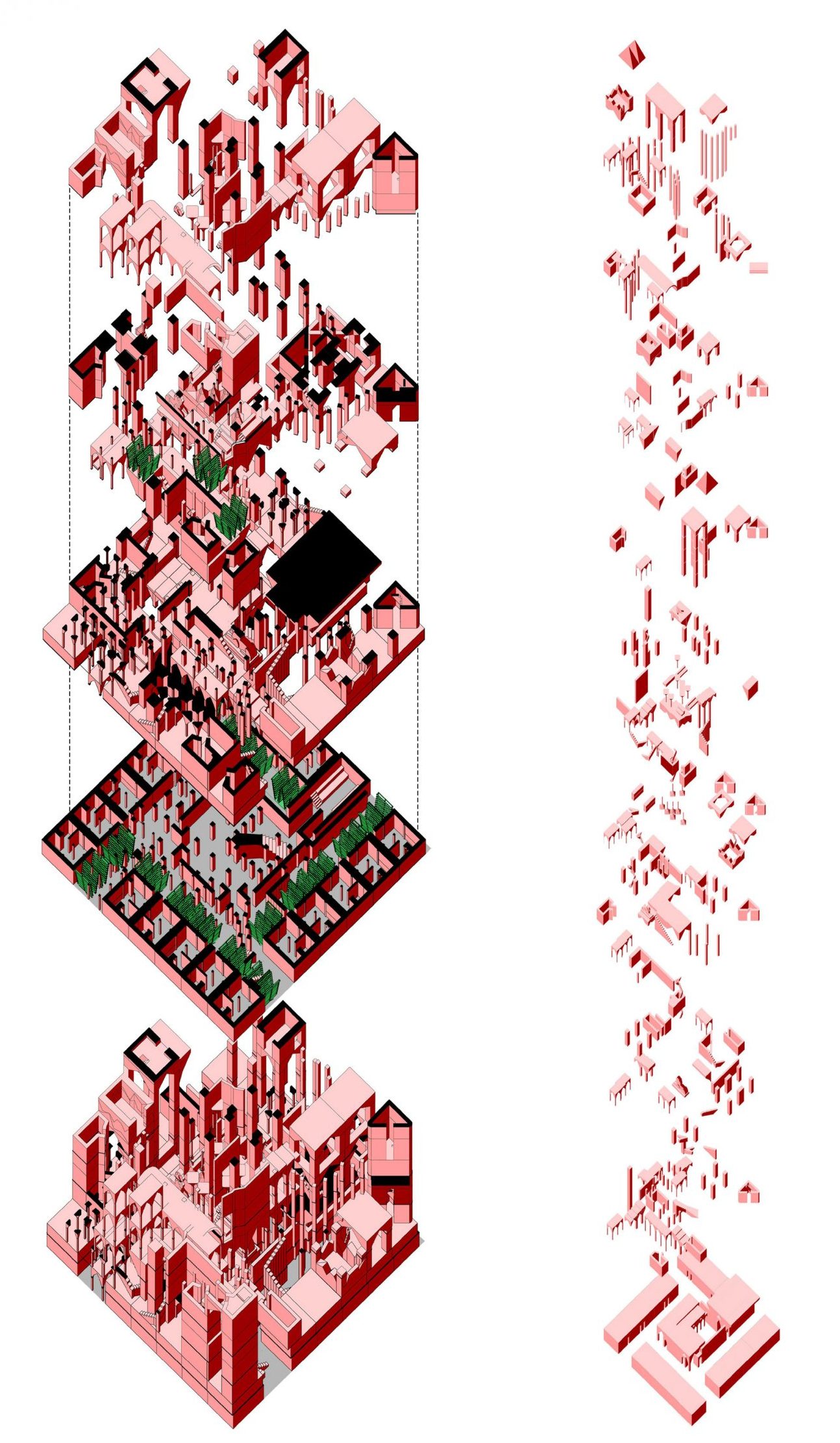 The Colony by Sam Pick

“This studio explored plans. It considered how they are created and what implications this method has on their realisation as spaces.

“Students developed unique approaches to plans as counter positions to rational 2D methods. Projects were set in Greenwich, with students given free control over briefs and programmes to explore their approaches.

“This project proposes that colonising another planet is the only response to the increasing danger of climate change. The ‘colony’ uses 3D-printing methods to explore spatial limitations and consider how the inhabitants might cope with being in control of their own environment.

“The spatial consequences of 3D printing are explored alongside a politically charged narrative over time, with the colony inhabitants coming together and pulling apart as they modify their surroundings.” 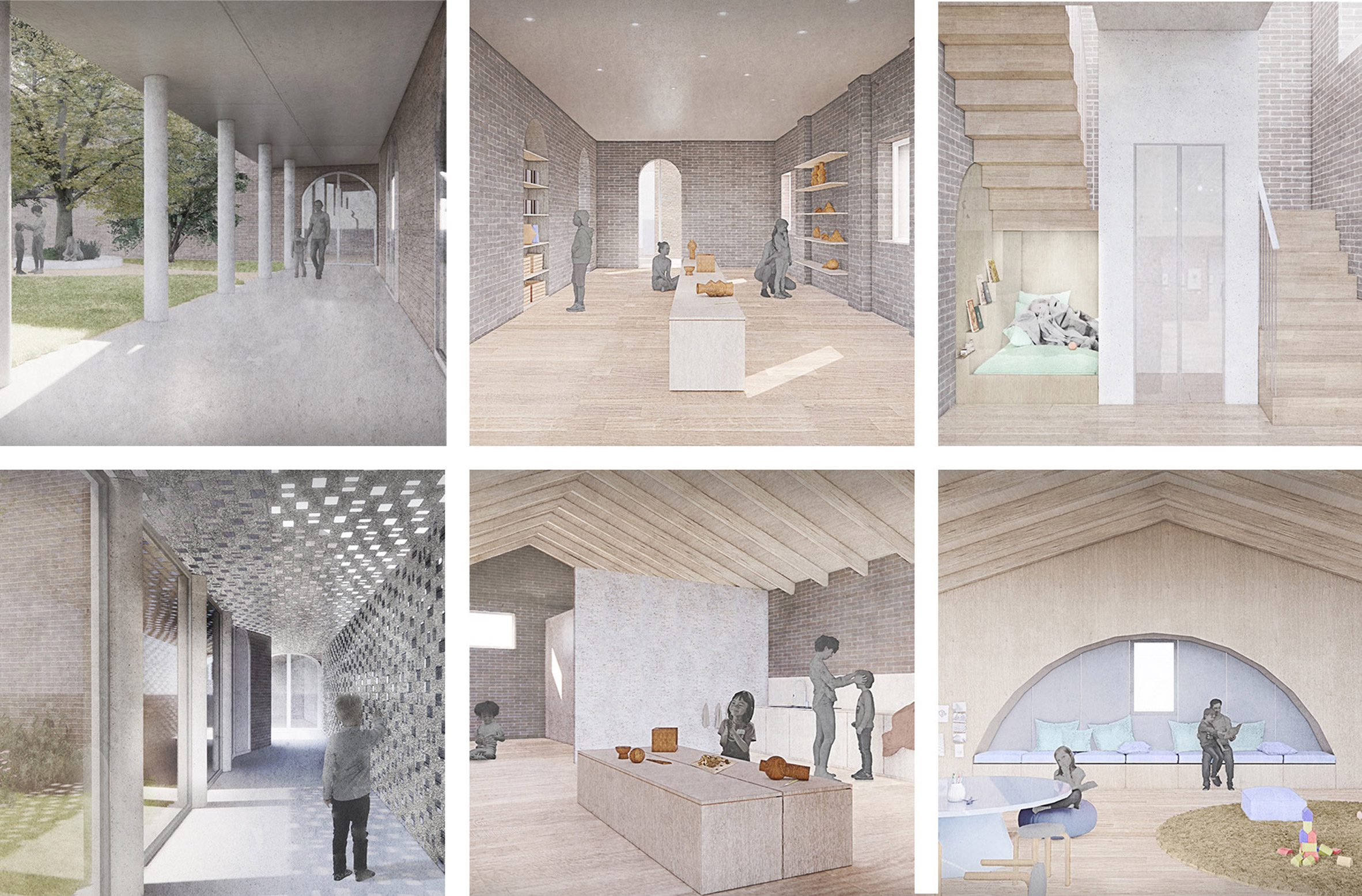 Breaking the Mould: Pottery Workshops for Autistic and Non-verbal Individuals by Hannah Elebert

“Through art-based studio practice and self-generated projects, our interior architecture and design graduating students create sustainable interior spaces, engaging with the adaptive reuse of buildings and structures in response to contemporary social, ethical and political issues.

“Elebert’s project advocates for environmental inclusion through creating an interactive space designed to accommodate the needs of autistic and non-verbal individuals.

“Located in the Former Calcining Works, a Grade II Listed Building in Stoke-on-Trent, the project extends the legacy of the site including learning spaces and pottery workshops for the manipulation of clay.

“Focus is given to the detailing of transition spaces that address the specific accessibility needs of autistic and non-verbal children.” 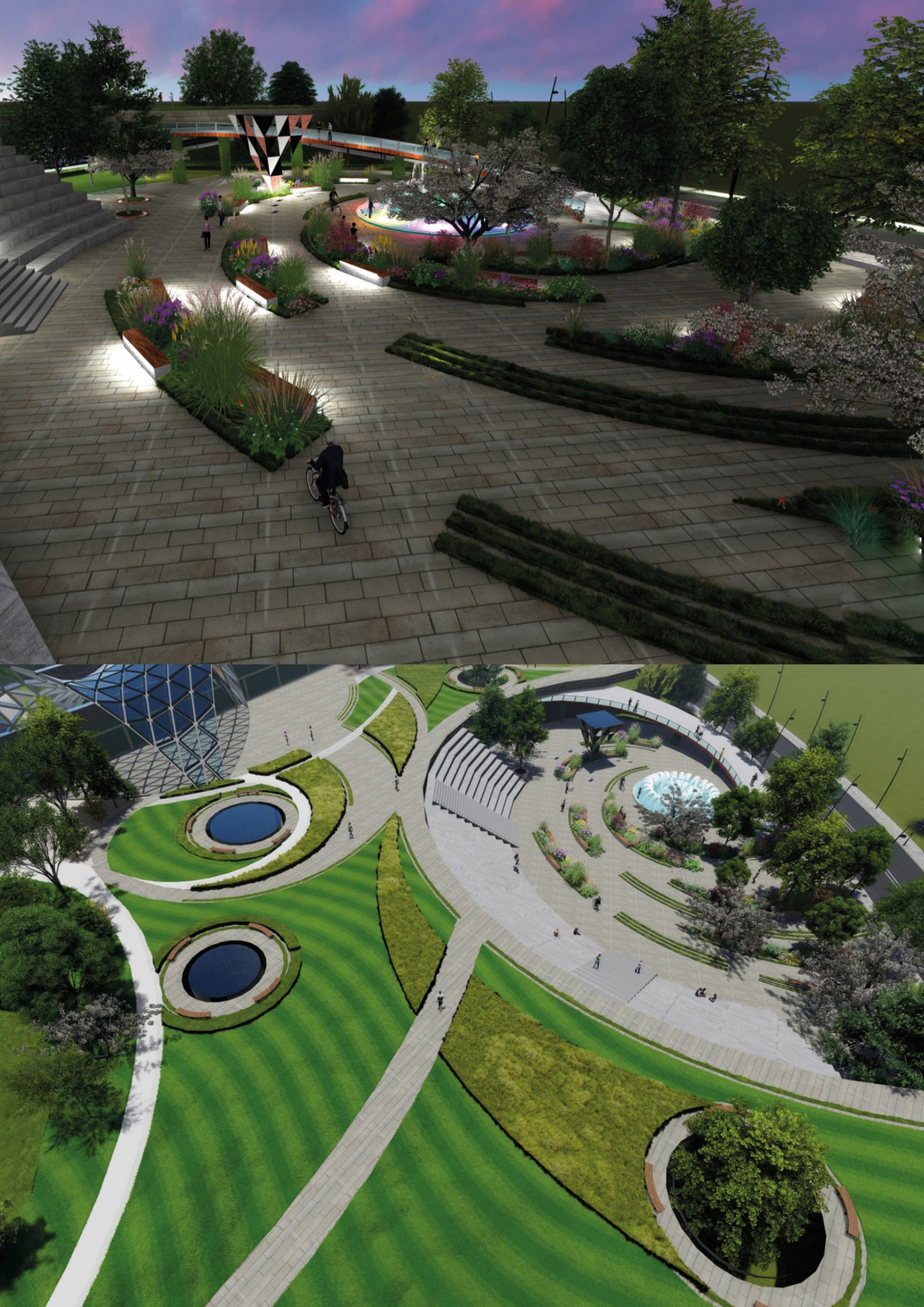 “This studio was designed to create opportunities for students to demonstrate creativity, personal focus and design competence through undertaking a comprehensive landscape architecture challenge in Leeds Innovation District.

“Together with Leeds universities and the teaching hospitals NHS Trust, the city have embarked on creating a focal point for innovation in the city.

“Alongside development opportunities, they are encouraging collaboration between universities, health professionals and civic leaders to enable business and job creation and growth.

“This project is a landscape proposition at the heart of the proposed district, including sculptures built with solar panels and corten steel that will power street lighting and water features.” 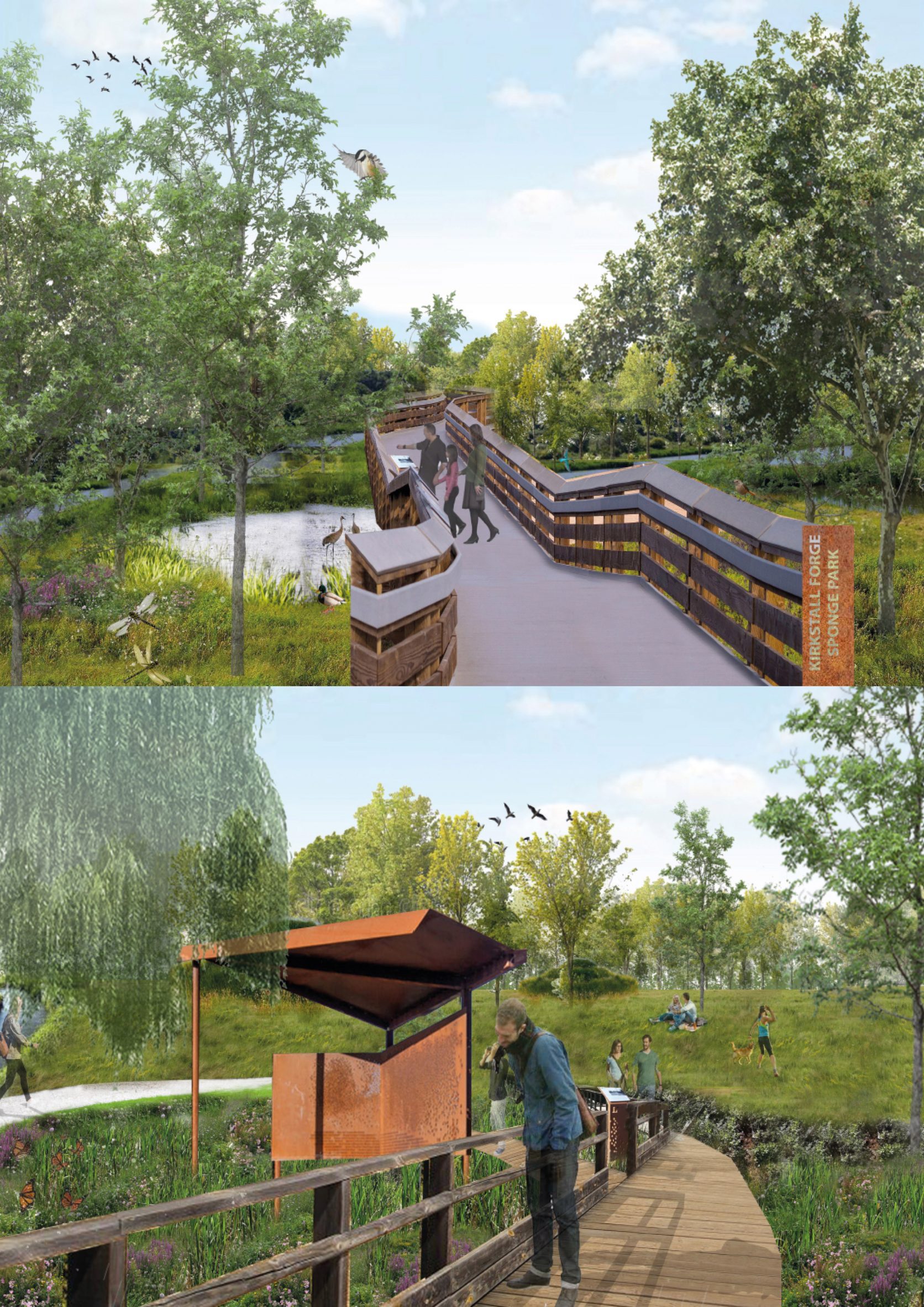 “The design of Kirkstall Forge Sponge Park on the River Aire in Leeds is driven by natural interventions. It creates a resilient landscape that responds to the impacts of flooding and climate change now and in the future.

“The park will support the river by protecting the surrounding settlements and filtering water runoff before it reaches the river; provide wildlife with biodiverse habitats along with clean river water which will promote aquatic life; and bring people together with both flooding and wildlife through natural strategies

“Kirkstall Forge Sponge Park will embrace flooding and proposes natural features that work with increased rainfall and not against it.” 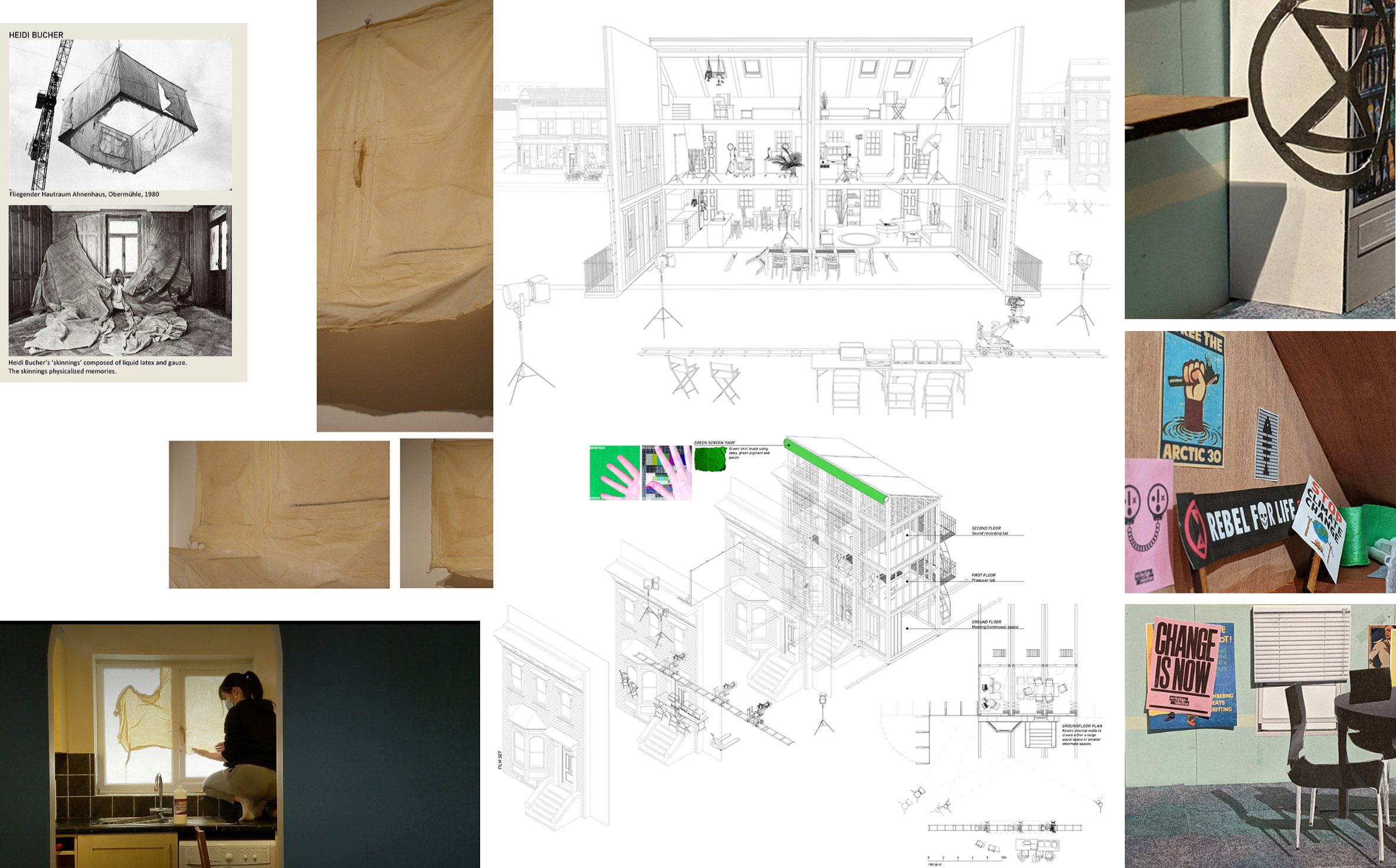 Skeletons, Skins and Parallaxes: Laboratories of Politics and Kinetic Inhabitation by Amy Ferguson

“While the connection of homes and streets in terms of political demonstrations has in recent decade been altered due to the capabilities of instant and mobile documentation, this recent period of COVID-19 lockdown further magnified the desire towards the combination of remote and in-situ political movements – the era of ‘armchair activism.’

“This project aims to recognise the potential of linking a locally immersive and adaptive environment of work and occupancy with globalised political campaigns on worldwide environmental and ecological issues.

“The project probes a series of protest architecture for activists and a hub of ‘politics-as-lived’ for the like-minded to research, campaign and form communities of affinities.

“The adaptability of the architectural, kinetic mechanism activates the protest territories, occupying and transforming spaces within the street, on structures and within buildings.

“Many parts of the architectural, kinetic system can be re-distributed in the protest territory and also move to remote locations yet keeping a synchronic relation with the base labs. The parallax of space across time extends to a parallax of multiple situations and modes of activisms.” 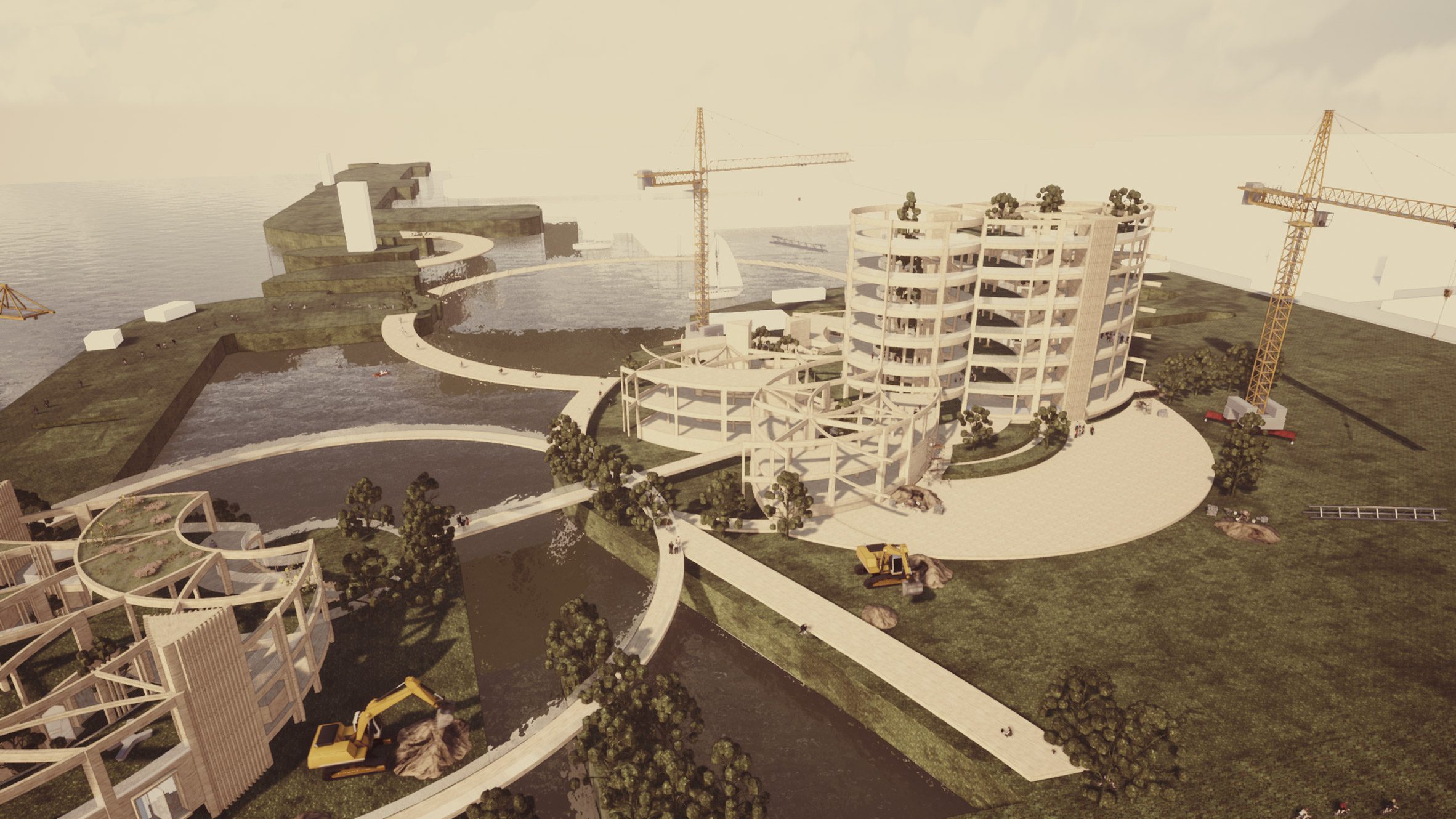 “The ‘Post Pandemic Story Book’ takes the opportunity to reconnect society through participatory design. The project focuses on ‘care’ to explore modes of inhabitation for a multi-generational population, providing user-modified spatial layouts connected by generous garden spaces that allow for escape or chance meeting.

“The Liverpool North Docks site is restructured through a series of engineered timber frameworks which are then populated by a set of conditions and increasingly finer material systems that negotiate from the strategic to human scale. The architectural outcome is driven by user appropriation and demand for open-ended programmes of occupation, offering creative capabilities for an uncertain future.”

This school show is a partnership between Dezeen and Leeds Beckett University. Find out more about Dezeen partnership content here.