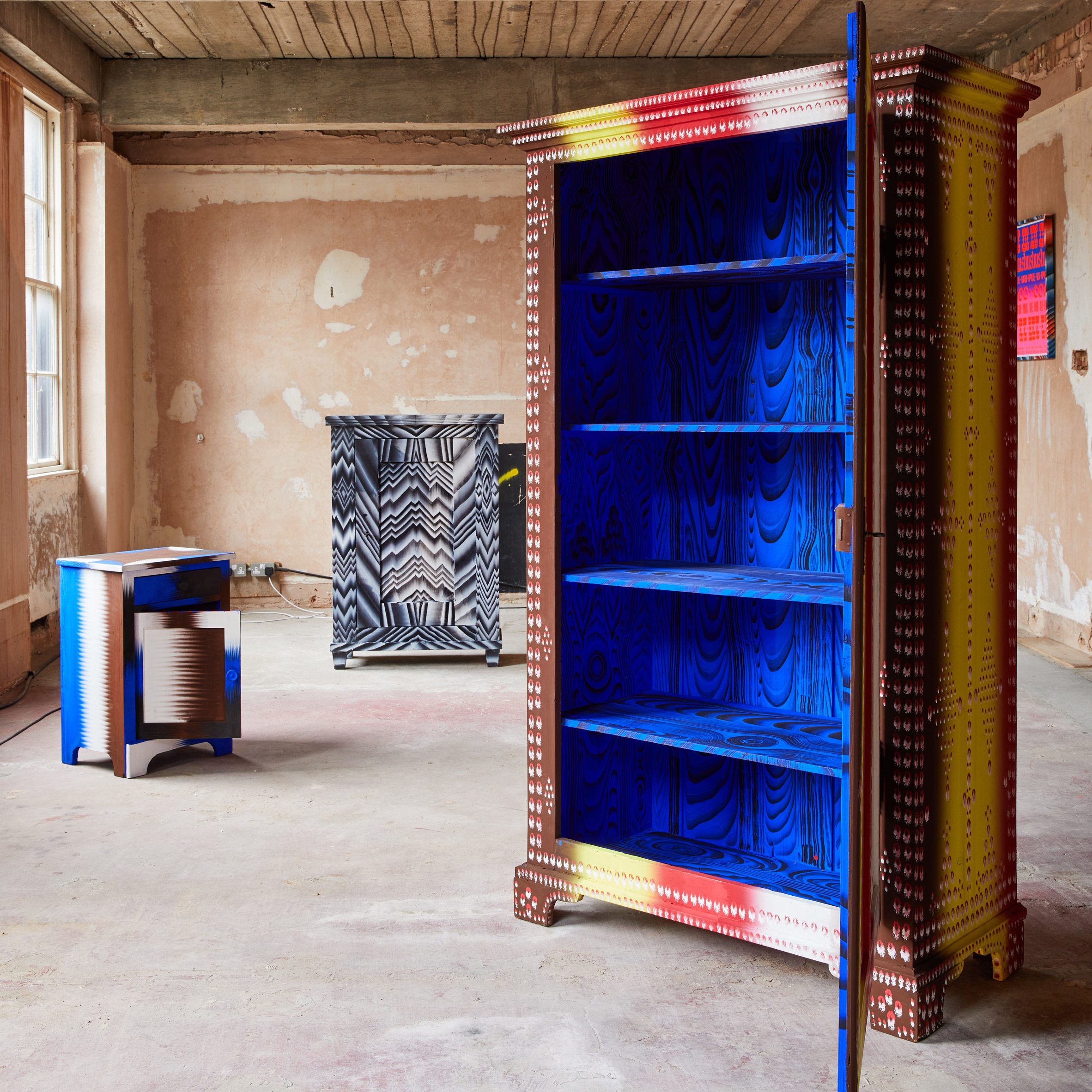 Seven antique pine cabinets have been stripped and painted both inside and out to form this colourful furniture collection, created by Dutch duo FreelingWaters and unveiled as part of London Design Festival.

The exhibition marks the first collaboration between calligrapher Job Wouters and muralist Gijs Frieling under the name FreelingWaters. It is the first project to be commissioned by Wrong Shop Projects, a new platform founded by Sebastian Wrong that brings together artists, designers and artisans to create bespoke pieces.

On show as part of the Design House group exhibition at the 14 Cavendish exhibition space in London, the collection examines the benefits of upcycling and presents 18th and 19th-century pine cabinets transformed by a colourful fusion of graphic design, folk art and calligraphy.

Once seen as redundant and outdated, the pine pieces have been upcycled to be more relevant for today and to make a statement against a culture dominated by mass-produced objects.

“Rather than bringing new objects into an overcrowded culture, FreelingWaters explores the concept of upcycling, applying a thin layer to create a complete visual shift in appearance,” Wrong Shop Projects explained.

The cabinets are finished with traditional casein paint, which is made using milk protein and has been used to colour everything from pop artist Andy Warhol’s iconic Campbell cans to Italian painter Giotti’s bright blue fresco in the Scrovegni chapel.

“The project is very materialistic in terms of the colour, the intensity and the process of where they get the paint,” Wrong told Dezeen.

“They source the pigments from specialist suppliers and then mix them in their studio with a milk product in a medieval technique.”

Frieling and Wouters focused on cabinets in particular because of their “architectural quality and secret surfaces”.

All of these surfaces, even the hidden ones, are painted in bright monochromatic colours and geometric patterns, with the duo’s name and the date of the collection written on each piece as if they were signed and numbered editions.

“Calligraphy is a dying trade and so is folk art,” Wrong explained. “And yet they’re both modernists so they’re playing with these skills to create something that is much more contemporary and relevant for today.”

The collection on display at 14 Cavendish, which will also be exhibited at Design Miami’s first-ever fair in Asia later this year, is one of three that FreelingWaters is creating for Wrong Shop Projects.

“Previously, I’ve focused much more industrialised production and I sell limited-edition prints and posters from designers,” Wrong explained. “So this was a chance to start a new project with new people.”

Wrong is one of the co-founders of British design brand Established & Sons and launched his own limited-edition design platform The Wrong Shop in 2011.

Wrong Shop Projects will continue this legacy by commissioning bespoke collaborations and site-specific installations between artists and designers.

The FreelingWaters collection was exhibited at 14 Cavendish as part of London Design Festival 2021 from 18 to 26 September. See Dezeen Events Guide for an up-to-date list of architecture and design events taking place around the world.