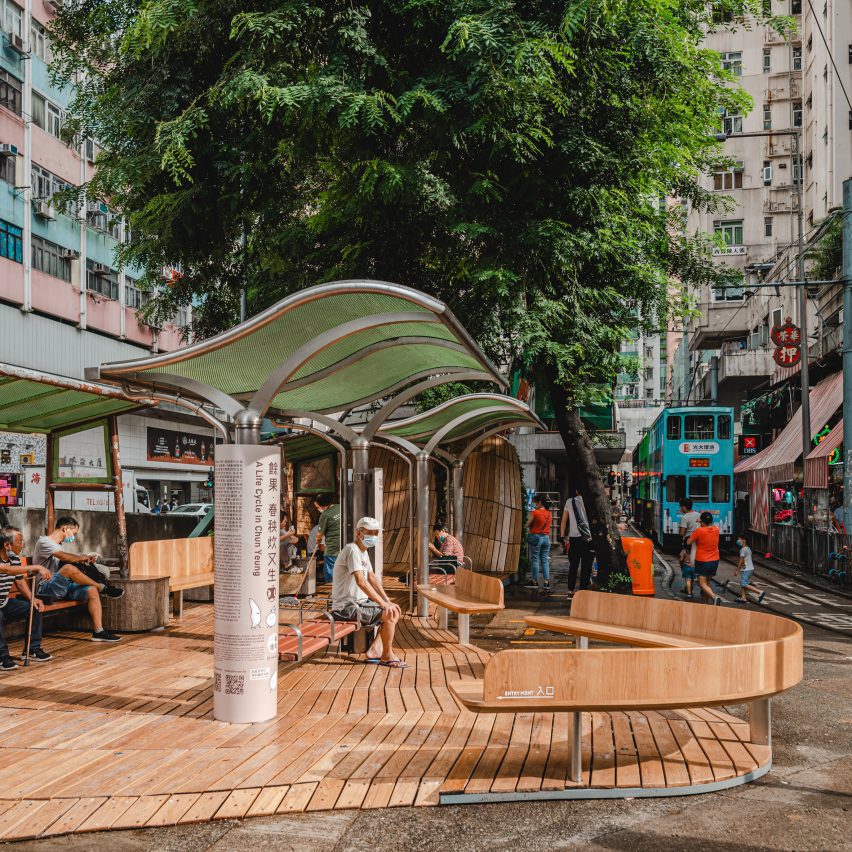 Dezeen promotion: a community garden that transforms produce waste from a street market into fertiliser is among a series of installations created by eight artists and architects for a mixed-use urban area in the Eastern District of Hong Kong.

The installations, which are currently on view, were unveiled on 30 August as part of Via North Point – a festival in the North Point Community – one of Hong Kong island’s oldest neighbourhoods.

“North Point is one of the oldest neighbourhoods on Hong Kong island full of stories of many generations,” said the Hong Kong Arts Centre. “It has remained very local, old, and traditional for many years until recently as the district is rapidly facing gentrification when new, modern private property is being built.”

The festival, spearheaded by Hong Kong Arts Centre and sponsored by the city’s Urban Renewal Fund since 2019, encourages visitors and locals to engage with this lively area of the city.

This year’s showcased installations are the result of a competition that was launched in January 2021 calling upon urban space designers, experts and enthusiasts to reimagine the neighbourhood, which has undergone major redevelopment in the past 20 years.

Of the nearly 80 entries received, six were chosen to be brought from concept to reality. These six selected land-sited works are complemented by two commissioned floating installations.

Scattered from Chun Yeung Street to the sea east of North Point Public Pier, each installation is based upon independent research into North Point neighbourhood, observations of users’ behaviour and lengthy discussions with local residents.

Addressing different aspects of the neighbourhood’s needs and aspirations, many of the concepts advocate for sustainability through biodiversity and up-cycling while others encourage social interaction within the community.

Local architecture firm MLKK Studio responded to the beautiful chaos of the market street by creating A Cycle of Life, a food waste collection point and community garden in Chun Yeung that transforms produce waste into fertiliser and energy to benefit the community.

Also included is the Symphony of North Point by ARTA Architects’ interactive sound exchanging device that amplifies the sounds of North Point while encouraging youth to make music.

AaaM Architects’ Hangout Islands presented a series of plant-filled summer pavilions that are dotted along the North Point pier providing a relaxed beach-style environment for people of all ages to socialise.

Now installed along the public pier, the chairs are accompanied by audio recordings of their former owners’ memories of the area. Passersby can listen to them by scanning a QR code.

Jason Lee Lok-sun presented Sugar Factory, which encourages street fitness along the waterfront with a nod towards sugar refineries of the past.

Also showcased is #TackPoint by #TackTeam, which is a public art installation made from used plastic bottles collected in the area.

In addition to the land installations, two floating installations reflect upon bygone days of swimming in the Victoria harbour while proposing ways towards a greener future.

Re-imagining Collective Swimming in North Point is a floating bamboo structure by multidisciplinary design studio Yucolab that recalls the once-popular swimming decks and huts that used to populate the neighbourhood.

The installations are accompanied by further series of artworks, related tours, workshops and activities that run throughout the month of September.

“Via North Point Festival is the culmination of our vision to engage the community through public art and spatial place-making,” said Hong Kong Arts Centre in a statement.

“It seeks to increase North Point residents’ 15-minute circle of living with art that inspires them to venture further. It encourages the area’s walkability and invites new contemplation of old spaces viewed through a more artistic lens. Through its top-down meets bottom-up approach, it facilitates cultural citizenship as people take ownership and pride in their district.”

For more information about Via, North Point Festival visit its website.

This article was written by Dezeen for Hong Kong Arts Centre as part of a partnership. Find out more about Dezeen partnership content here.