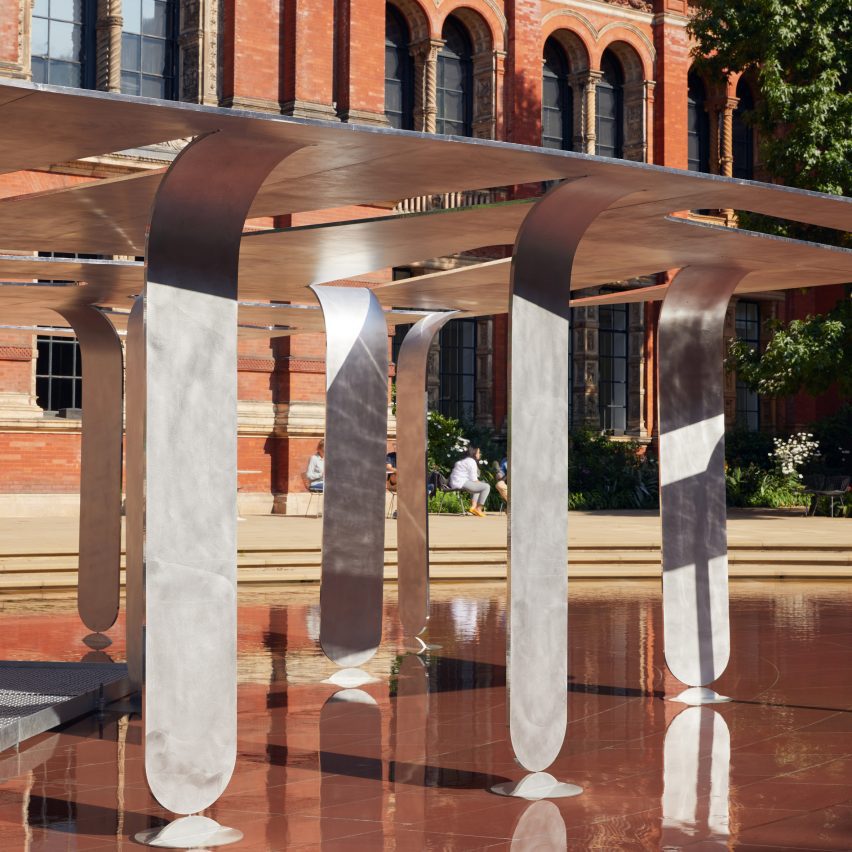 Nebbia Works has created a self-supporting pavilion from simple aluminium sheets at the V&A museum as part of the London Design Festival to highlight the material’s sustainable potential.

Set within the museum’s John Madejski Garden, the installation consists of 27 metal sheets of identical dimensions, each propped up by a single leg carved and bent from its surface.

The structure is fused together to create the impression of being one continuous piece and made entirely from one batch of the metal, which manufacturer En+ claims is the “lowest carbon aluminium the world has ever produced”.

Only 0.01 tonnes of carbon dioxide equivalent (CO2e) was emitted for each tonne of material created, the company says, falling far below the four-tonne threshold that is generally applied to low-carbon aluminium.

Once the festival has come to a close, the pavilion will be melted down into ingot and turned into products, showcasing aluminium’s ability to be infinitely recycled.

To enable this, the structure does not rely on the addition of any other materials to hold itself aloft.

Instead, its algorithmically designed legs combined with the innate strength and lightness of aluminium make the pavilion entirely self-supporting and thus easy to dismantle and repurpose.

“What you see is exactly what you get,” added V&A curator Meneesha Kellay. “There are no layers of material or a facade with lots of things hidden behind it.”

The pavilion’s legs were cut from its aluminium roof panels using a water jet cutter. They were then folded out by attaching them to a gantry crane and rolling them around a huge tube.

No lacquer or finish was applied to the material in order to maintain its recyclability. Rather, the surface was hand-buffed and its edges manually polished, helping to give the aluminium an organic quality.

“Most of the time you associate aluminium with being cold and mechanical, so one of the tasks we set ourselves was trying to make this material a bit more approachable,” Posocco explained.

“The overall finish is not perfect or pristine, there is a kind of human touch to it.”

The aluminium used to create the pavilion is the first batch En+ has ever made using its revised production process.

So far, efforts to create low-carbon aluminium have largely focused on the huge amount of energy that is needed to run the industrial smelters, where aluminium oxide is separated into aluminium and oxygen through a process called electrolysis.

This accounts for around 65 per cent of emissions from aluminium production and can easily be circumvented by running the smelters using hydro or geopower.

But this still leaves so-called process emissions from smelting, which are generated as the carbon anodes used to induce this chemical reaction erode over time, releasing CO2.

En+ has eliminated these emissions by swapping out the carbon anodes for inert anodes made from a ceramic alloy.

“These inert anodes do not erode during the process, so you get pure oxygen out of the top and pure aluminium out of the bottom of the smelter,” James explained.

“For us, the smelting process accounts for 25 per cent of emissions, which we will be saving with inert anodes. So there are virtually no emissions.”

From here, the aim is to create a completely zero-carbon aluminium by 2050, in time for the company to become net-zero as a whole.

To achieve this, En+ is looking at rolling out the inert anode technology across all of its smelters in Siberia, as well as looking at its entire value chain, from the way that its refineries are powered to the mining of bauxite, which accounts for another two per cent of the company’s production emissions.

According to a report by the World Economic Forum, the use of inert anodes combined with hydropower could help to significantly reduce the carbon footprint of the aluminium industry, which currently accounts for two per cent of all global emissions.

“Advances in anode technology could be quickly commercialized and offer wide-scale decarbonization for the industry,” the report concluded.

Another company making use of inert anodes is Elysis, a joint venture between major aluminium producers Rio Tinto and Alcoa, which has already supplied its first batch to Apple and hopes to commercialise its technology in 2024.

“Making industry-wide changes is really fundamental in terms of carbon reduction,” said Madhav Kidao, the other half of Nebbia Works. “And it’s really important as designers that we challenge how we specify things and where they come from.”

Elsewhere, the steel industry is also trying to clean up its act with Swedish producer SSAB producing the first fossil-free batch of the alloy last month.

Photography is by Ed Reeve.