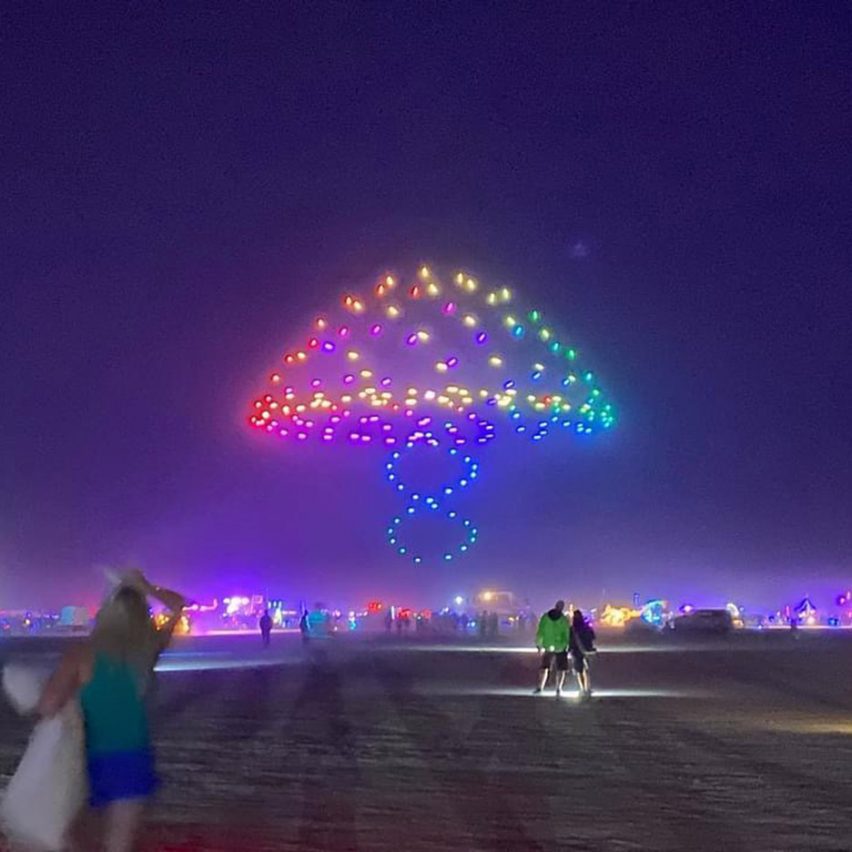 A burning man, a flock of starlings and a mirrored orb designed by architecture studio BIG were created in drone shows by Studio Drift at this year’s unofficial Burning Man festival.

Amsterdam-based Studio Drift presented three drone shows at the Renegade Man festival in Nevada, which took place after the official Burning Man festival was cancelled due to the coronavirus pandemic.

Each show saw hundreds of drones fly above thousands of spectators into formations known to be associated with past iterations of the official Burning Man festival.

“We thought: ‘if no one is allowed to bring art then why not use our drones to create a collection of memories?'” Ralph Nauta and Lucas van Oostrum, the founders of Studio Drift told Dezeen.

To create each installation, the team sketched out ideas on paper and then translated them into the custom software needed for the drones. During the process, the designers also manipulated flight time, speed and light power.

“It’s not every day you get to play with hundreds of drones able to create what you think of,” the pair said. “We are using this technology to create artistic expressions and we want to push the boundaries of what is possible.”

On the first evening of the festival, the studio created a formation that recalled BIG’s Orb – a huge, inflatable mirrored sphere created for Burning Man 2018.

“Friday night we flew a homage to the artworks that have defined Burning Man for the last couple of years,” explained Nauta and Van Oostrum.

While some formations are playful experimental 3D shapes, others such as the swarming Franchise Freedom, are designs that the studio has worked on for years and has presented at other events.

The studio first presented the formation, which sees hundreds of drones mimic a flock of birds at Design Miami.

“Luckily we had some shapes pre-programmed such as Franchise Freedom which has taken years to create and would have been impossible to create on the spot,” said the designers.

“It is a swarm algorithm symbolising the struggle of the individual towards the group,” they said. “A fitting piece in covid time,” they added.

Midway through, the swarm transformed into the shape of a man, in a nod towards the film Metropolis and the need for human interaction.

“The man raising its arms in joy ready to embrace its fellow humans is a symbol of reaching out to embrace one and another,” said Nauta and Van Oostrum. “It’s all about spreading the love we need so much,” they continued.

Afterwards, the entire formation “burned” and crumbled back into the ground, echoing the way in which a burning figure is set alight each year to mark the end of the event.

Previous installations at Burning Man include a circular staircase of stepping stones by artist Benjamin Langholz which allowed revellers to tune out the immersive atmosphere at 2019’s Burning Man.

In 2020, the event took place in a virtual format. Architect John Marx and artist Absinthia Vermut created a digital tour of the pavilion they had designed for the event.