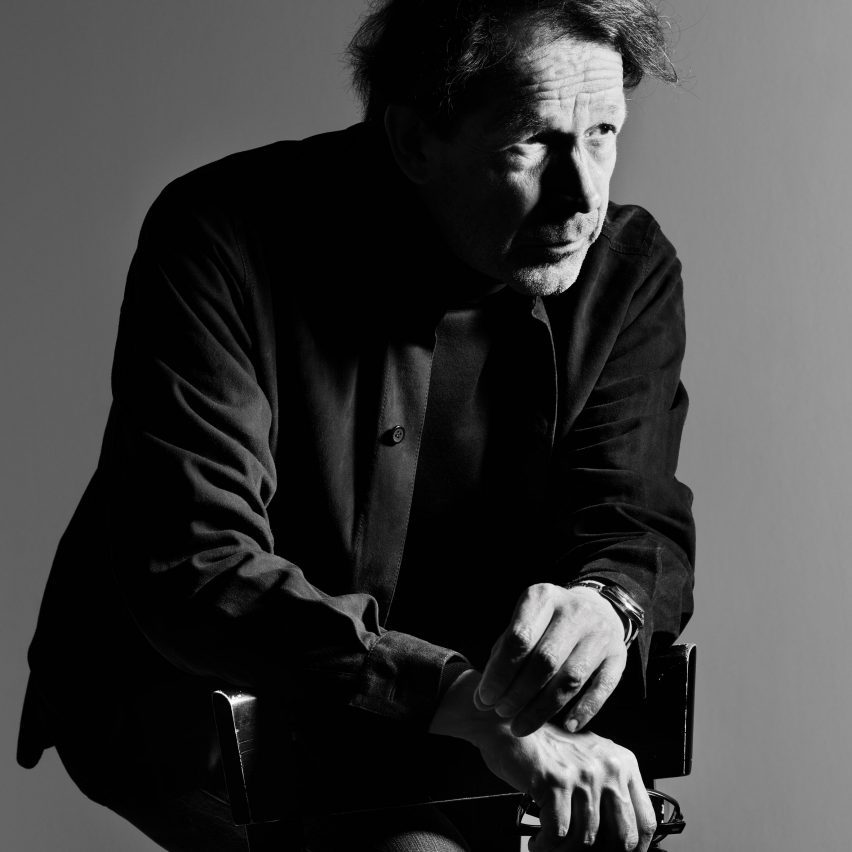 In this live talk produced by Dezeen for Kvadrat, British graphic designer Peter Saville introduced his new Technicolour range of fabrics for the Danish textile brand.

Saville, known as a prolific designer of record sleeves for acts like Joy Division and New Order, spoke to Dezeen’s founder and editor-in-chief Marcus Fairs live from Kvadrat’s flagship showroom in Copenhagen.

The talk coincided with the launch of Technicolour, Saville’s first ever textile collection comprising an upholstery textile, two curtains and three rugs.

The talk was streamed from within an exhibition of the same name installed in the brand’s Copenhagen showroom, which tells the story behind the collection and exhibits its various components.

According to Saville, the collection draws from the bold colours commonly used to mark flocks of sheep and is thematically concerned with the boundary between pastoral and industrial.

“I am excited by how the collection brings the industry of the land, in raw form, into the living environment,” he explained. “The collection elements offer an experience of texture and colour, ranging from the expressionistic to the subliminal.”

Born in Manchester in 1955, Saville studied graphic design at Manchester Polytechnic and made his name as co-founder and art director for Factory Records, where he began designing record sleeves.

He moved to London in 1979, where his design consultancy clients included department store Selfridges, record label EMI and fashion houses such as Jil Sander, John Galliano, Christian Dior, Stella McCartney and Burberry. He has been creative director of the City of Manchester since 2004 and was the winner of the London Design Medal in 2013.

He has previously designed a visual identity for Kvadrat, and collaborated with architect David Adjaye to design the brand’s London showroom,

As vice president of design at Kvadrat, Osther is responsible for the creative arm of the business. In her work with Kvadrat’s collections, she collaborates with a wide range of external designers including Patricia Urquiola, Olafur Eliasson and the Bouroullec brothers.

Osther started working at Kvadrat in 2007 in the brand’s product development team. She holds a masters degree in textile design from Kolding Designskole, Denmark.

Based in Hamburg, Germany, Dekker is design manager of rugs at Kvadrat. She chose to specialise in textiles during her studies at Design Academy Eindhoven and founded her own studio in Rotterdam after graduating.

She has worked with brands including Kinnasand, Gan Rugs and Crafts Council, and has initiated a number of experimental textile projects as a member of the collective Dutch Invertuals.

This is taking place on 16 September in Copenhagen, Denmark, as part of 3 Days of Design. See Dezeen Events Guide for an up-to-date list of architecture and design events taking place around the world.

The post Live talk from Copenhagen with Peter Saville on his rug collection for Kvadrat appeared first on Dezeen.