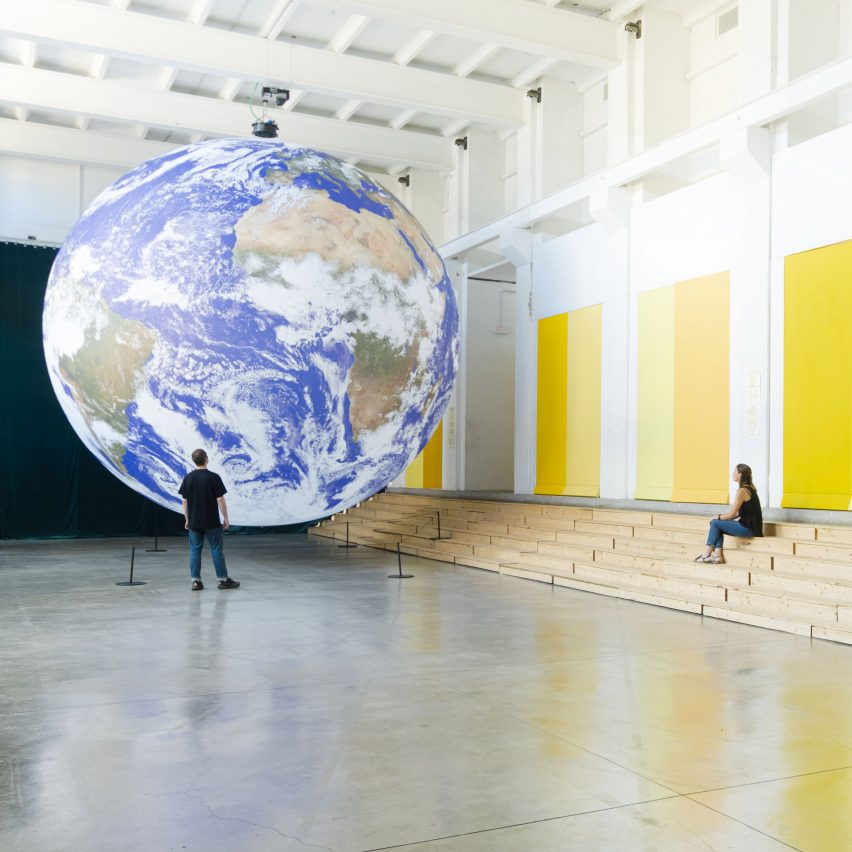 “It’s completely different to the other editions,” designer Luca Nichetto told Dezeen. “It’s totally another rhythm. I prefer it this way because you can actually speak more deeply.”

“There’s not that much going on, so you have the actual possibility to see a lot of things,” agreed Johannes Carlström of Note Design Studio.

The Salone del Mobile furniture fair, which is the lynchpin of the citywide design festival, was pared down this year after being moved from April to September for the first time in more than three decades due to the ongoing coronavirus pandemic.

Although participants reported missing international clients and visitors, attendees said the event’s manageable size gave them more time to engage with both projects and people.

“I think it’s the best year to be here because there are less events and less is better in general,” added Galerie Philia founder Ygaël Attali. “It’s a little bit more authentic than usual.”

Salone del Mobile, the biggest furniture show in the world, was rebranded as “Supersalone” for its September edition and reduced to a fifth of the size, hosting only 464 exhibitors compared to the 2,418 that participated in the event’s last iteration in April 2019.

“Two years ago, at the last Salone, it was such an overkill of presentation and things and people,” said Dutch designer Stefan Scholten. “So I think it’s good that there’s been a level of reconsidering.”

Meanwhile, the independent fuorisalone programme that took place throughout the city alongside the furniture fair hosted a modest roster of 594 events, less than half the size of its 2019 line-up.

Bar Basso, the legendary late-night networking spot, was characteristically busy. But overall, the scale of the design week reminded attendees of the intimacy of the event’s early editions, before it grew into a bloated festival drawing hundreds of thousands of visitors.

“In a way, the event has come back to the beginning,” said Federica Sala, who curated a charity showcase of candle holders designed by the likes of Patricia Urquiola and Marcel Wanders.

“I remember when I came here for the first time in 1999 to exhibit at Salone,” Carlström added. “And this event has more in common with that period than with the previous show.”

Salone’s more compact size has already proven beneficial for lesser-known brands, Sala argued, as they were able to stand out among a smaller field of competitors.

“I’ve been speaking with some little brands and they were happy because they actually made sales,” she said. “It was more complicated before if you had a little booth and you were squeezed in between giants.”

However, due to ongoing travel restrictions, the downsized trade fair was also less diverse than usual. Visitors to the Salone fell dramatically from a record 386,000 people in 2019 to around 60,000.

Only 30 per cent of these people and 16 per cent of exhibitors hailed from countries other than Italy, confirming organisers’ expectations that overseas visitor numbers would be far lower this year.

“We miss our American and Asian clients,” said Scholten, who took Milan design week as an occasion to exhibit his first solo project after disbanding Scholten & Baijings.

“I met a couple of Japanese clients but they said it was really a lot of hassle to come. You can imagine a lot of people skipped it and are waiting until April.”

“Right now, even just coming from the UK to Italy is not easy,” added London-based Bethan Laura Wood, who presented a solo show at Nilufar Gallery.

“It’s a shame because I love the cross-pollination. Even though it’s nice that the fair is small, I still hope for it to be big enough for people from everywhere to enjoy it rather than just being Eurocentric.”

The more local nature of the event was a blessing for some venues. The Triennale Milano museum reported higher visitor figures than in 2019, with 57,000 visitors.

Organisers of the Salone del Mobile said they were pleasantly surprised by the success of the fair, which almost didn’t take place at all following infighting and resistance from key brands earlier this year.

The staging of the fair, together with Milan’s fashion week and the Grand Prix at Monza on Sunday, was seen as a key symbol of Italy’s reopening for business after the traumas of the pandemic.

“It was important to take that first but decisive step, to make our presence felt and send a signal to the country as a whole,” said Porro as the Salone del Mobile announced it will return to its usual April slot next year. Its landmark 60th edition will take place from 5 to 10 April 2022.

But many designers and brands hope there will not be a return to the huge fairs of recent years.

“I asked some of my clients if they’re coming to Milan and they said they prefer to go to Copenhagen,” said Nichetto, referring to the compact 3 Days of Design festival in the Danish capital, which follows on the heels of Milan and last year featured just 167 brands.

“3 Days of Design is small, it’s exactly what Milan was in the 90s,” he said. “So you see people enjoying the city, not stressed to run from one event to another and really enjoying the installations and the projects.”

Stockholm, too, is looking to mimic this small-scale format with its new Stockholm Creative Edition festival, which will be launched at the end of September as a complement to the city’s larger design week in February.

“This is an opportunity to reassess whether we need to do so big, so fast, every year,” said Wood.

“It could give people the courage to say: I will do something really interesting but every two years. And then as long as everybody’s rhythm is set differently, then there may be more space for different people’s work to breathe.”

Milan design week took place from 4 to 10 September in venues across the city, with Salone del Mobile set in the Fiera Milano exhibition centre from 5 September onwards.

Carlotta armchair by Afra and Tobia Scarpa for Cassina