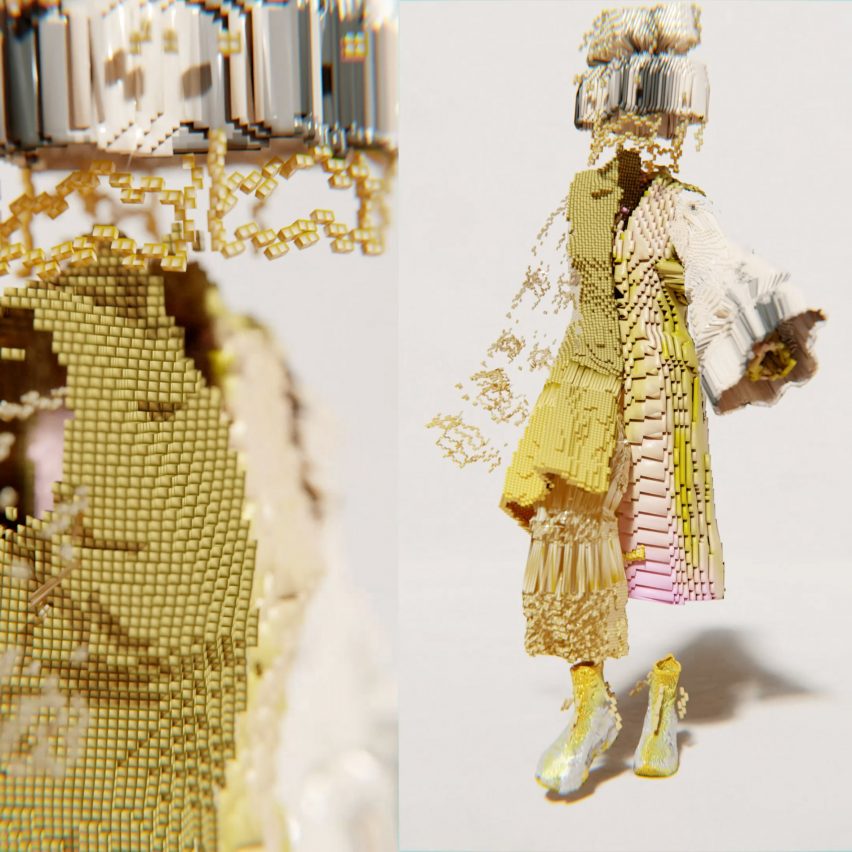 Designer Santa Kupča has created a digital fashion collection of glitching garments through 3D scanning and digitally manipulating her own clothes, which was shown as part of Milan design week.

Titled Decrypted Garments, the collection is comprised of eight highly pixelated looks reminiscent of the clothing found in video games.

The collection was on display at Missed Your Call, Design Academy Eindhoven’s graduate exhibition at Milan design week.

Kupča told Dezeen that the idea for the collection came from her younger self’s fascination with online games and avatar-based communities, such as Habbo and Habia World.

“The theme appeared when I got my first computer at 11 years old and found out about [online] chatrooms like Habbo,” Kupča told Dezeen.

“It was a lot about changing your clothes and making your home. I would dream about owning these virtual dresses and think I must have them in my own wardrobe.”

Blocky and pixellated in their appearance, each look in the Decrypted Garments collection was presented without bodies and animated to look like models walking down a runway.

The garments feature vibrant colours and extruded forms that, when animated, are followed by trailing cubes of pixels while the pieces move.

Kupča created the digital garments through 3D scanning clothes and accessories that she already owned, including shirts, dresses, bags and shoes.

Once scanned, the 3D files were transferred to a modelling software, where Kupča could manipulate and build on the scans to create new silhouettes, colours and patterns.

She explained that creating hyper-realistic digital garments and fabrics was not something she wanted to explore.

Instead, the designer used voxelizing software to create pixelated, Minecraft-like forms that do not try to reflect realistic materials.

“Visually it has connections to Minecraft,” Kupča said of Decrypted Garments. “It’s about glitches and errors, the shapes could become anything.”

“It’s interesting to see how you can recreate fabric from the real world but maybe there’s a different kind of fabric in the digital world.”

“It’s similar with art; centuries ago people would recreate an apple in a painting exactly how an apple looks,” Kupča said.

“The beginning of digital fashion is quite similar, brands are trying to mimic fabric but we could go crazy with it.”

Kupča is a Latvian designer who graduated from Design Academy Eindhoven. In 2020 the designer created pillowy, duvet-style dresses designed to be worn during remote video calls.

Other digital fashion includes a collection by The Fabricant and Toni Maticevski, who created “digi-couture” informed by sea urchins.

Missed Your Call – the Design Academy Eindhoven graduate exhibition took place from 5 to 10 September at Via Vincenzo Monti, 59 as part of Milan design week 2021.

Soriana seating by Afra and Tobia Scarpa for Cassina