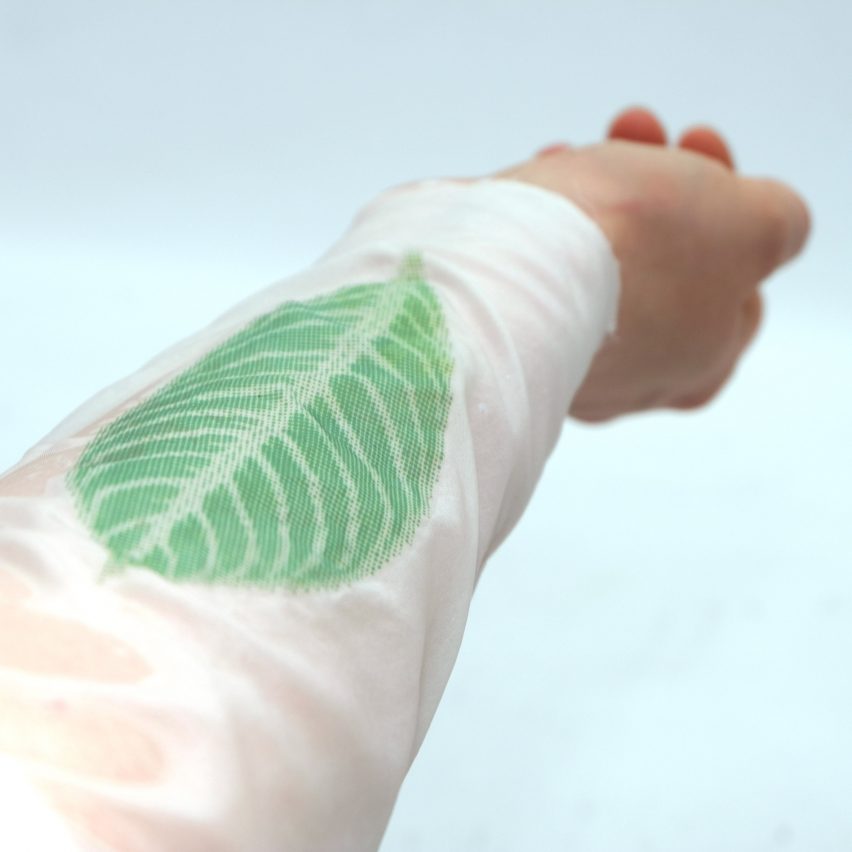 Industrial designer Luis Undritz has created a printer that produces images by projecting light onto algae and is on show as part of the Materialized exhibition at Milan design week.

Defined as “phytoprinting,” the process works by using a white-coloured printer that is fitted with a round-shaped digital light processing laser projector (DLP.)

Undritz designed the printer with a round shape in order to differentiate it from 3D printers, which are generally square in form.

A negative black and white image is digitally fed into the printer, after which it is projected onto the surface of a small piece of material positioned below it. Currently, materials that can be printed on include textiles, ceramics and paper.

Each surface is lined with water, nutrients and a small portion of phytoplankton – a type of microscopic marine algae.

Over a period of three to seven days, organisms begin to grow in the illuminated areas, eventually displaying a fully developed “living” image.

The phytoprinting process is influenced by screen printing, which uses traditional ink and a blocking stencil to create an image.

Undritz‘ phytoprinted experiments include green and dark-red images of cockroaches, shells and leaves, as well as a whimsical depiction of the Bauhaus building.

The project is on show in Milan as part of Materialized, an exhibition at Spazio Gamma in the Isola Design District.

Undritz is exhibiting his work at Materialized alongside other class of 2021 MA Biodesign students at Central Saint Martins art school in London, which he graduated from this year.

“Initially, the idea for the project came from group work where we were testing how algae react to light,” Undritz told Dezeen.

The designer decided to continue experimenting with algae and developed his printer at home using an existing 3D printer. The work took place in early 2020 during the first few months of national lockdown due to the coronavirus pandemic.

“I did everything at home. I didn’t have a scientist around, or a lab to work in,” he said. “So then I thought, okay, this could be something that other people could do at home as well.”

Undritz stressed that phytoprinting has not been developed to entirely replace environmentally hazardous alternatives – such as the use of petroleum-based inks – especially as phytoprinted-fabric is vulnerable to water damage and therefore more of a temporary print.

Rather, the designer said that that he wanted to offer a new and slower printing technique in addition to existing methods. “The images have their own kind of aesthetic,” he explained.

Although currently only operating on a small scale, Undrtiz hopes that the project might eventually develop into something bigger. “I wasn’t able to scale up mostly because of space, but for me, the next step is to try to,” he said.

“My plan is to collaborate with a friend who is a fashion designer. We wouldn’t make a whole collection of clothes at this point, but we want to try and get one outfit out of it – a living garment.”

Luis Undritz is a German industrial designer based in London.

Other recent projects that make use of algae include a clothing range by car brand DC Automobiles that sequesters carbon dioxide and an exhibition at the current Venice Architecture Biennale that explains how algae can be used as both a protein source and an air purifier.

The photography is courtesy of Luis Undritz.

Materialized is taking place from 5 to 10 September at Spazio Gamma as part of Milan design week 2021. See Dezeen Events Guide for an up-to-date list of architecture and design events taking place around the world.