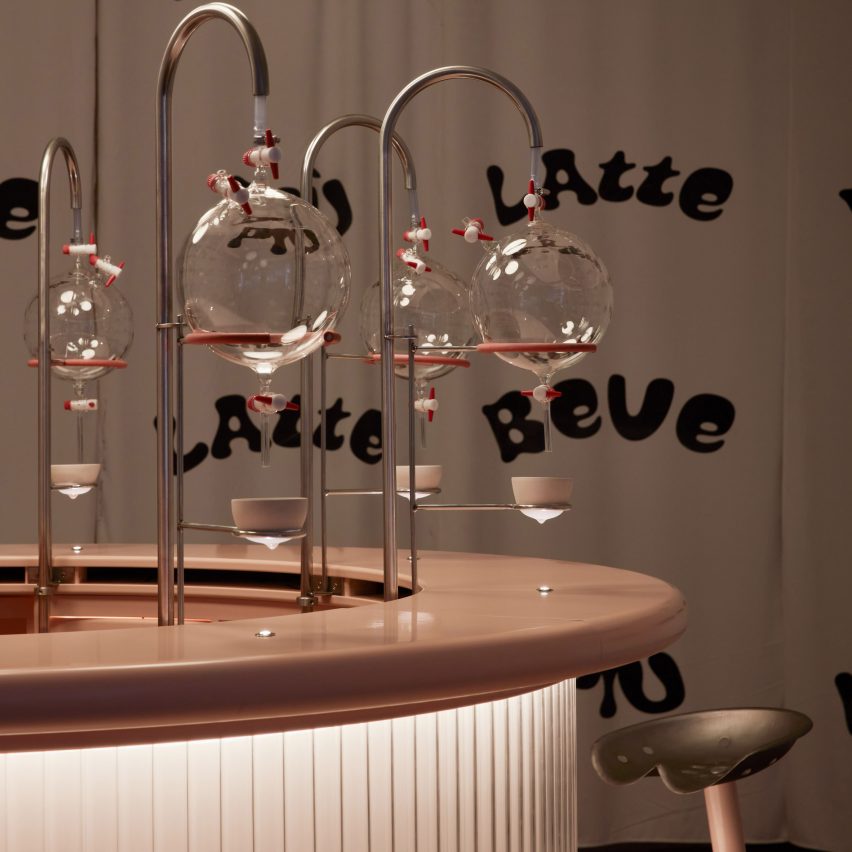 Imagery of breasts and beakers is combined in this fountain, designed by graduates Lolita Gomez and Blanca Algarra Sanchez based on the Korova Milk Bar from A Clockwork Orange and currently on display at Milan design week.

The installation, which forms part of the Alcova exhibition, encompasses a fleshy pink, circular bar that serves guests through udder-like siphons and nippled cups.

By suggesting the curves of the female form, the students from Geneva’s HEAD design school hope to offer a more abstract reinterpretation of the set from Stanley Kubrick’s dystopian film, where men drink drug-laced milk from statues of naked women.

“We decided to do something a little more sensual and organic,” Gomez told Dezeen.

“So we worked with the idea of a fountain and the visual of feeding. It incorporates the female body but in a subtle way, so it’s more about the shape of the breast and the ritual of taking the milk.”

The milk itself is stored in four steel jugs, suspended theatrically in the air above the bar and illuminated by glowing spheres.

From here, it is pumped into spherical beakers and syphoned into hand-turned, ceramic cups, each with a nipple on its underside and illuminated from below by a singular spotlight recessed into the counter.

“We really wanted to design everything down to the glasses,” Gomez said. “All the nipples are unique and have different colours and shapes.”

This sense of femininity is combined with the clinical visual language of factory farming, evident in the industrial steel jugs and the stools topped with metal tractor seats.

Taken together, this is designed to create the impression of milking the fountain but with almond instead of cow’s milk spurting out of the ducts in a comment on the exploitative nature of the dairy industry.

“It’s all about this cow-woman comparison,” Gomez explained.

Originally designed as part of the students’ master’s degree in interior architecture, the project is now on display for the first time after two years of continual coronavirus delays.

It forms part of a larger graduate show from the university, curated by French architect India Mahdavi and centred around the theme of iconic interior spaces throughout history, both real and fictional.

At Milan design week, the installation is housed within the wider Alcova exhibition, which every year takes over different disused buildings across the city.

Elsewhere at the show, Swiss architect Fabien Roy is showcasing a power cut-resilient incubator designed to protect babies in sub-Saharan Africa from hypothermia.

The 2021 Alcova design show is taking place from 4 to 12 September at Via Simone Saint Bon 1 as part of Milan design week 2021.