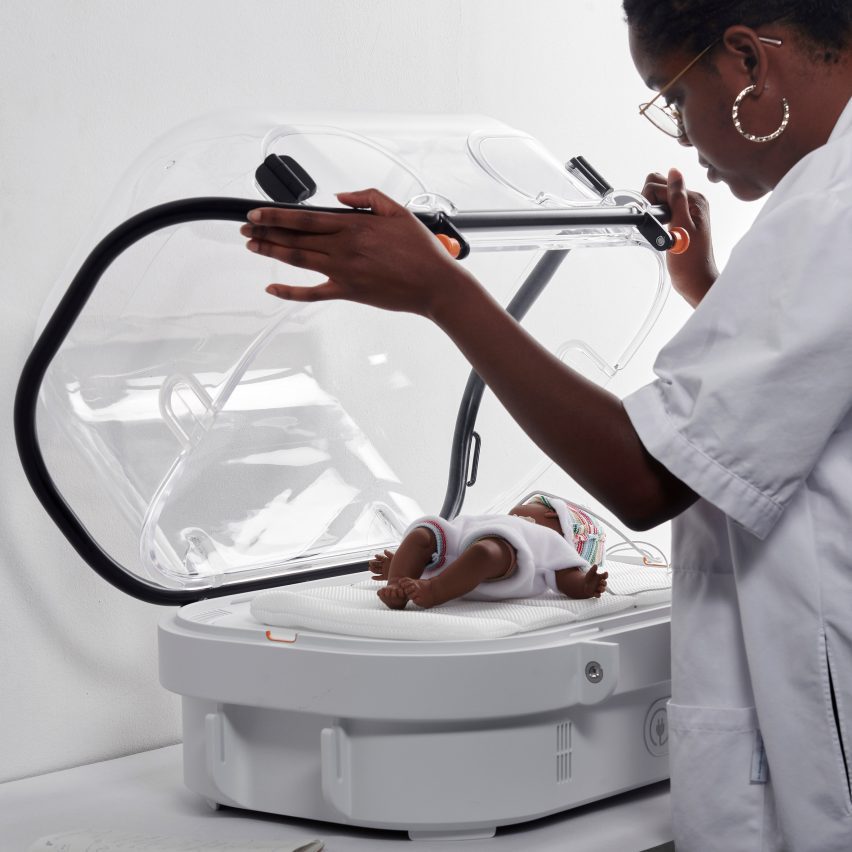 Swiss architect Fabien Roy has designed Robust Nest, an incubator for hospitals in sub-Saharan Africa that functions throughout power cuts and is currently being exhibited as part of Milan design week.

With the small-scale incubator, on display at the Alcova design show until 12 September, Roy hopes to save some of the 1.1 million premature babies lost each year to hypothermia in the region.

According to the designer, the standard incubators aren’t suitable for use in hospitals in countries such as Kenya, where power cuts can be common.

“The main causes are their inability to provide heat during frequent blackouts, the difficulty to transport heavy and bulky devices on dirt roads and their vulnerability to high humidity rates, dust and temperatures,” Roy told Dezeen.

“Blackouts kill a lot of babies. It’s a super sad situation. This incubator is supposed to heat the baby for the entire blackout. The goal is to keep the babies warm.”

Robust Nest, which runs on a thermal battery developed by the Essential Tech Center of the École polytechnique fédérale de Lausanne, can keep babies warm for up to four hours. This will protect babies throughout the majority of blackouts.

When the incubator is plugged in at the hospital, the energy heats pouches of parrafin wax inside the battery, turning the wax into liquid in the process. During a power cut, the paraffin solidifies and releases energy as heat which keeps the baby warm.

Each incubator has a thermal battery that is predicted to last one million cycles of heating and cooling.

To make the medical device less “heavy and bulky”, the designer made Robust Nest smaller than traditional incubators.

This was made possible thanks to the difference in hospital practices around the world.

In the region, it is routine for mothers to warm premature babies through skin-to-skin contact, an effective natural way to reduce the risk of hypothermia.

“The size is based on the local medical protocol in Kenya and sub-Saharan countries,” Roy explained.

“In Kenya, they remove the babies from incubators much earlier than in other countries such as Switzerland,” he explained.

“The maximum size of the babies is 40 centimetres before they are removed from the incubator.”

Another benefit of the reduced size is that it makes construction and modification much easier, something that is particularly useful in hospitals where space is contested.

“They don’t have a lot of space in hospitals and dispensaries,” said Roy. “You can stack the polycarbonate domes of Robust Nest as well as the base and save space.”

“You also reduce the cost of the shipment and then once it has arrived in the country, you facilitate the local logistics because it only needs one person to carry it,” he added.

Alongside solving the powercut issue, Roy envisions that Robust Nest will help prevent deaths that occur as babies are transferred between hospitals and distilleries.

A metal handle around the rim acts as both a handle for healthcare professionals to carry the device as well as a “bumper” in vehicles.

“The concept was to consider the entire lifecycle of the project and not just be using a hospital. We wanted to create something that we can transport babies transfer babies from a dispensary to a higher level hospital if necessary,” he said.

“When you put it in a car, you can attach the seatbelt and it acts as a bumper to transport babies,” he added.

For Roy, this feature is “super important for specialists” as it solves deaths both in and outside of hospitals.

Roy chose a minimalist grey and white colour palette with bright orange signage to highlight sensitive areas such as around locks.

“I made the choice to design something quite conventional in the minimalist design field,” he recalled.

“For the interface, I avoided using text, which is language-dependent, because a percentage of the medical staff cannot read. Instead, I chose to use pictograms.”

Robust Nest will undergo trials in Kenya in early November. It is expected to be ready for use in 2022.

The project recently received the national James Dyson Award for Switzerland, and will now proceed to the international stage of the award. The shortlist for the award, which reward excellence in design and engineering from students around the world, will be announced on 13 October.

Another of this year’s national award-winning designs was Coso, a male contraceptive device designed by Rebecca Weiss that uses ultrasound waves to temporarily halt sperm regeneration.

The 2021 Alcova design show is taking place from 4 to 12 September at Via Simone Saint Bon 1 as part of Milan design week 2021. See Dezeen Events Guide for an up-to-date list of architecture and design events taking place around the world.