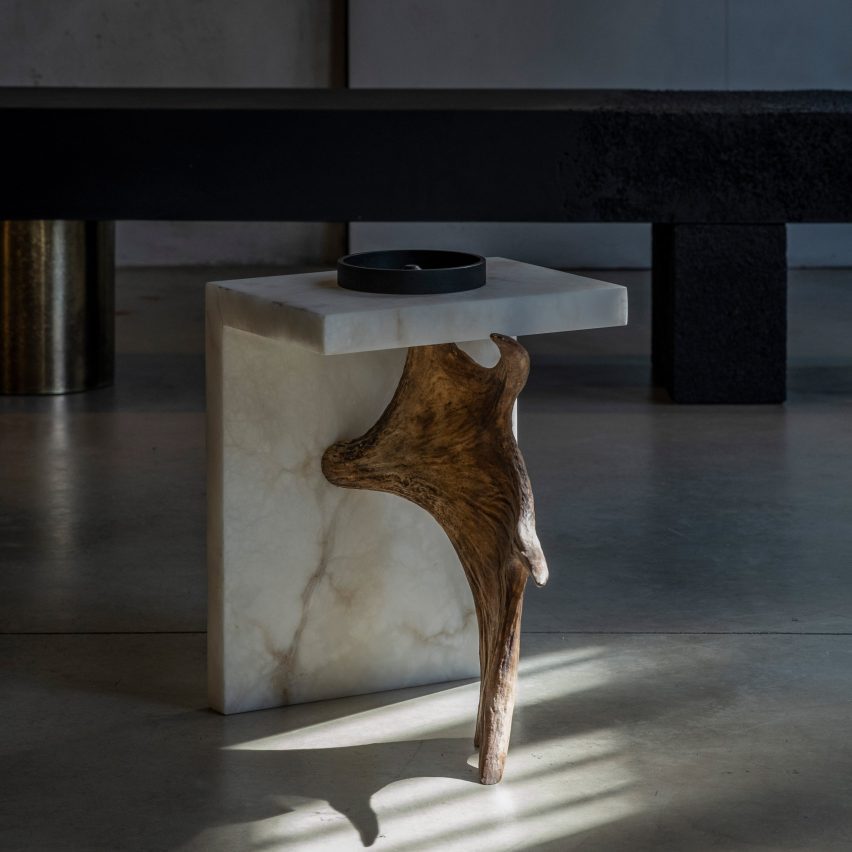 On view at Spazio CB32 near the Fondazione Prada, the show highlights work from eight young designers based in Italy alongside pieces by fashion designer Owens.

The emerging designers’ pieces were created in response to well-known pieces by Owens including an antlered table from his Evolution series and the geometric Alchemy chair.

“When you talk about contemporary designers between 20 and 35 years old, 80 per cent of them were inspired by Rick Owens,” Galerie Philia co-founder Ygaël Attali told Dezeen.

All were contributors were chosen by Attali for their irreverent style, which complements and contrasts with the comparative gravity of Owens’ work.

“The idea is to create this a dialogue between Rick Owens’ heaviness and power, and these airier, softer tonalities that Italian contemporary design can offer,” Attali explained.

“In order to create a dialogue, you need to have two different viewpoints because if they’re too similar, the dialogue is not that interesting.”

In the exhibition, the objects are arranged into small clusters that Attali describes as “scenes”.

Other vases, urns and bowls from his bronze series, many featuring bulbous bodies and triangular feet, are presented on an undulating marble coffee table by Milanese architect Lorenzo Bini as well as on Franceschini’s onyx plinths, their delicate black veining matching the colouring of the homeware.

Another piece by Franceschini, the zoomorphic Urania marble chair, is offset against one of Bottoni‘s dainty glassware designs, a floating vase held upright by a jagged rock placed on its base.

Taken together, Attali argues these pieces serve to emphasise not just the influence of Owens but also the unique qualities of Italian design.

“Galerie Philia also works with designers from the Netherlands, Belgium and Denmark, and when I compare them to Italian design it’s very different,” he explained.

“In Italian design, there is always this playfulness, this softness, this honest, childlike touch.”

Founded in 2015, Galerie Philia is a contemporary design and art gallery with outposts in Geneva, New York and Singapore.

Earlier this year, the gallery hosted an exhibition in Manhattan’s art deco Walker Tower, showcasing more than 70 works by 40 international designers including a chubby pink concrete chair by Studio Noon.

Photography is by Maison Mouton Noir.

Rick Owens – Dialog with Emerging Italian Designers will be on display at Spazio CB32 in Milan until 10 September as part of Milan design week 2021. See Dezeen Events Guide for an up-to-date list of architecture and design events taking place around the world.