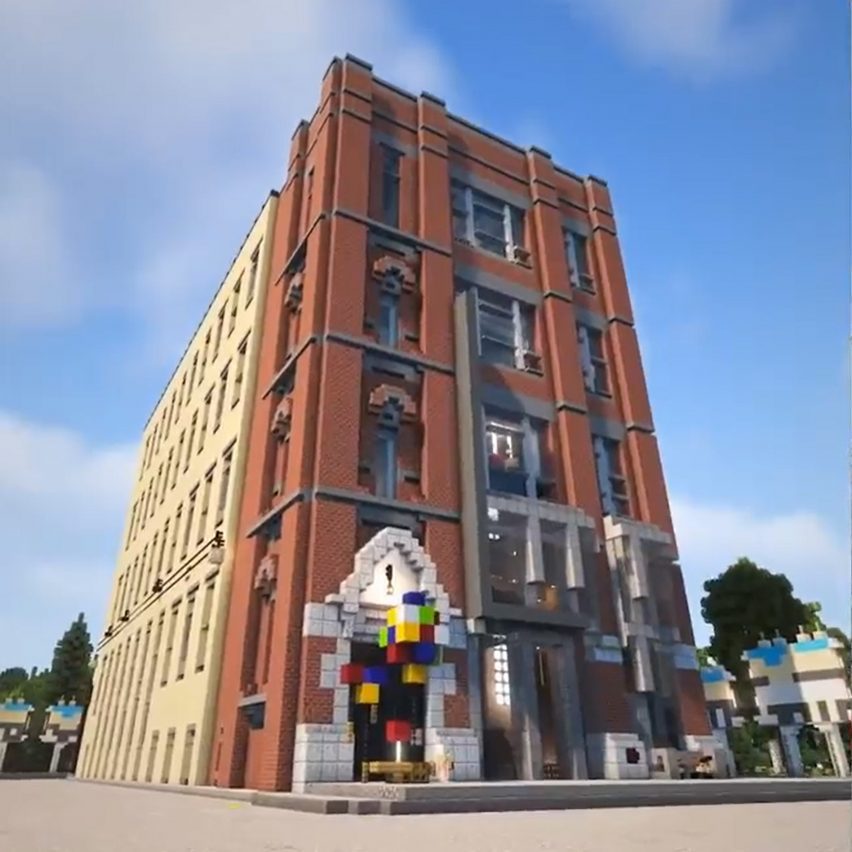 Global communications group WPP is creating a digital campus in computer game Minecraft featuring replicas of its offices around the world, allowing employees to visit other buildings without leaving their desks.

The “Minecraft world” will allow employees to attend events, launch projects and visit more than 19 offices, according to Colin Macgadie of BDG Architecture + Design who is helping to realise WPP’s metaverse.

“WPP is building this Minecraft world of all its campuses next to each other, all at scale and fully realised,” said Macgadie, who is BDG‘s chief creative officer.

“So it doesn’t matter what campus you’re working in globally, you can visit any of the campuses inside Minecraft.”

BDG, which is owned by WPP, has designed a number of the company’s campuses including Sea Containers House in London and an upcoming outpost in Detroit.

Speaking during a live talk broadcast from the new Dezeen Studio Space in London, Macgadie revealed that the practice is now helping to translate these buildings into a parallel virtual world, or metaverse, as part of a dedicated task force that also includes customer experience agency VMLY&R.

WPP’s Minecraft world will feature the London and Detroit buildings, as well as offices in Madrid, Jakarta, Melbourne and other locations laid out “avenue by avenue, street by street”.

“It’s not just a way of exploring the campuses but actually experiencing them in a virtual sense,” Macgadie added.

“It’s early stages but we’re now beginning to give them access to the CAD plans and the information around Sea Containers House and other buildings so you’ll be able to go street by street to different parts of the world.”

The news comes after WPP revealed that only five per cent of its staff in the US and nine per cent of those working in the UK had returned to their offices as of August 2021, emphasising the need for more “flexible, hybrid models of working” post-Covid.

Macgadie revealed details of the Minecraft project during a talk exploring how BDG designs office buildings that adapt to the changing needs of companies and their employees.

Minecraft has already been used by Microsoft to create a virtual version of the company’s new Washington state campus so that employees could familiarise themselves with the space.

But according to Macgadie, WPP hopes to push this idea further by using the platform as a means to improve productivity and build community while in-person interactions remain rare.

“What else can we do with this,” he posited. “How can we launch things in it? How can we run events in it? And how can we use it as more than just a communication tool?”

“It’s going to be exciting to see how they pull it off,” he added.

However, Macgadie also believes it is crucial to reinvigorate physical offices post-pandemic, especially in creative sectors where effective collaboration is key.

“I think technology will make leaps and bounds, there’s no doubt about that,” he said.

“From our own experience of running our studio and having to continue workshops for clients, the online collaborative whiteboards we use have been fantastic but they don’t quite replace that physical collaboration.”

Minecraft is a game that allows users to build their own virtual worlds. Launched in 2011, it now has over 126 million monthly active users.

Other initiatives in the platform include a virtual library created by non-profit organisation Reporters Without Borders that gives gamers access to censored books and articles, while Argentinian designer Andrés Reisinger created ten pieces of virtual furniture that can be integrated into the game.

Leading figures in digital design predict that the digital metaverse that is being built in Minecraft and other gaming and VR environments will eventually merge with the real world.

“The virtual world and the real world will integrate,” said Amber Slooten of virtual fashion studio The Fabricant.

“There will be like a virtual layer on top of the reality that you’ll be able to switch on and off,” she said during a panel talk at Dezeen’s metaverse meet-up earlier this year. “And there will be virtual worlds that you can go into.”

The post WPP building online "Minecraft world" featuring all its global offices in one place appeared first on Dezeen.