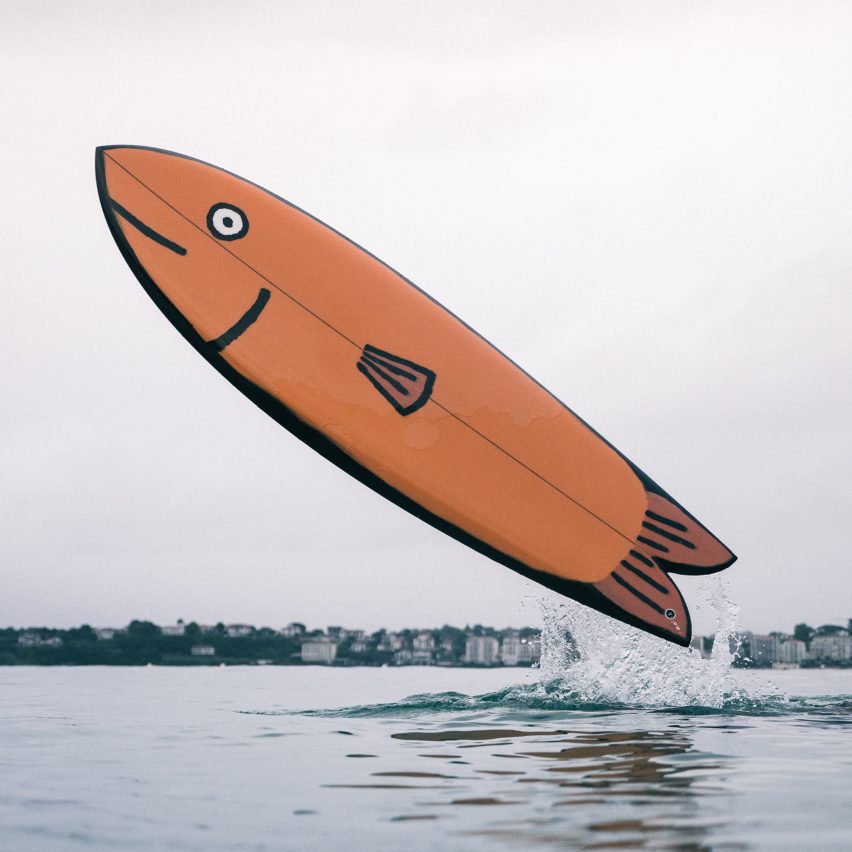 Illustrator Jean Jullien has designed a collection of graphic surfboards hand-painted to look like sea animals, which he describes as objects you could “put on your wall as much as you could surf with”.

One surfboard is painted to look like a blue whale with a curled-up fin, while another depicts a white seal floating on its back.

The smaller two boards are designed as grey and orange fish with googly cartoon black and white eyes – a trademark feature in Jullien’s work. One is a fish surfboard, which refers to a surfboard with a fishtail shape.

“It was a pretty simple shape analysis, which is how I proceed quite a lot of the time,” Jullien told Dezeen.

“I observe something and it triggers an idea, a thought. The context then refines it. The fish surfboard is a pretty explicit name so I started with that as it lent itself perfectly to the exercise, then I toyed around with the other shapes.”

After Sipoir crafted the surfboards, they were hand-painted by Jullien in acrylic paint. The boards were then glassed – cast in a protective shell – by the studio Resin League. Designer Paul Hyde polished the collection to complete the process.

“You can put them on your wall as much as you can surf with them,” said Jullien, describing the work as being a combination of illustrative pieces he designed and functioning surfboards shaped by Sipoir.

Jullien also defined himself as a “keen amateur surfer – but really keen.” He said: “I draw a lot of parallels between surfing and painting, which is maybe why I paint a lot of surf-related scenes.”

“The elements, the wait, the trial and errors, the progression. I started surfing when I started painting. It all coincided with a desire to slow things down a bit.”

Jullien is a Nantes-born illustrator and graphic designer, known for his whimsical cartoon-like play on everyday scenes.

But after terrorist attacks in Paris in 2015, his graphic showing the Eiffel Tower inside the universally recognised peace symbol quickly became a global sign of unity with the city.

The photography is by Julien Binet.