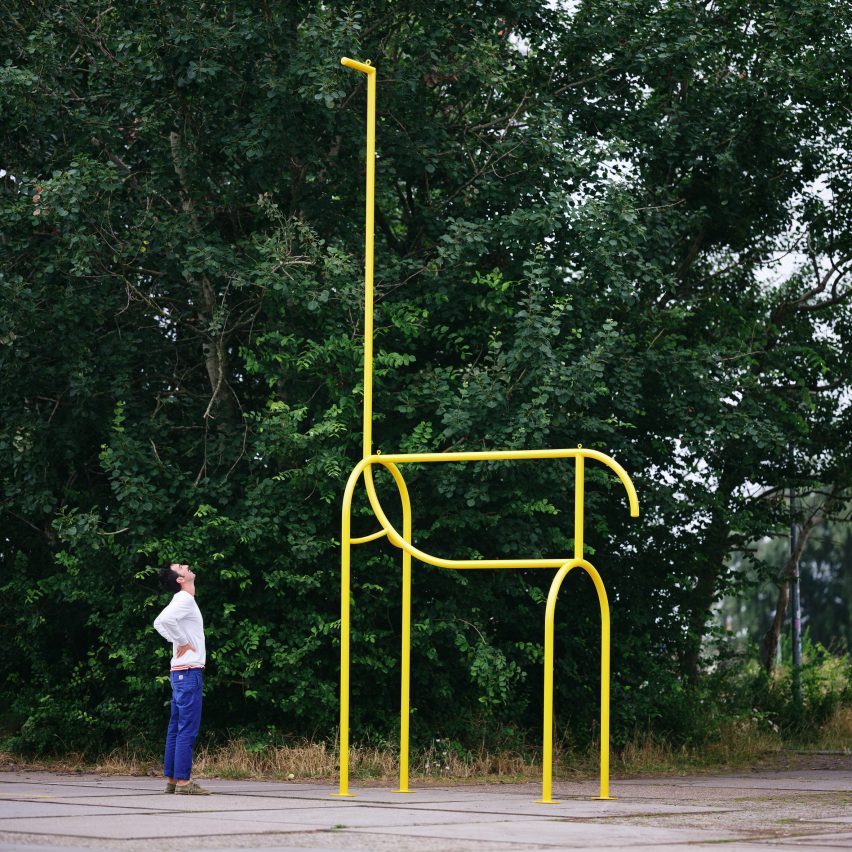 Called Animal Factory, the project includes four sculptures made of metal tubes that are shaped like a giraffe, a crocodile, a gorilla and a wolf.

Each steel sculpture is designed to echo the life-sized proportions of the animal that they represent, and is painted in a single bold colour.

The outdoor playground is located at the city’s NDSM Wharf, a former shipyard on the banks of the River IJ that has developed into one of Amsterdam’s cultural hotspots.

“The idea behind the project was to create a bridge between fantasy and reality, natural and industrial,” Boscardin told Dezeen.

“While from a certain angle the steel constructions do not seem to have specific shapes, when looking from another place the contours of, for example, a gorilla, are clearly visible. In this way, the animals form surprises in the industrial landscape,” continued the designer.

Boscardin’s project is the winner of the NDSM Open Call, an annual competition that invites creatives to submit a proposal for a public art project to be displayed on the wharf.

Animal Factory aims to be a versatile and interactive installation, which can be used not only as climbing frames for children, but also as an alternative place for adults to exercise or store their bikes.

Boscardin’s initial design process began with sketching out a collection of colourful animals in minimal lines, which were then translated into sculptures with the assistance of steel carpenter Iwan Snel.

The toy designer explained that the way children communicate in simple universal signs and their ability to let their imaginations run wild have influenced much of his playful work.

“All children know that a red car is a Ferrari or a stick in your hand is a sword,” said Boscardin, an Italian toy designer and illustrator based in Amsterdam.  “In the same way, a few simple and tall yellow lines are a giraffe, and a green animal with a big mouth is a crocodile.”

Playgrounds are ideal projects for designers to be fun and imaginative. Others that have recently completed include a sky-blue collection of repurposed wave breakers in New York’s Jamestown, and a minimal playground built to encourage tactile exploration in Changzhou, China.

The photography is by Tim Stet.