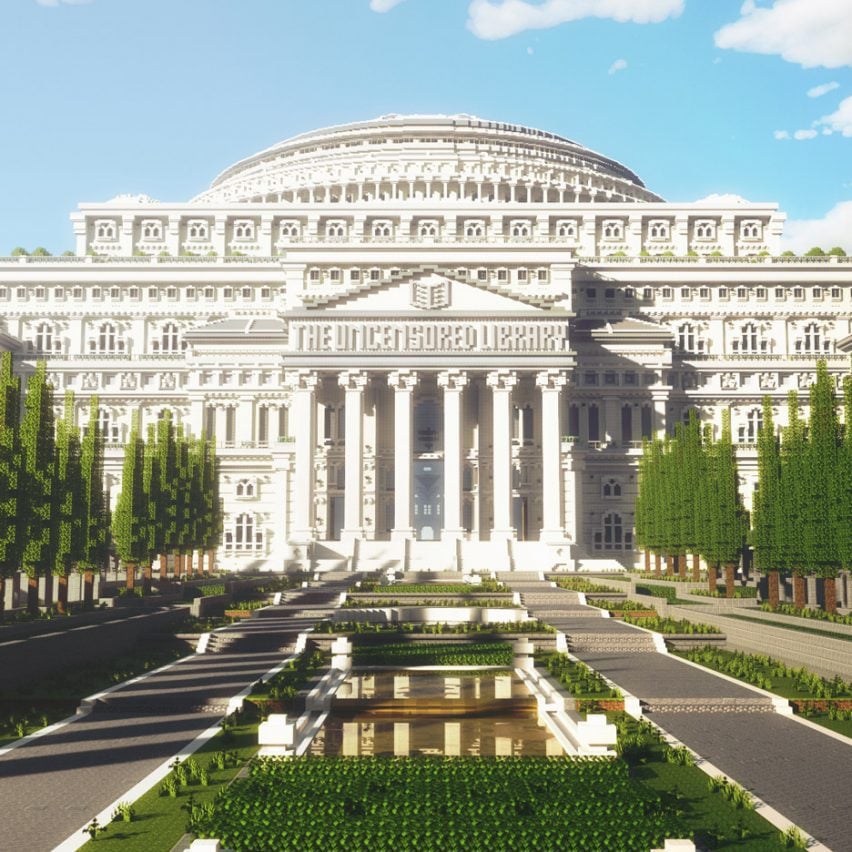 Non-profit organisation Reporters Without Borders has built a virtual library in the video game Minecraft to give gamers access to censored books and articles.

Reporters Without Borders (RSF) and creative advertising agency DDB devised the concept so that young gamers in countries with stringent press censorship rules are able to access the material.

“The target was to reach gamers aged between 15 and 30 years old, especially in countries with online censorship, to get them engaged with independent journalism,” senior art director at DDB Germany Sandro Heierli told Dezeen.

The team chose to locate the virtual library inside Minecraft, using blockchain cloud storage to prevent governments from surveilling its contents.

“The library can be downloaded as an offline map,” Heierli explained. “The offline map is then stored on a decentralised blockchain cloud storage – which is impossible to hack.”

“Once downloaded, each map can be uploaded again, allowing the library to multiply,” he continued. “So far there are more than 200,000 copies – this makes it impossible to take the library down even for Reporters without Borders themselves.”

Although anyone with access to the server can read the 100-page books, Minecraft’s popularity among young people was an important factor in the development of the library.

“In oppressive countries that increasingly restrict the rights of their citizens, young people especially tend to flee into games such as Minecraft that still provide freedom in virtual worlds,” said Heierli.

Users can “playfully interact” with the library’s contents by collecting, sharing and writing their own books in the game. Players can read the books in The Uncensored Library but they cannot change the content of the books on the server.

RSF and DBB selected articles based on carefully developed criteria. They compared countries with a high score in the RSF’s World Press Freedom Index – meaning the country has a low degree of freedom for journalists – against those with high Minecraft usage as outlined in Google data.

The designers then installed a Minecraft plug-in into the game that automatically converts word documents into Minecraft books that can be found in The Uncensored Library.

Additionally, according to Heierli, “RSF is in close contact with the journalists or their families to ensure everyone’s safety”.

RSF and DBB collaborated with design studio BlockWorks to build the library, which is informed by the design of the New York Public Library.

Overall, it took 24 people from 16 countries and 12.5 million “digital Lego blocks” to create the virtual space.

“The design of the library is derived from the traditions of ancient Roman and Greek architecture,” said Heierli.

“The neoclassical architectural style is often used to represent culture and knowledge in the design of public buildings around the world such as museums, galleries and libraries.”

This isn’t the first time the virtual game has been used to give disadvantaged communities a platform.

Minecraft was used by The United Nations to get communities in developing countries to design their own public spaces.

In 2015, architect Bjarke Ingels claimed that the game should be utilised by architects for its world-building principles. The architect used the game as a model for engaging communities with urban design at the Future of Storytelling summit in the same year.

Eight Braun products that demonstrate its good design principles of “simple, useful and built to last”