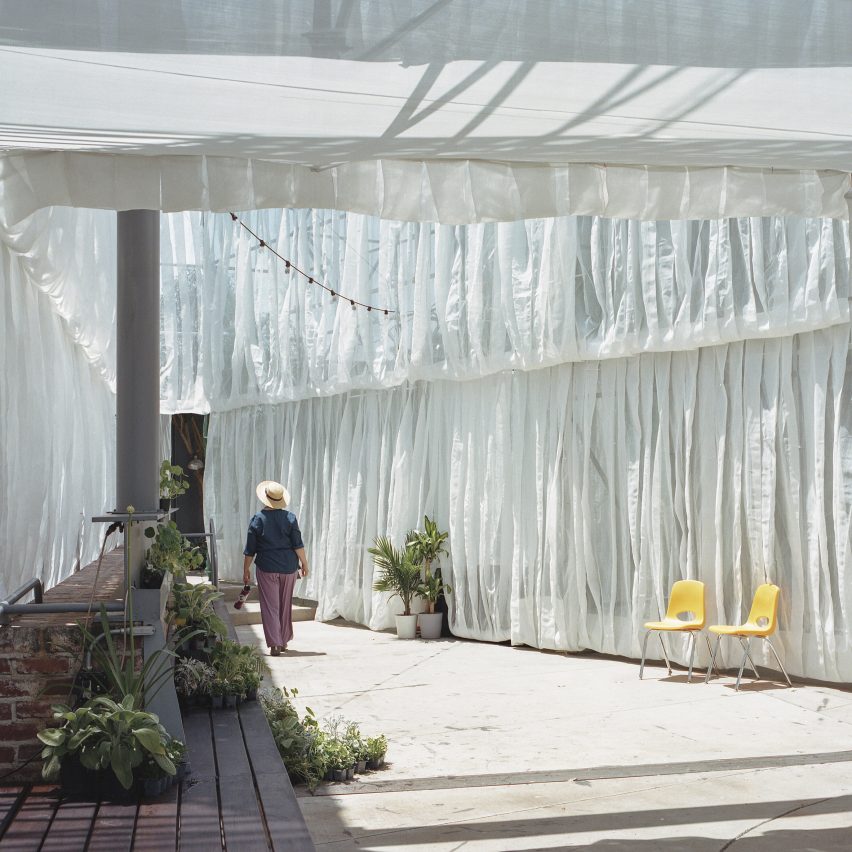 The temporary installation, called Veil Craft, is designed to look just like the many building sites that can be found along Wilshire Boulevard and the surrounding streets.

But unlike a development site, this structure invites members of the public to come inside and discover an “unexpected pocket park” where they can sit down, engage in conversation or watch performances.

Here, the construction tarps have been used to create shade and seclusion, rather than as a barrier to prevent entry.

“Construction textiles are meant to keep people out – this is a construction site, do not enter, you do not belong here, you’re not a part of this,” explained Figure’s San Francisco-based founders, James Leng and Jennifer Ly.

“So there’s a very exclusionary or exclusive type of mentality when it comes to putting up a boundary between the public and something that’s in construction,” they told Dezeen, “and we thought it would be really interesting to invert that.”

They’ve done this by creating a space that is enclosed at the top but open at the base. Green netting forms a blank facade, but instead of extending down to the ground, it folds out to create a canopy.

As you step inside the courtyard, the green is replaced with white. This is pleated to create a veil-like quality, reminiscent of wedding dresses and theatre curtains.

Seating frames the edge of the space, along with string lights and an assortment of potted plants.

Leng and Ly’s intention was to create a space that feels welcoming in a way that a construction site is not, as a way of questioning whether these developments are truly contributing to the quality and liveability of the area.

The pair hope this space will become a place for conversation about the future of LA’s urban landscape.

“When you drive down any major boulevard in LA, you just see scaffolding fabric in green, orange or black,” they said. “It’s an everyday aesthetic of a city that’s always in construction, and no one really thinks about it.”

“Construction is an essential activity because the city is supposedly building much needed housing or infrastructure,” they continued.

“Yet throughout the Covid times we’re seeing an increase of displacement and unemployment, and through that poverty and crime. It makes us question who all of this construction and development is going to benefit ultimately, especially because the processes and aesthetics of construction is all about hiding it away from the public.”

Veil Craft was commissioned by Materials & Applications, a non-profit cultural organisation with a focus on experimental architecture.

The group has been behind many site-specific installations in the city, although this one is the first in a series set to be created in the courtyard of Craft Contemporary, as part of an annual programme.

The installation opened on 17 July and will remain in place until 12 September. It is free to view, and can be found at 5814 Wilshire Boulevard, Los Angeles, CA 90036.