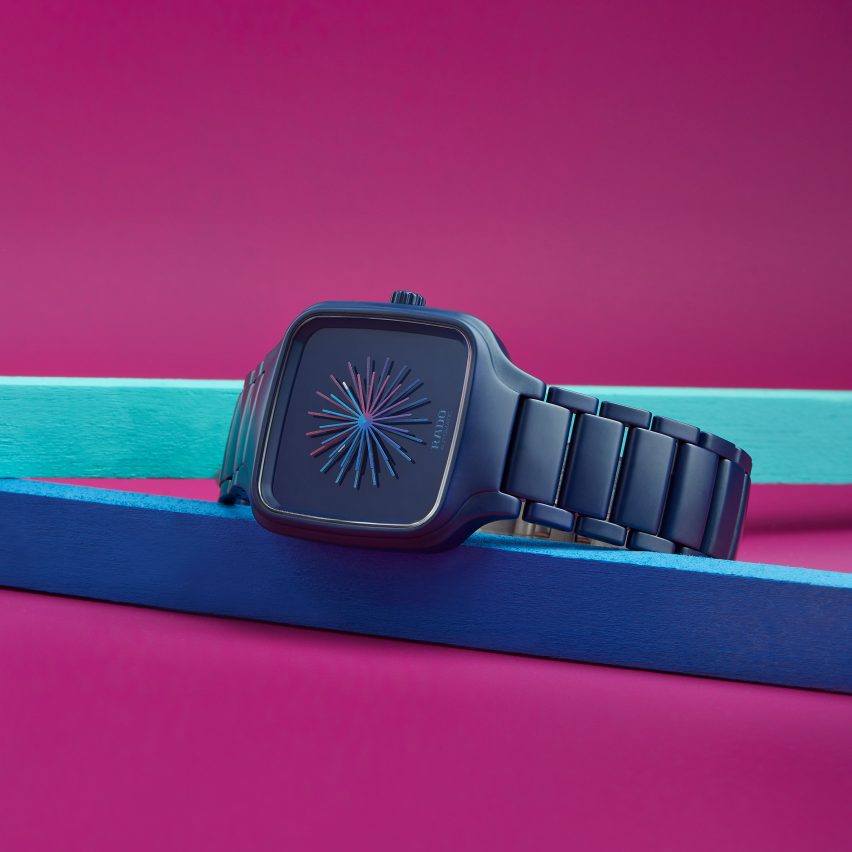 Dezeen promotion: New Delhi artist duo Thukral and Tagra has designed Over the Abyss, a watch for Rado with an “enchanting firework” of multi-coloured hands at its centre.

Created as part of the brand’s True Square Collection, the automatic watch shows the local time superimposed on a range of time zones around the world.

“Our inspiration was to feel connected with a lot more time zones and we wanted to bring something unique to the experience of reading time,” Jiten Thukral said in the video filmed by Dezeen at the artists’ studio in New Delhi.

The timepiece has 18 different hour hands and 19-minute hands that signify different timezones.

Meanwhile, the hands showing the local time are marked out by dots of phosphorescent SuperLuminova paint.

The hands themselves are painted in a gradient of colours ranging from blue to pink, which according to Rado creates the impression of an “enchanting firework in the middle of the dial”.

The watch face is housed inside a square, matt blue ceramic case with rounded corners and a diametre of 38-millimetres.

This offers a modern update to Rado’s distinctive shape developed in the 1970s, which is the distinctive feature of the True Square Collection.

The back of the watch includes a Thukral and Tagra painting, which resembles a pixellated space invader video game.

“On the back of the watch, we are embedding one of the images from our ongoing series of paintings called Dominus Aeries, which explore the boundaries between civilisation and science fiction,” said Thukral.

According to Rado, Over the Abyss reflects Thukral and Tagra’s penchant for socially motivated design, which has previously seen the duo tackle topics from migration to Indian mythology.

“Jiten Thukral and Sumir Tagra’s work focuses on something that is intrinsic to humans but sometimes forgotten in modern societies: the relationship of us individuals to our communities,” the brand explained.

“This is why their work is often described as social design.”

The artist duo previously teased the release of the watch in a live talk streamed on Dezeen as part of Rado Design Week.

Designer Tej Chauhan and Italian studio Formafantasma were among others featured in the event, which took place over a week in November 2020.

This article was written by Dezeen for Rado as part of a partnership. Find out more about Dezeen partnership content here.