Ten colourful basketball courts from around the world 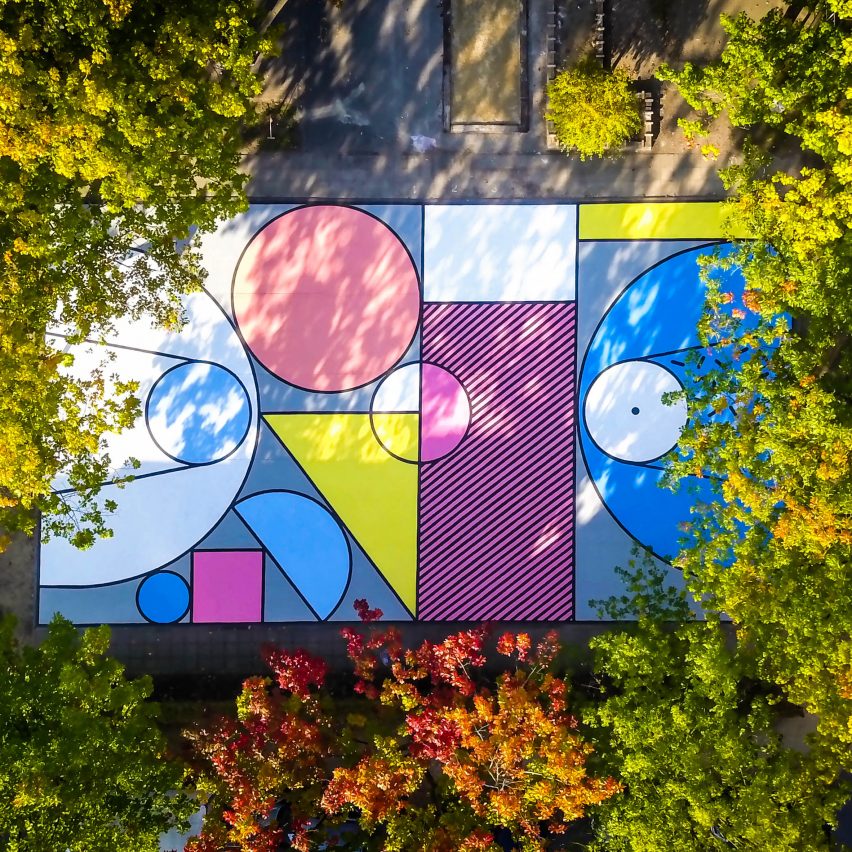 A blue chequered court in Mexico City, a multicoloured court in Paris and a 3D-printed basketball floor all feature in our roundup of colourful basketball courts. 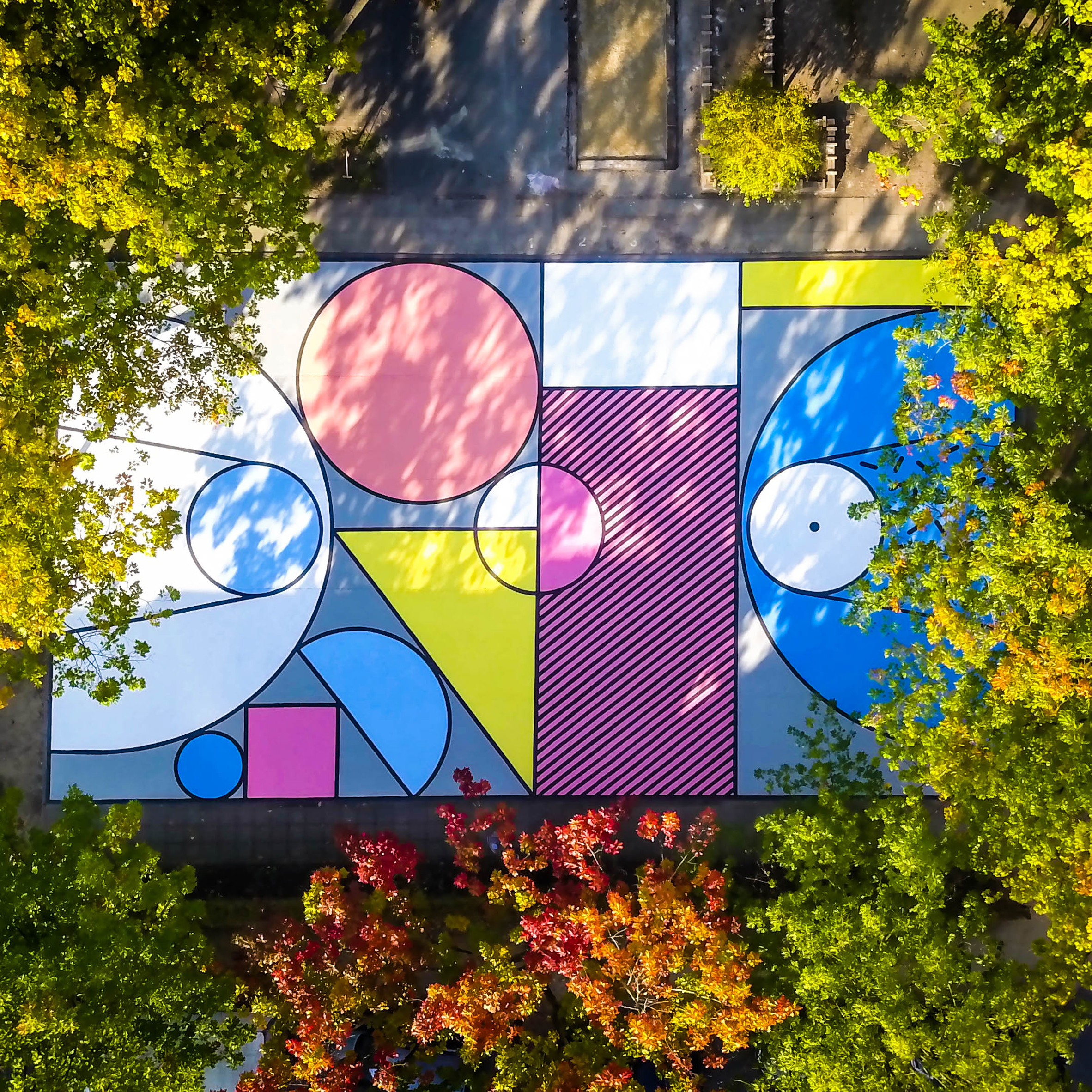 Belgian artist Katrien Vanderlinden painted a colourful mural informed by a children’s game onto a basketball court in inner-city Aalst.

Squares, rectangles, triangles and circles, in different shapes, sizes and colours make up the court named Ezelsplein. Vanderlinden used the children’s mathematical reasoning game Logical Blocks as the basis for her geometric designs.

The unique pattern of shapes, lines and colours give players the opportunity to make up their own games on the court.

Find out more about Ezelsplein› 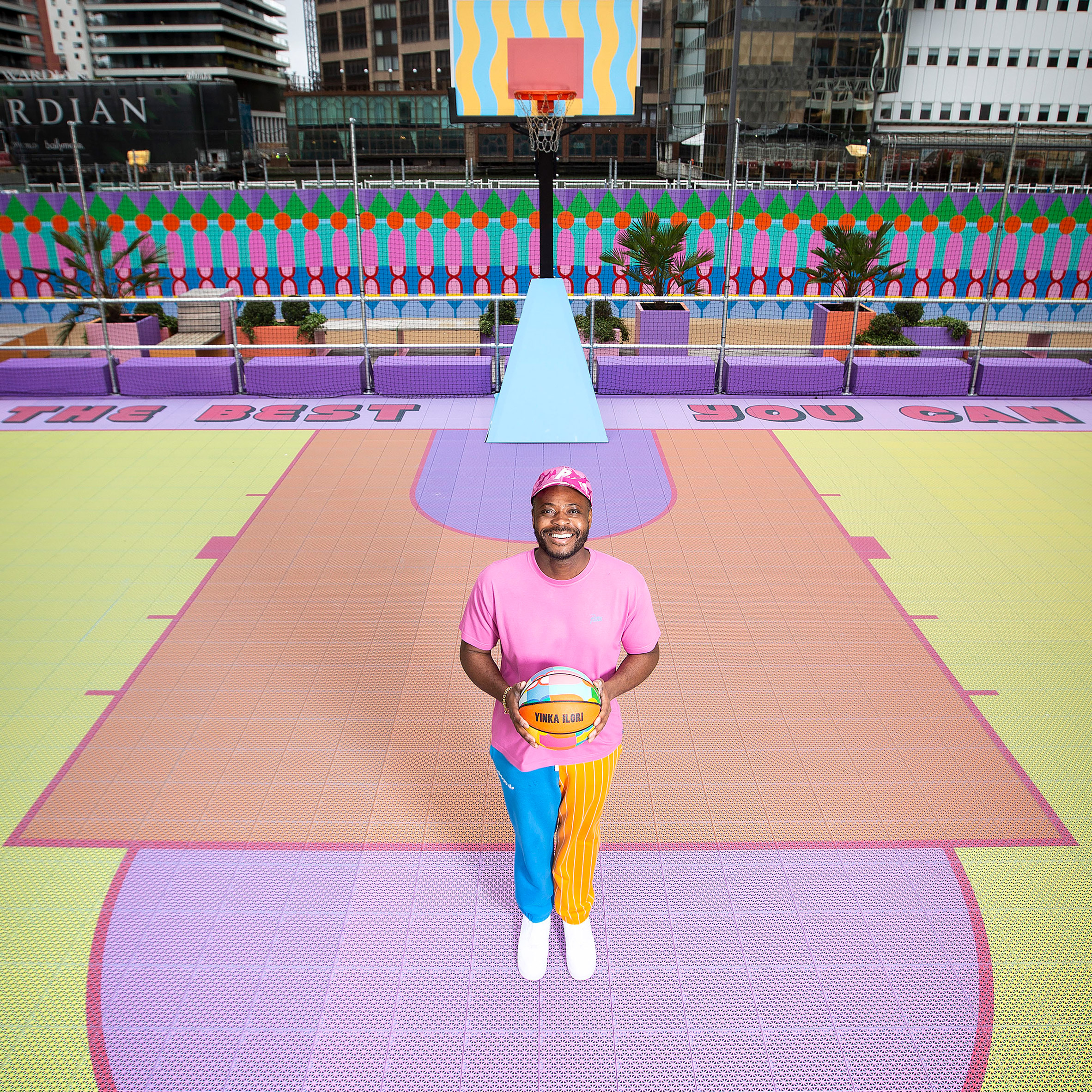 The half-sized court, which is designed for three-a-side basketball, is covered in 3D-printed polypropylene tiles.

Ilori’s colourful prints also spill out onto a wall of hoarding that runs along the perimeter of the court, while a pattern of blue and orange waves laps the backboard of the court’s sole basketball hoop.

Find out more about the Bank Street Park basketball court› 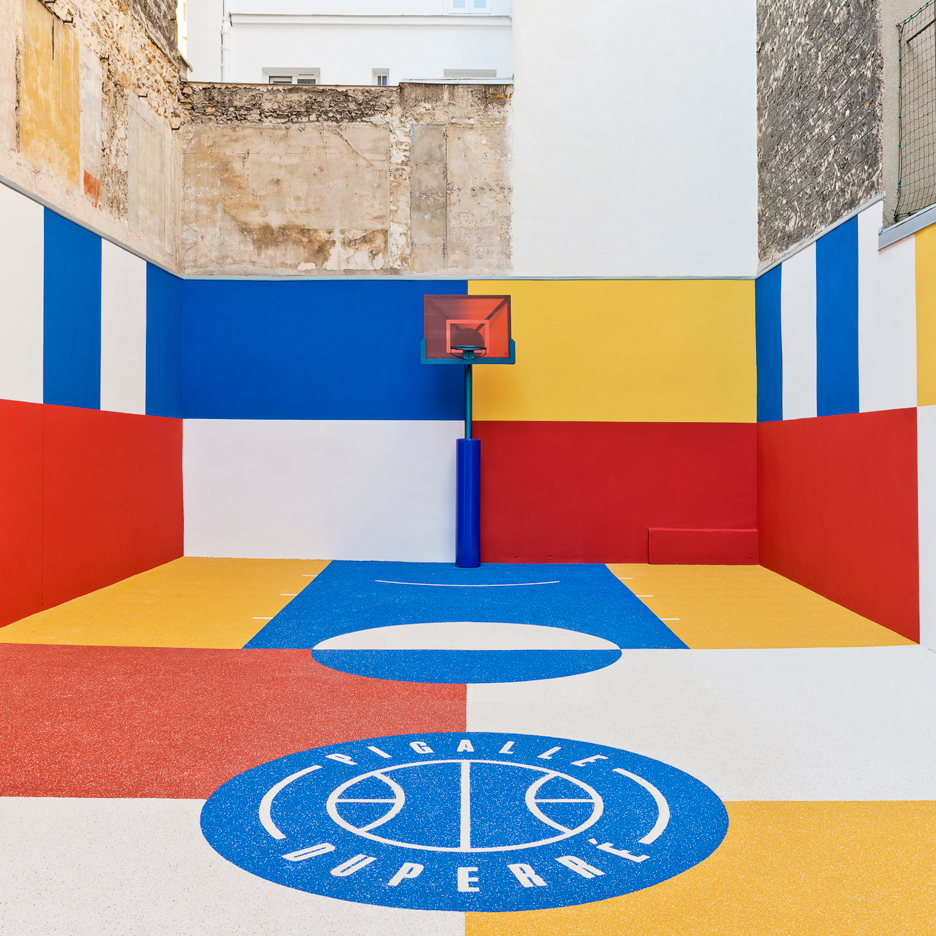 Pigalle Duperré in Paris by Ill-Studio and Pigalle

Ill-Studio partnered with French fashion brand Pigalle to create a multicoloured basketball court nestled among a row of buildings in the ninth arrondissement of Paris.

Squares of blue, white, red and yellow ethylene propylene diene monome (EPDM) rubber – a synthetic material commonly used on floors for sports – have been added to the court.

Find out more about Pigalle› 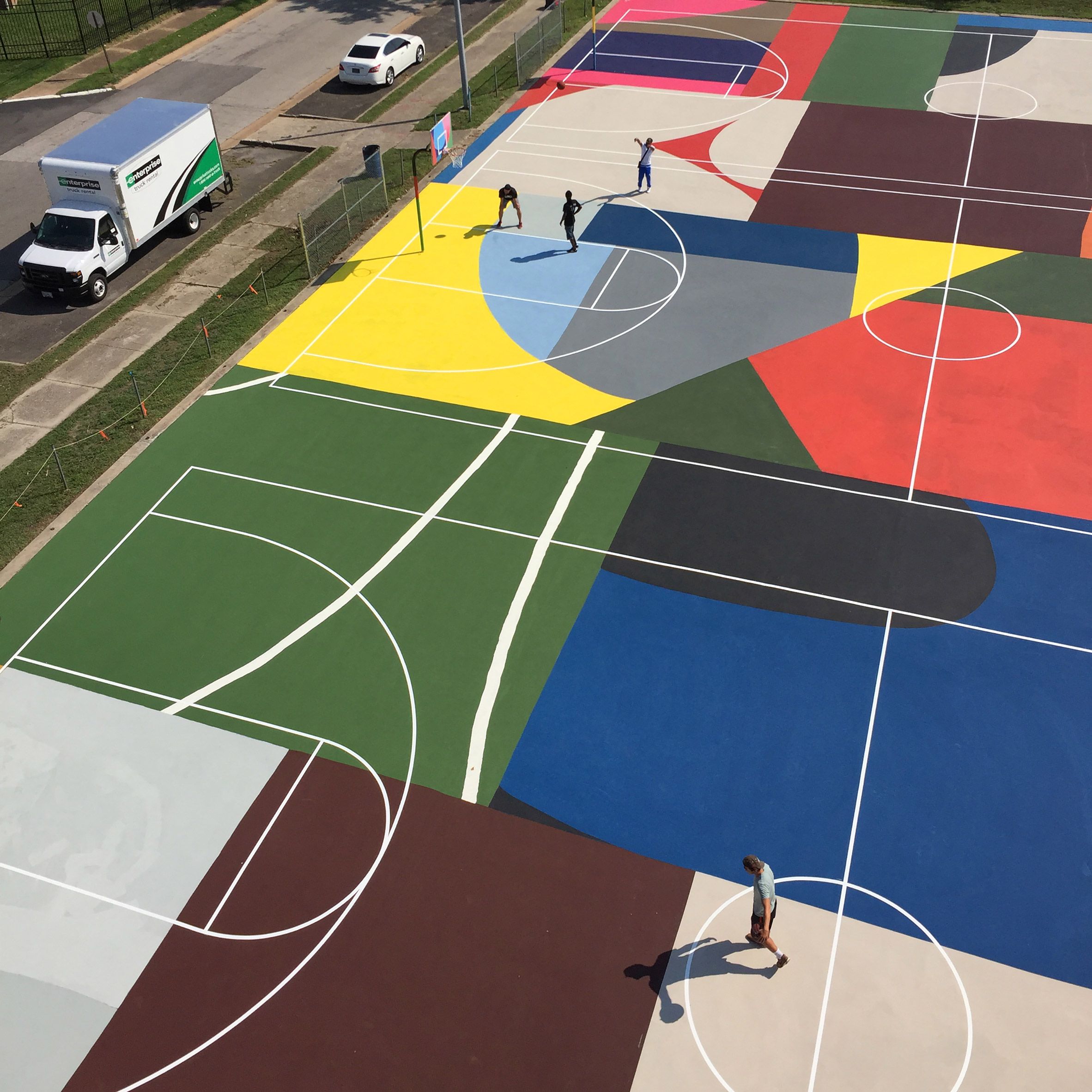 The designs are based on a series of five oil paintings, which when placed side by side form one larger image in a “tapestry of colour fields”.

White lines were painted over the top of the coloured background, which includes hues of blue, green, red, yellow, brown and grey.

Find out more about the Kinloch Park courts› 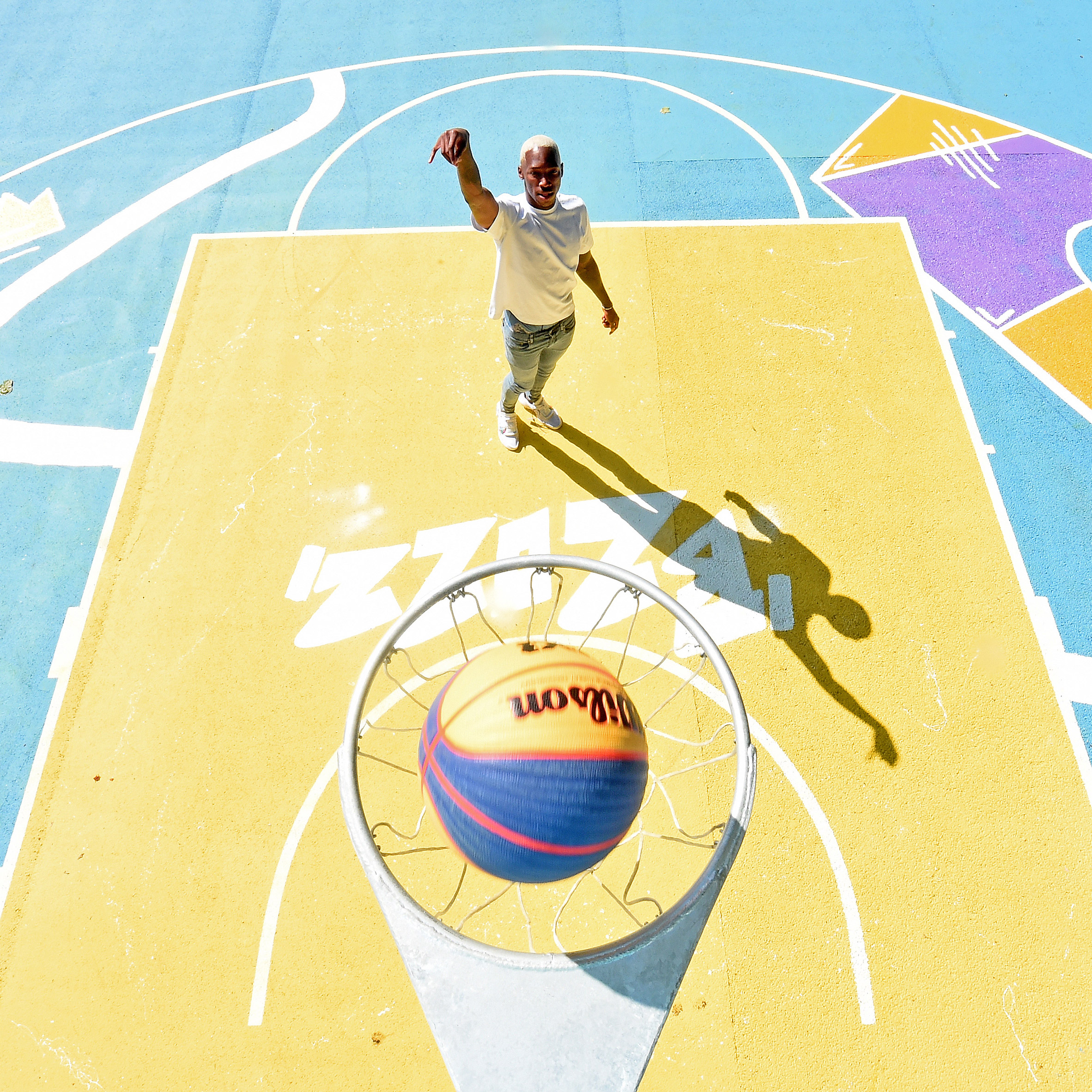 Bright yellows and blues were painted onto the court in a bid to attract locals and children to the game.

The design includes features that symbolise the city of Birmingham. For example, a crown has been painted onto the concrete which reflects The Jewellery Quarter in Birmingham.

Find out more about the Summerfield Park court› 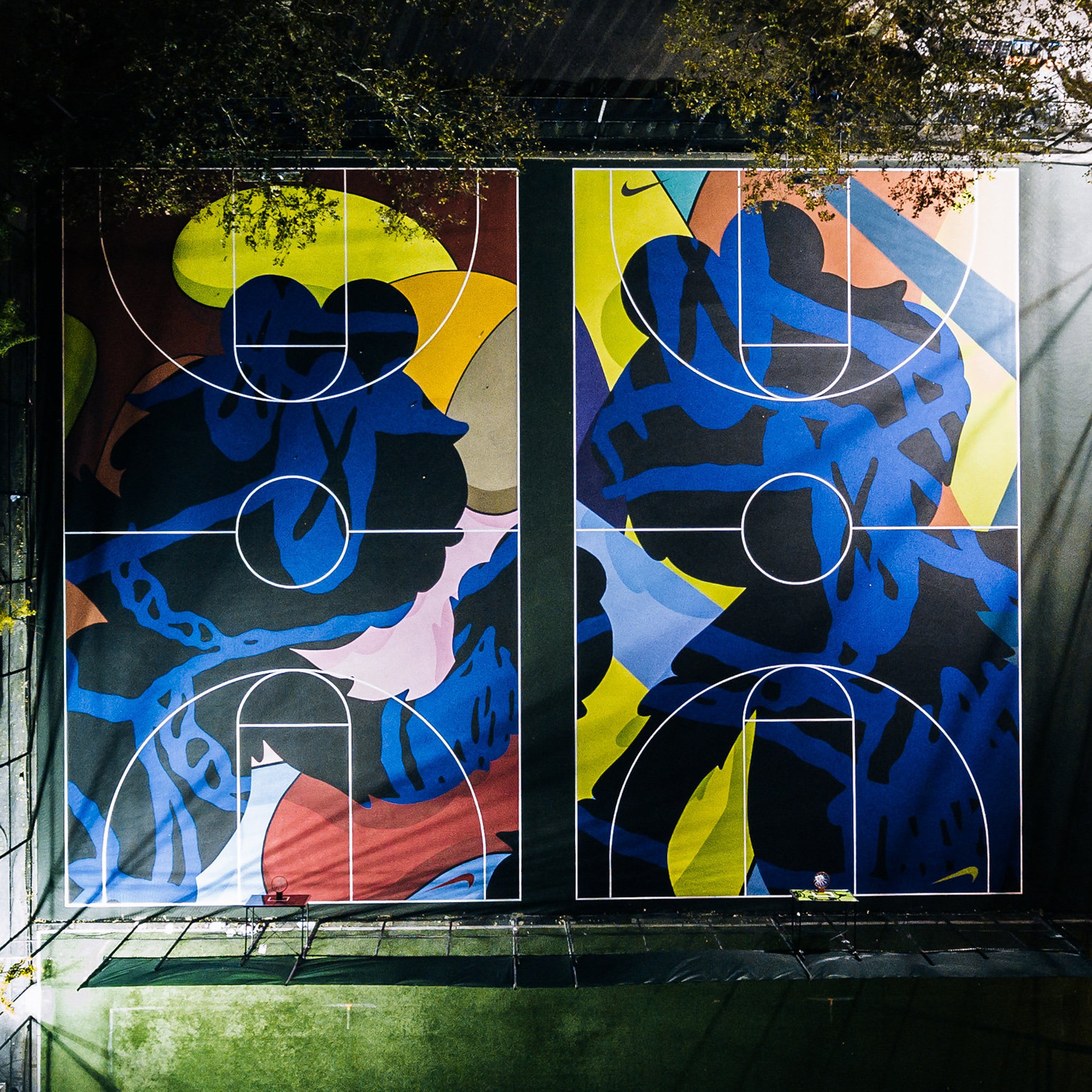 Nike called on Brooklyn-based artist Kaws to illustrate these two basketball courts which are located next to each other on Manhattan’s Stanton Street in New York City.

The artist, who is known for his vibrantly coloured, cartoonish works, covered two courts in his distinctive style.

An abstract version of Elmo and Cookie Monster – characters from the popular children’s TV show Sesame Street, have been painted onto the courts with signature crossed-out eyes.

Find out more about the Stanton Street courts› 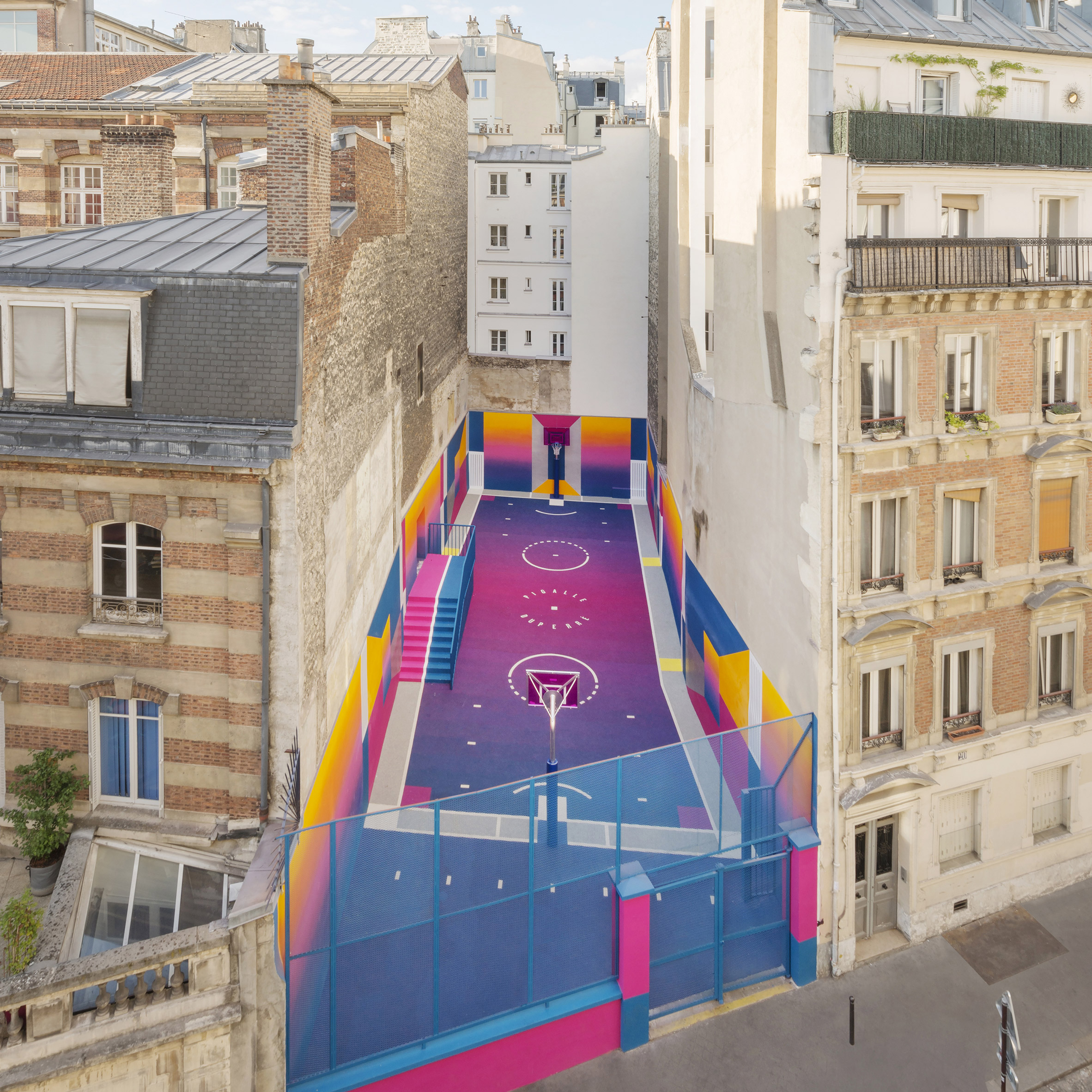 Pigalle Duperré in Paris, France, by Ill-Studio and Pigalle

Ill-Studio and Pigalle joined forces again to revisit a basketball court they refurbished in 2015. The designers replaced the old block colours with shades of blue, pink, purple and orange.

This time, the collaborators enlisted the support of sports brand Nike, to redesign the compact and irregularly shaped site.

Backboards made from translucent pink plastic were added, while the playing area and zones are marked out in white.

Find out more about Pigalle Duperré› 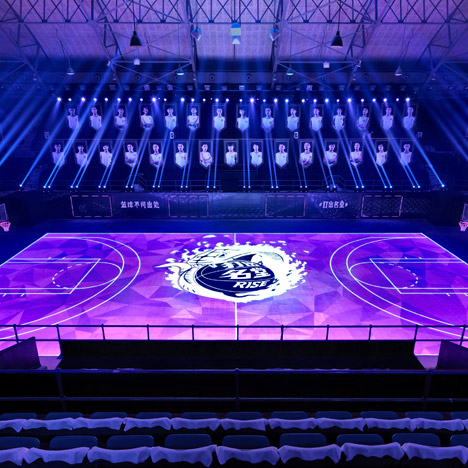 House of Mamba court in Shanghai, by Nike

Designed to provide a place for American star Kobe Bryant to teach his skills to young players in the Nike RISE initiative, the court features classic court markings alongside Nike’s RISE branding.

When the court isn’t needed for training and games purposes, the LED surface can display almost any combination of moving images, graphics and colours.

Find out more about the House of Mamba court › 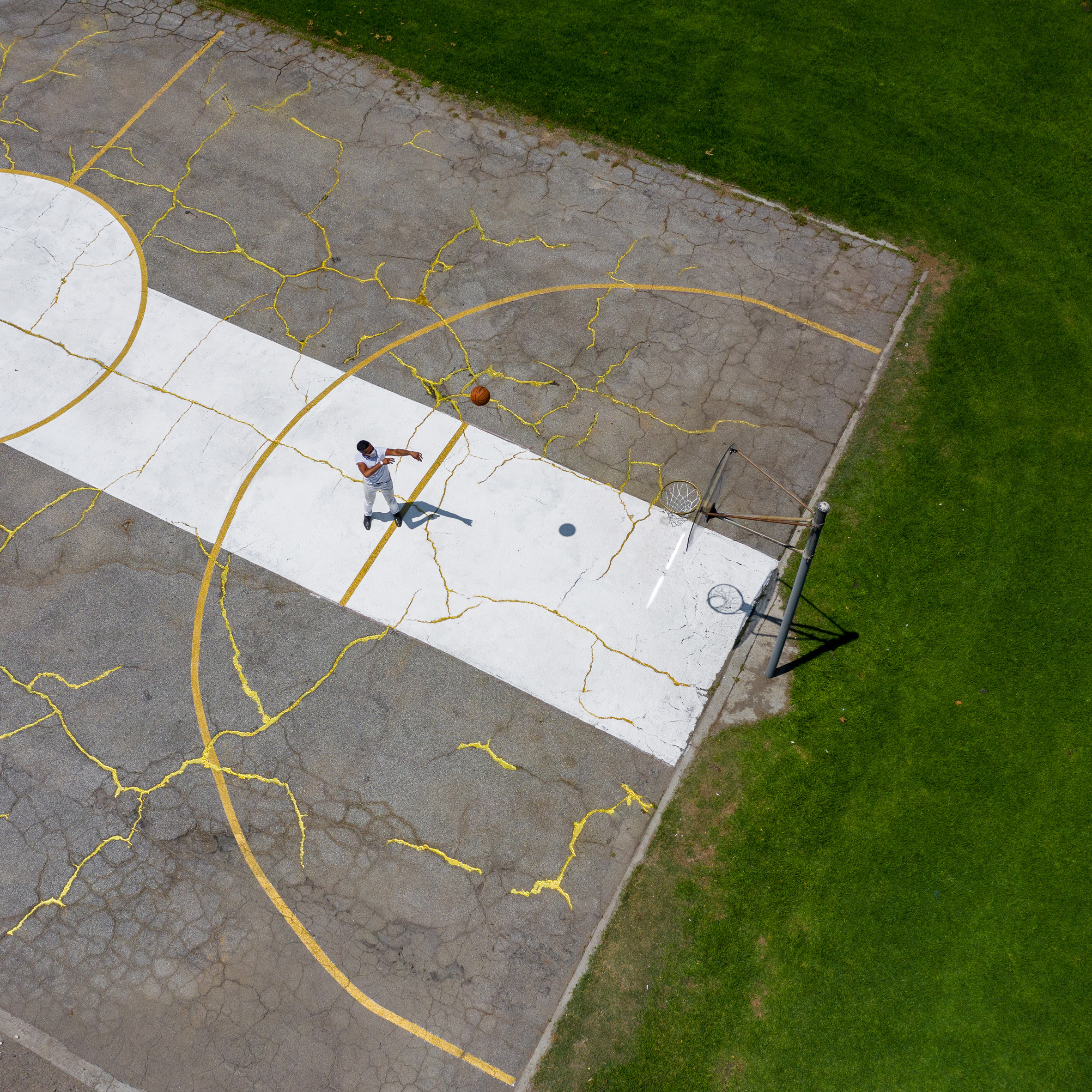 Artist Victor Solomon has attempted to reconcile the many cracks and crevices found in this Los Angeles basketball court using the Japanese art of Kintsugi.

Gold resin lines run across the court in a vein-like manner, connecting the broken up pieces of worn grey concrete.

The artist drew on his knowledge of Kintsugi, which involves repairing broken pottery with lacquer mixed with powdered precious metals, in order to highlight, rather than conceal, the breakage.

Find out more about Kintsugi Court› 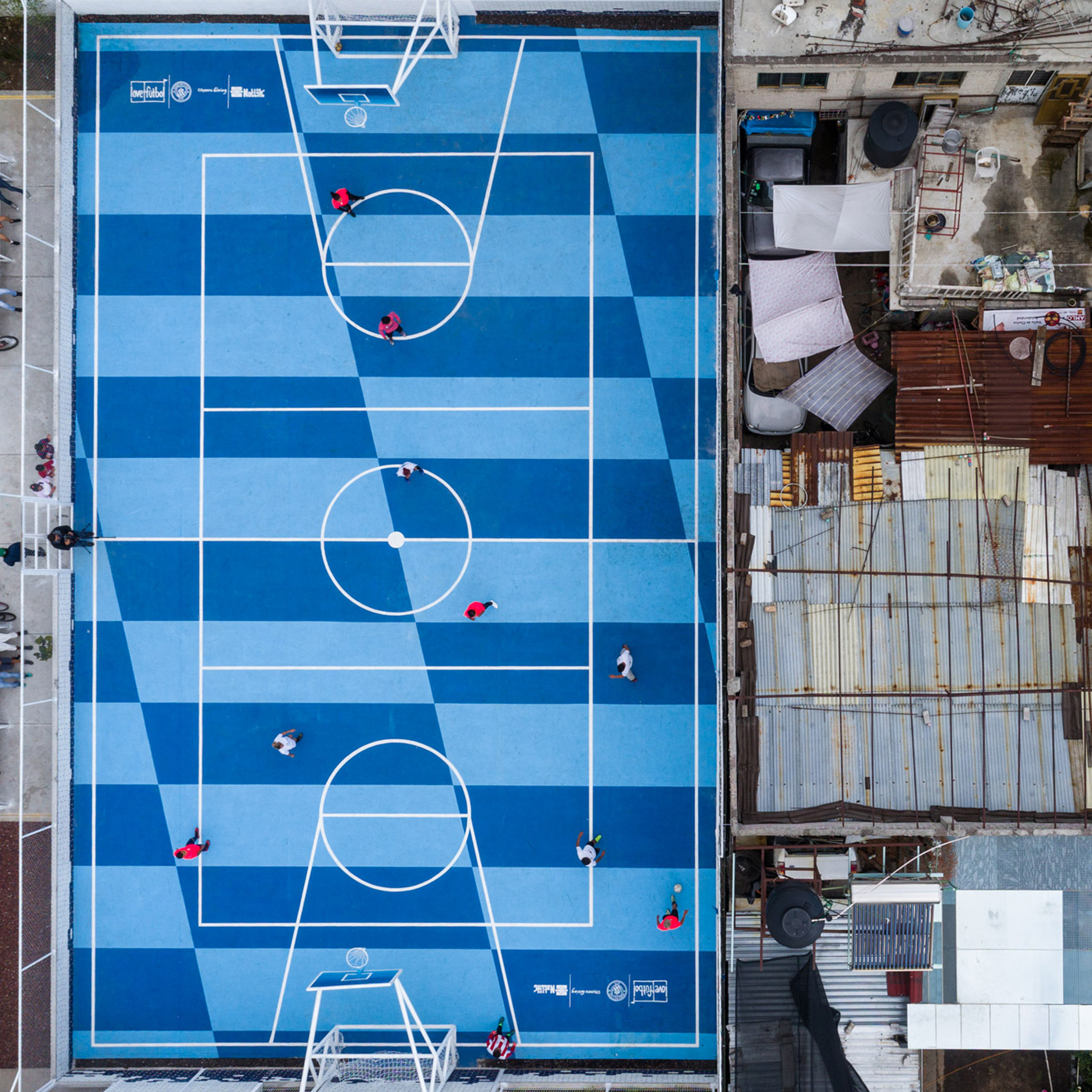 La Doce in Mexico City, by All Arquitectura Mexico

Mexican design studio All Arquitectura created a vibrant football and basketball court for one of the most impoverished and violent areas of Mexico City.

The designer covered the surface in a stretched and slanted chequerboard pattern in two bright shades of blue.

Overall, the revamped court adds colour and atmosphere to the area, which is otherwise dominated by run-down apartment shacks and deteriorating buildings.

Find out more about La Doce›

The post Ten colourful basketball courts from around the world appeared first on Dezeen.