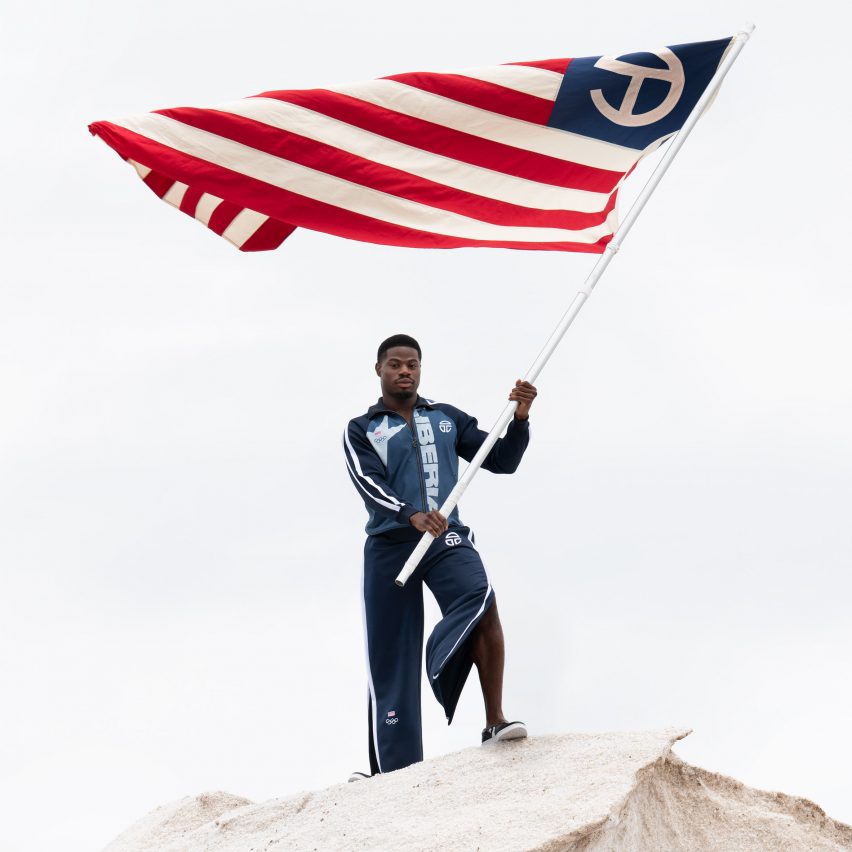 New York-based fashion brand Telfar has designed a collection of unisex uniforms for the Liberian team at the Tokyo 2020 Olympics.

Liberian-American fashion designer Telfar Clemens and his business partner Babak Radboy created unitards, gowns, tank tops and other clothing items for the Liberian Olympic team to wear during the games.

Clemens sketched the designs, some of which debuted at the Olympic opening ceremony in the Kengo Kuma-designed Tokyo National Stadium on Friday, while in Africa.

His immediate surroundings were the inspiration for the collection.

“The garments tell the story of a journey of recognition — in which Telfar saw the roots of his design DNA all around him in the streets of a country with a history deeply entwined with America’s own,” the designers told Dezeen.

“In this sense, the Liberian National Team manifests a profound narrative of repatriation. Telfar, like the athletes who make up the team, is asked to represent something much deeper than a nation.”

The brand, which is best known for its iconic fake leather shopping bags, has printed its own “T” logo on the front of the uniform, giving it a distinctively Telfar aesthetic.

Further notable Telfar styling choices can be seen in the one-shoulder tank tops and the loose-fitting tracksuits.

The uniform incorporates shades of the colours on the Liberian flag – blue, red and white – as well as gold. Large stars have been printed onto the clothes in a nod to the single star on the flag.

African clothing styles also feature in the genderless collection. The African lappa – a traditional colourful skirt or dress that wraps around the wearer – manifests itself as a tie-up garment that can be worn by both male and female athletes.

“The traditional African lappa, which Telfar has produced since 2009 without knowing its origin, is rendered in navy jersey and engineered with graphics and pockets,” said the designers.

The word Liberia is printed in capital letters along the side of the clothes.

The designers also looked at the global supply chain of clothes to inform the design.

“The collection traces logistics of global distribution networks backwards from their point of termination: in the barrels and containers of used and surplus clothes from which much of Africa — and therefore the world — fashions itself.”

Telfar was announced as the official sponsor of the Liberian team at the Tokyo 2020 Olympic Games last month. The brand will launch an Olympics-informed commercial collection after the games.

Nike is another major fashion brand that has designed uniforms for the Tokyo 2020 Olympics. The sportswear company produced basketball and soccer jerseys for the American team. It also created the first-ever Olympic skateboarding uniforms for France, Brasil and the United States.

Photography is by Jason Nocito.