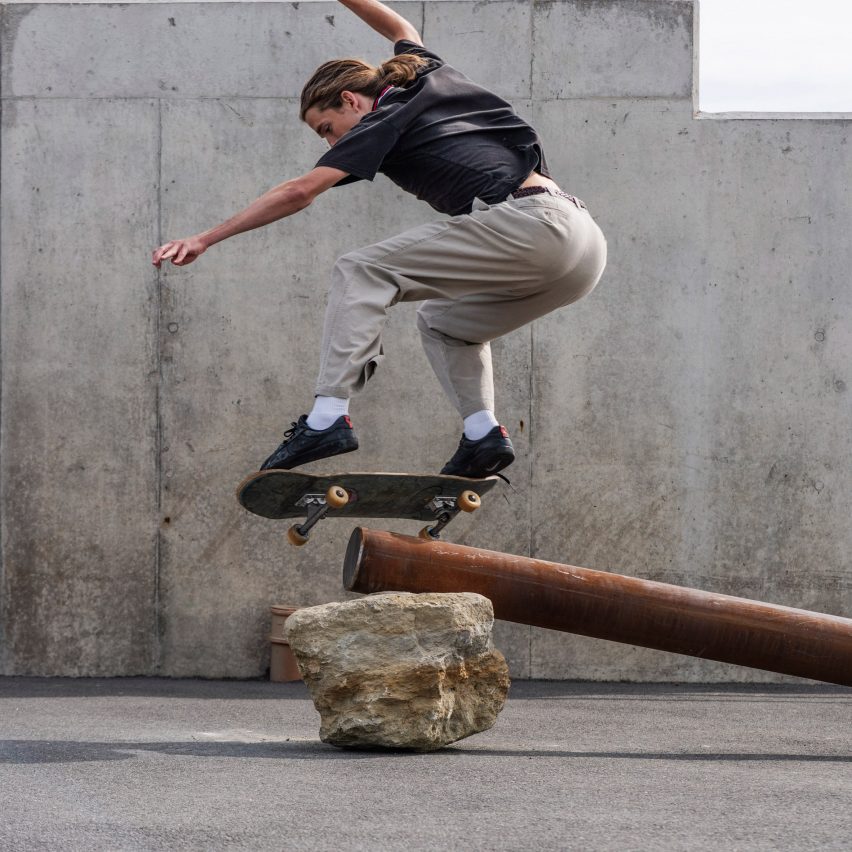 Architecture collective Assemble is among 25 artists that have designed public installations for the Creative Folkestone Triennial, alongside artist Rana Begum and designer Morag Myerscough.

Now in its fifth year, the event has seen public spaces across Folkestone filled with 27 artworks ranging from a giant lantern on top of the town’s mosque to kaleidoscopic beach huts and sculptures designed to be skated on.

The triennial’s installations seek to engage directly with the Folkestone community in order to give them a sense of ownership over the artworks, a number of which will remain in place even after the event comes to a close on 2 November 2021.

Among them are a series of nine “skatable sculptures”, created by Assemble in collaboration with local skaters, that are strewn across a section of the town’s restored Harbour Arm promenade.

They were made from local materials including raw Kentish ragstone found on the beach and steel sourced from a fabricator in nearby Ashford.

“Our main starting point was this idea that skateboarding is about appropriating found or existing aspects of the public realm and adapting them through resourceful, low-tech, DIY means,” Assemble co-founder Jane Hall told Dezeen.

“Skaters will appropriate anything for skateboarding but are also unbelievably particular, within a couple of millimetres tolerance, about what makes a good edge to do tricks on,” she continued.

“So it’s interesting to design for because you’re constantly having to make sure that really weird things are completely accurate while the rest is not accurate at all.”

This summer, a new Olympic-standard, multi-storey skate park will open in Folkestone, just as the sport is set to make its debut at the Tokyo 2020 Games.

But with Skating Situations, Assemble hopes to pay homage to skateboarding’s grassroots origins, which Hall says have fostered a unique respect and duty of care for public spaces.

“Skateboarders are custodians and guardians of the public realm,” she said.

“They really care about the quality of public space and how it is used. They recognise these spots, in which no one else would see a significance. It’s a whole different way of reading public space.”

Illuminated from within, the artwork casts shadows onto the mosque through its acrylic panels, which are rendered in “Turkish delight” colours and cut with motifs chosen in collaboration with the local community.

The hope is to draw in visitors and investment to help develop the building – a converted mill from the 1800s – to better fulfil its new purpose.

Saleem, who recently built replicas of three London mosques for the Venice Architecture Biennale, worked with the centre’s organising committee to drawn up plans for what this redevelopment could look like, which are displayed underneath the lantern.

Using a similar scaffolding structure as the lantern, Myerscough created a viewing platform that opens onto a panorama of an overgrown former gasworks site, which was previously obscured from local residents by a brick wall.

Constructed in the distinctive shape of a gas holder, the entrance pavilion was emblazoned with colourful slogans that were written and painted by people living in the area.

“Now you can walk out here and get this view nobody has seen for 60 years except for the pigeons,” the designer said.

“I also wanted the people who were involved to feel empowered that they’d made this piece of work. Doing workshops is one thing but then actually physically making it has a whole different feeling to it.”

Elsewhere at the Folkestone Triennial 2021, Begum has cast a row of refurbished beach huts along the shorefront promenade in a rainbow gradient of colours.

Meanwhile, Japanese artist Mariko Hori created boulders from pulhamite, a kind of fake-rock finish used by zoos, filled with objects donated by residents that will be exposed over time as the surface is worn down by the elements.

Previous editions of the event have seen Richard Woods build six cartoon bungalows across Folkestone as a comment on the housing crisis while design duo Something & Son created a sustainable farming initiative concealed behind a traditional fish and chip shop facade.

The Creative Folkestone Triennial 2021 is on view from 22 July to 2 November in various locations across Folkestone. See Dezeen Events Guide for an up-to-date list of architecture and design events taking place around the world.