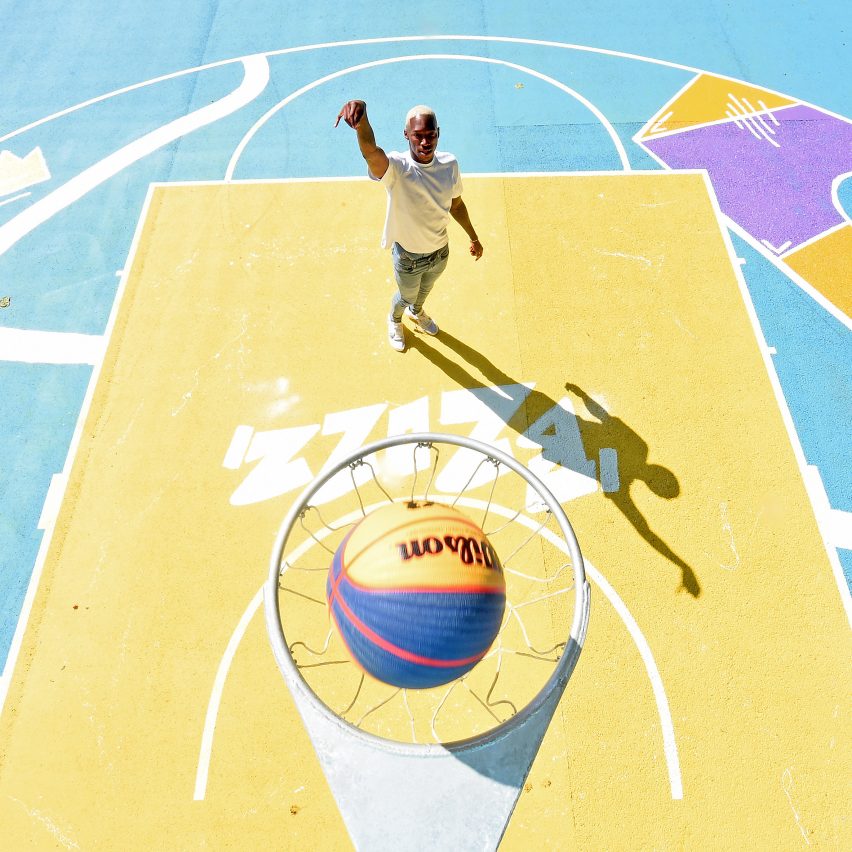 Alongside promoting the Games, the designers wanted the court to encourage more local people to play basketball and engage with the installation.

Vibrant colours such as bright yellow and sky blue were used to create an enticing and playful court. The same colour palette was used for the wider Birmingham 2022 Commonwealth Games logo and branding.

“If kids see some shit that’s as colourful as this basketball court, it’s going to attract them,” Josephs told Dezeen.

“They’re going to want to have a look and once you’re on there it’s easier to play. It’s going to draw in kids and stop kids from being on the street.”

The court also features a mural with geometric shapes and swirling lines designed by Zuke.

The court’s Birmingham location was used to inform the design, which “represents the city in a lot of ways”.

“There’s a crown on there because we’ve got The Jewellery Quarter in Birmingham,” Josephs explained.

“It’s on concrete as well and we’re a hard-nosed city; we like to work hard, we like getting stuck in. We’re colourful, we’re diverse.”

“We wanted to highlight the city and the different colours are my interpretation of the city” he continued.

Josephs and Zuke initially worked on the project together virtually by sending each other designs and ideas via WhatsApp.

“I’m in Manchester and he’s in Birmingham so we were talking on WhatsApp,” Joseph said.

“We just hit it off. We both had the same idea around wanting to do something to represent the city and were just bouncing ideas off each other.”

Despite creating the designs individually, Zuke and Josephs worked on establishing a uniform style.

“We both wanted to ensure the same style altogether because it’s one city. It’s meant to represent the differences but at the same time, we’re all one,” Josephs said.

Although the court is meant to act as a colourful celebration of the city, the designers are also aware of the harsher realities of inner-city life around Summerfield Park.

“Obviously there is a lot of gang stuff around here so we want to make it a little bit more inclusive so all kids have something,” said Josephs.

The court is now open for people to play basketball on and will remain so after the Games.

“It is now a landmark within the park, open for everyone to use and leaves a lasting legacy of the Games in the heart of the West Midlands community,” the Birmingham 2022 Commonwealth Games stated.

“The revamped space aims to inspire participation in the sport.”

Colourful basketball courts have been cropping up around the world. Designer Yinka Ilori 3D-printed a multicoloured court in the financial district of London. Over in Belgium, artist Katrien Vanderlinden painted colourful shapes on a basketball court in Aalst.