Ohmie is a 3D-printed lamp made from orange peels 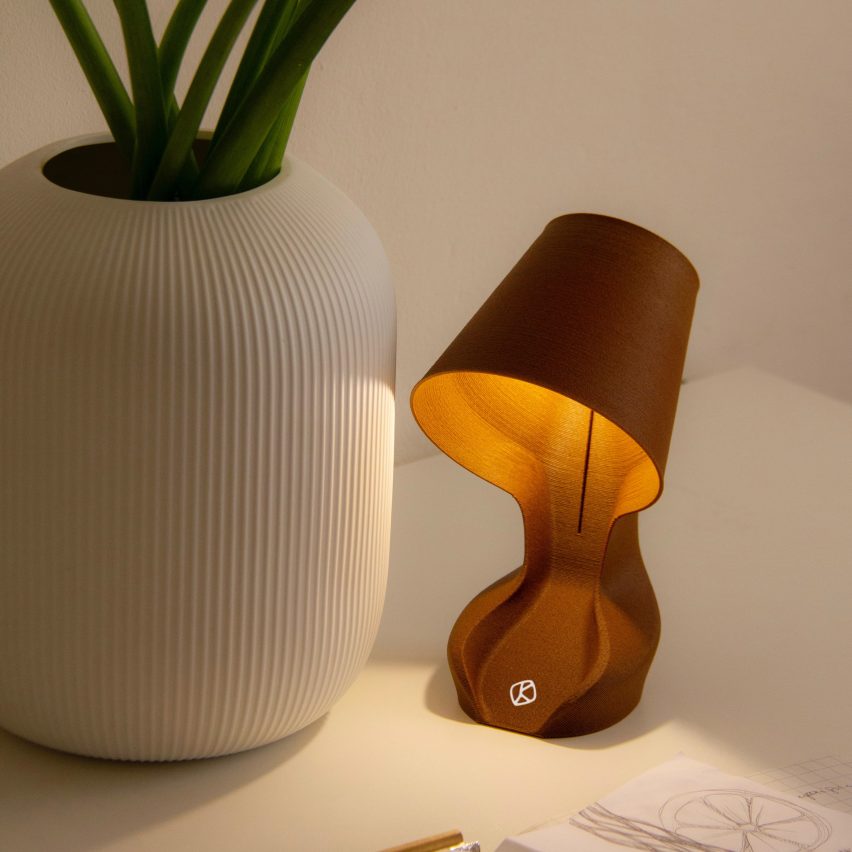 Milan-based start-up Krill Design has 3D printed Sicilian orange peels into a tactile lamp that can be composted along with organic household waste.

The designers at Krill Design turned to orange peel to create the lightweight lamp because of the citrus fruit’s ubiquity in Sicily, Italy.

Each lamp is made from the discarded peels of two or three oranges sourced from a family-owned food producer in the Messina province of Sicily.

“We needed a material that would not run out and given that Sicily alone produces about 3 per cent of global oranges, that allows us to stock up on the peels and be able to always produce Ohmie,” Krill Design told Dezeen.

“We are keen on promoting a local and fully Italian supply and production chain. Oranges are one of the many Italian produces renowned worldwide and we believe it is a nice symbol.”

From its patterned surface to its orangey smell and vibrant colour, the 23-centimetre-tall lamp was designed to reflect its origins.

The designers hope the lamp demonstrates how food waste can be successfully repurposed into an “eco-design product that is both “beautiful and functional”.

After use, the Ohmie lamp can be broken down by hand into smaller pieces before being thrown away with the household’s organic waste, the studio explained.

“The orange lamp, at the end of its life, can simply be broken into fragments and tossed with the household’s organic waste to be disposed of in composting facilities and be turned either into compost or biofuel depending on local dispositions,” said Krill Design.

Currently, the remains have to be sent to a composting facility instead of decomposing straight into nature.

“We decided to develop a material that, for now, would only decompose in industrial facilities for performance and durability reasons, but we would like to research more and achieve a biopolymer that can be durable and sturdy as well as easy composted in nature or in an at-home compost,” it added.

Krill Design used 3D-printing techniques to “avoid any form of waste during production”. The orange peels are ground down and combined with vegetable starch before being 3D printed.

“Once the peels have arrived in our office in Milan they are dried – the organic scraps need to have moisture level below four per cent – ground to a fine powder and sifted to make sure all grains are fine enough,” the studio said.

The peel powder is then sent to a compounding facility where it is added to a biopolymeric vegetable starch base. Afterwards, the orange biopolymer is produced in the form of pellets.

This is the only part of the production phase that is outsourced, the brand said.

“Only this phase of the process is outsourced as the machinery needed is extremely bulky and expensive,” Krill Design explained.

“After this, we extrude the orange filament from the pellet and use it within a 3D printer to bring Ohmie to life.”

Fruits have been used in a number of designs. Copenhagen-based brand Beyond Leather combined apple juice leftovers with natural rubber to create Leap, a plant-based alternative to leather, while Júlia Roca Vera has created a cosmetics line made from discarded fruits.

Photography is by Krill Design.

The post Ohmie is a 3D-printed lamp made from orange peels appeared first on Dezeen.

Filo chair by Ronan and Erwan Bouroullec for Mattiazzi