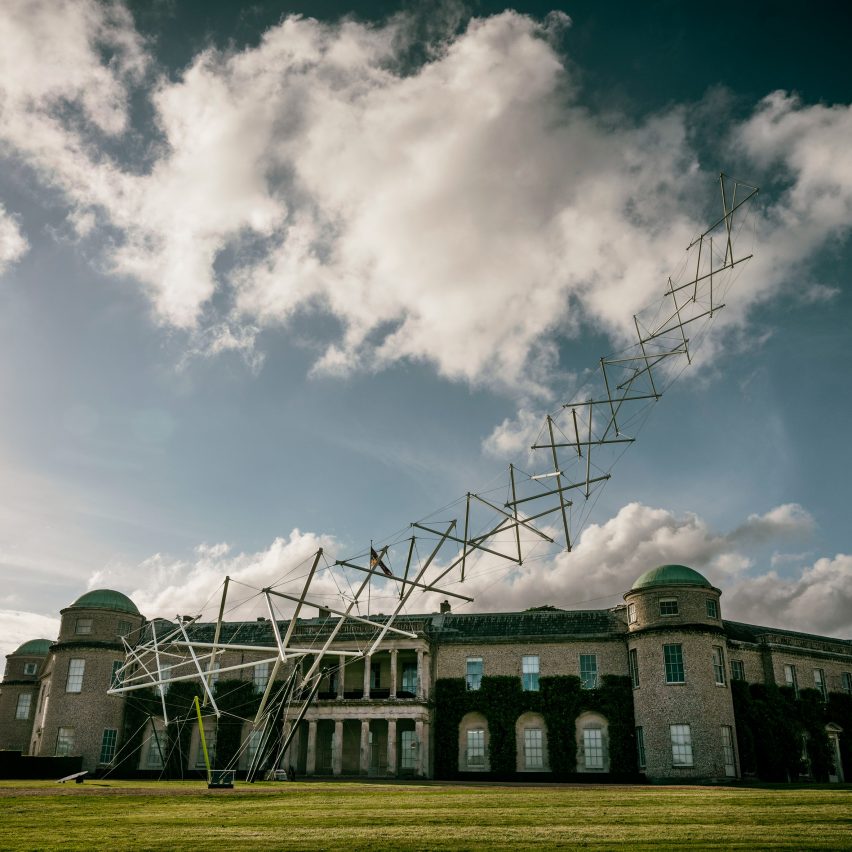 London-based production studio Unit9 has created a tensegrity structure at this year’s Goodwood Festival of Speed that can be transformed into a race track using an augmented reality app.

Named Lotus Aeroad, the 50-metre-long sculpture was built outside Goodwood House as the centrepiece for the motorsport festival, which took place from 8-11 July.

The lightweight tensegrity structure was informed by the design philosophy of British car brand Lotus, which sponsored the structure.

“Lotus Aeroad is inspired by Lotus founder Colin Chapman’s philosophy of ‘simplify, then add lightness’, which led us to use tensegrity as a design and engineering principle,” Unit9‘s creative director Kate Lynham told Dezeen.

Balanced on a supporting frame, the structure was made from steel tubes held in tension by stainless steel cables.

According to the designers, it forms a cantilever that mimics the “rooster tail” shape of the Lotus Evija, which was the brand’s first electric hypercar.

“We wanted the structure to be made more from air than any other material.”

The team developed the structure using computer-based form-finding techniques. The designers decided on the direction and form of each component, and then a computer programme was used to create a structure that would be able to stand on its own.

“In order to follow the correct shape and hence ensure each member carries the anticipated force, the erection has to be extremely accurate,” said Stephen Melville, the founding director of Format Engineers.

“This has to be carried out in empty space, akin to an unstable 3D jigsaw puzzle that needs many of the elements to be in place before it stands under its own weight,” he continued.

Visitors to the Goodwood Festival of Speed could download the Lotus Aeroad app to transform the structure into two race tracks using augmented reality.

Unit9 believes that this created “a richer experience and bring additional elements to the sculpture, without increasing the weight or load”.

“In-person attendees can use the AR app to transform the sculpture into a dramatically curved race track that brings to life the Lotus Elise, Evore, Exige and, most excitingly, the brand-new Lotus Emira as it zooms around the feature,” said Lynham.

Virtual attendees at the Goodwood Festival of Speed were also able to download the app and watch the cars race around the structure from their phones.

“At-home digital viewers can view the entire structure in AR, scaling it to fit their environment wherever they are in the world,” explained Lynham.

Another tensegrity structure that has made news headlines recently is Project Bunny Rabbit’s All Along the Watchtower. The bamboo structure is one of two winners of the Antepavilion architecture competition, which happens every year.

In June, police threatened to remove the structure from its location on the roof of the Hoxton Docks. Police raided the building on the hunt for members of climate activist group Extinction Rebellion.

The group is known for its tensegrity structures and supporters of Extinction Rebellion had attended workshops at Antepavilion to help build All Along the Watchtower.