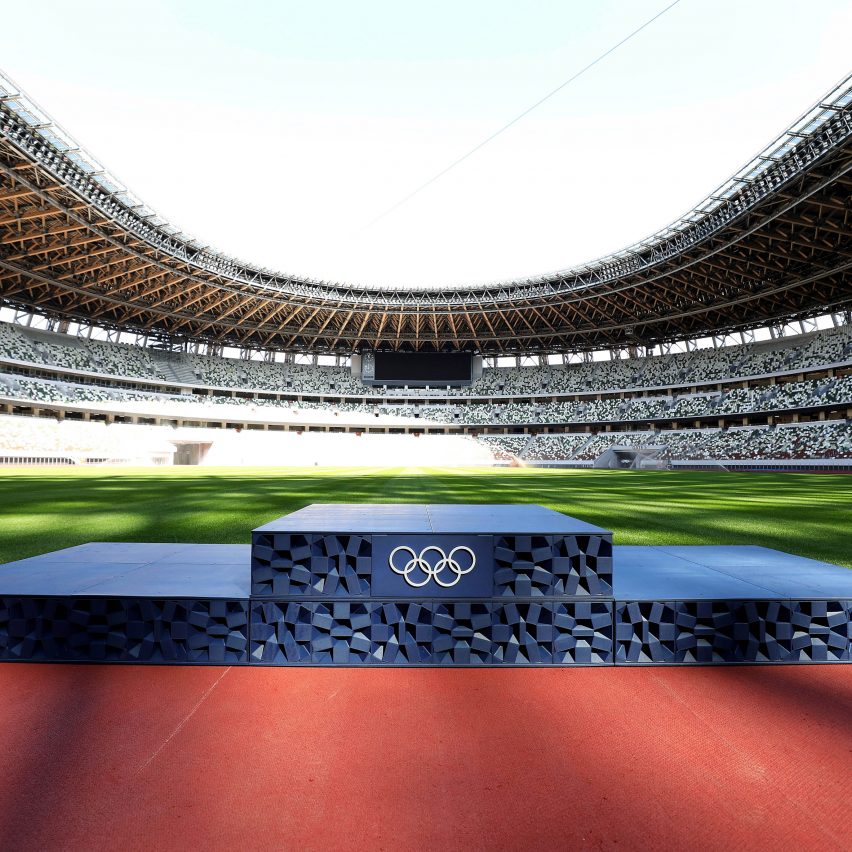 The winners at the Tokyo 2020 Olympics and Paralympics will be crowned on podiums designed by Japanese artist Asao Tokolo, which were made from 24.5 tonnes of discarded household plastics.

Over the course of nine months, the Japanese public donated the equivalent of 400,000 bottles of laundry detergent via more than 2,000 collection boxes that were installed in department stores and schools across Japan.

Recycled and turned into filaments, they were used to 3D print all 98 podiums that will be used during the Games.

The initiative forms part of a wider effort to involve everyday people in the event’s sustainability plan, which has also seen citizens donate old electronic devices so they could be turned into the Tokyo 2020 Olympic medals.

“The podiums were created with the purpose of showing the world the different ways in which a sustainable society can be realised, and engaged the whole population of Japan in the podium production process in a historic Games’ first,” the organisers explained.

Each podium is constructed of a number of small cube-shaped modules that were connected to form the traditional three pedestals.

Alternatively, they can also be turned into a flattened, accessible platform for the Paralympics while a socially distanced version is currently being designed to align with Japan’s recently-declared state of emergency.

Based on the same chequerboard pattern that Tokolo previously developed for the Tokyo 2020 logos, the cube modules are 3D-printed with the help of a team led by Hiroya Tanaka, the founder of Japan’s first Fab Lab.

With the help of additive manufacturing, the team was able to use the pattern as the very structure of the pedestals, rather than simply superimposing it on the outside.

“Most podiums employ wrapping for their design,” Tokolo explained. “But instead of covering the platform with some decorative print, our podium is based on the philosophy of cubes, which form the structure itself.”

The modules are rendered in the same deep blue colour as the Tokyo 2020 logo, nodding to Japan’s historical production of indigo dye.

According to Tokolo, infusing the 3D printing filament with pigments resulted in a more vibrant and intense colour than would have been possible through regular prints or paints.

“The podium looks different depending on the amount of light shed on it, so we’re looking forward to seeing how it will look near a swimming pool where light reflects against the water,” he said.

Much like the Tokyo 2020 Olympic torch, designed by Tokujin Yoshioka, the Olympic rings on the front of the podiums are rendered in recycled aluminium that was originally used to form temporary housing for those displaced by 2011’s Great East Japan earthquake.

In addition to making use of waste materials to create iconic Olympic props, the Tokyo 2020 Organising Committee has set goals to reuse or recycle 65 per cent of all waste generated through the operation of the Games and 99 per cent of all items procured for the games.

The pedestals will ultimately be turned back into shampoo and detergent bottles by consumer goods company Procter & Gamble, which is an Olympic sponsor.

The consumer goods conglomerate was named the seventh-worst plastic polluter in the world last year as part of an annual audit by the Break Free From Plastic initiative.

All 24.5 tonnes of plastic packaging that was used to make the podiums amount to less than 0.004 per cent of the 714,000 tonnes the company produces every year.