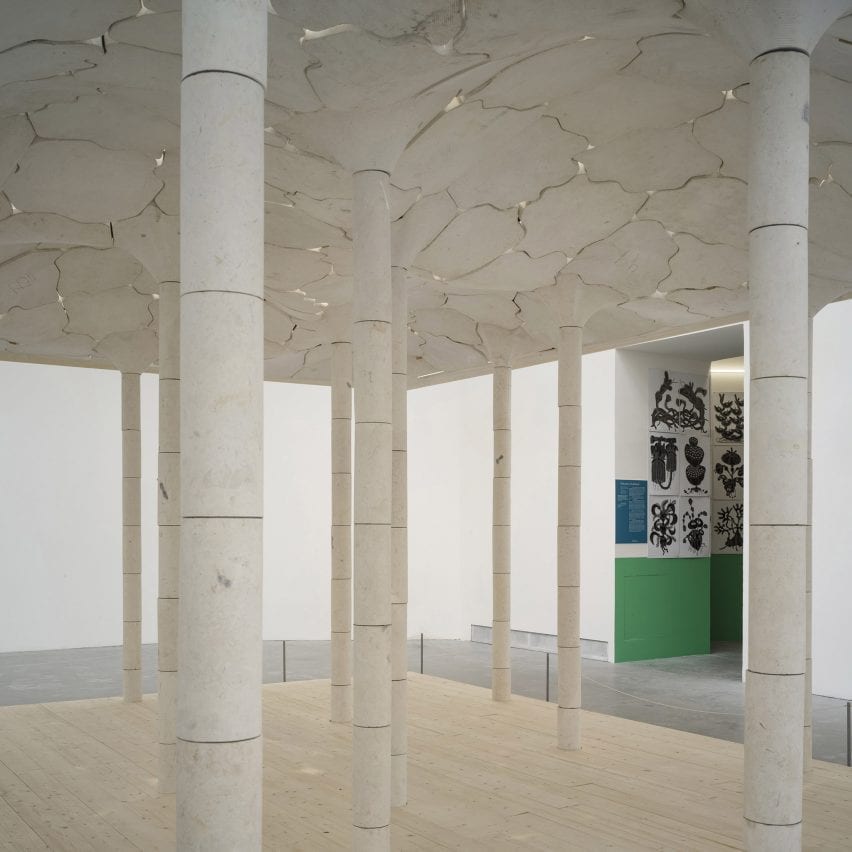 Palestinian studio AAU Anastas has created an installation with a vaulted stone ceiling at the 2021 Venice Architecture Biennale as part of an ongoing project challenging the origins of stone architecture.

Titled All-Purpose, the pavilion has a roof made of Palestinian limestone, cut into pieces that fit together like a jigsaw and arranged to dome upwards in two places.

The work builds on AAU Anastas‘ six-year research project Stonematters, which looks at the history and experiments with the future of stone.

The studio’s co-founders, brothers Yousef and Elias Anastas, want to revive the use of stone as a structural material, while also challenging “the imperial idea” that sophisticated construction techniques were born in the West and exported out.

“We are challenging the way knowhows, and in particular stone techniques, have been historically presented as an imported knowledge,” Yousef Anastas told Dezeen.

“Once you start scratching the surface, you realise not only that techniques have always been a blend of knowledge from different civilisations, but also that in Palestine for instance, stone has been a major part of domestic and common architecture.”

The Anastases said that in the region around Palestine, stone architecture is associated with the European Christian crusaders, but their research reinforces that stone techniques have a diverse history.

“Stereotomy is often associated with the Crusaders,” said Yousef Anastas. “However, following traces of stone techniques and architectural forms often leads to much more diverse origins.”

“The first examples of the details surrounding the stone entrance of the Crusaders-built Church of Saint Anne in Jerusalem are actually found in Cairo, Egypt and date back to the Mamluk period,” he continued.

“Another example is a stone vault typology found in common habitat architecture in Jerusalem and continuously used since the 11th century, and that is very similar to Renaissance palaces’ ceiling shapes.”

For the Venice Biennale, AAU Anastas focused on making a stone vaulted roof that would delineate spaces through its structure. The All-Purpose installation has two domes that can be understood as forming rooms, with a common space in between.

Working with limestone from the West Bank, AAU Anastas constructed the doming ceiling using jigsaw-like pieces that are individually as minimally curved as possible, in order to cut down on waste and machine fabrication time.

The studio said the roof was technically quite simple, with the only sophisticated part being the interface between stones, which are all doubly curved congruent surfaces.

AAU Anastas wants its work to challenge how stone is used in Palestine today, as primarily a cladding material only.

The Anastases trace this back to the 1918 masterplan for Jerusalem by architect Sir William Mclean, who required all of its buildings to be faced in stone.

“The repercussions of a law we inherited from the British mandate has implications on architecture, urbanism, politics, culture and the environment that are disastrous,” said Yousef Anastas.

“This law – officially set to create a unity in the built landscape – has immediately set new borders in Jerusalem with regards to buildings faced with stone or not,” he continued.

“For instance, demographically all neighbourhoods with buildings not made out of stone (mainly Arab neighbourhoods) have been de facto excluded from Jerusalem. Thus its demography has been transformed, having repercussions on the political reclaims of Jerusalem.”

He said that at the same time, stone cladding had been adopted across most Palestinian cities, “creating a monotonous contemporary city that is losing landmarks of the historical of Palestinian architecture.”

There is also the issue of the overexploitation of the region’s stone quarries, which are located in Palestinian territory under Israeli control, in the Area C division of the West Bank.

All-Purpose is on display in the Central Pavilion of the Giardini as part of the main Venice Architecture Biennale exhibition, curated by Hashim Sarkis around the theme “How will we live together?”

On opening night, the installation was used as a stage for artist performances organised by the radio programme Sonic Liberation Front from Radio AlHara – an online community station also co-founded by the Anastas brothers.

AAU Anastas is based in Bethlehem. Its previous work includes the lattice-like Stonematters pavilion in Jericho and the Qamt stone bench, recently acquired by London’s V&A museum.

The brothers also run a furniture-making network, Local Industries, bringing together makers, artisans and designers, and a research department called Scales. They will also soon launch The Wonder Cabinet, which they describe as a multipurpose cultural platform for artists and artisans.

Also on display in the Central Pavilion at the Giardini is Studio Other Spaces’ Future Assembly installation, which imagines an international environmental response modelled along the lines of the United Nations.

Photography is by Antonio Ottomanelli.