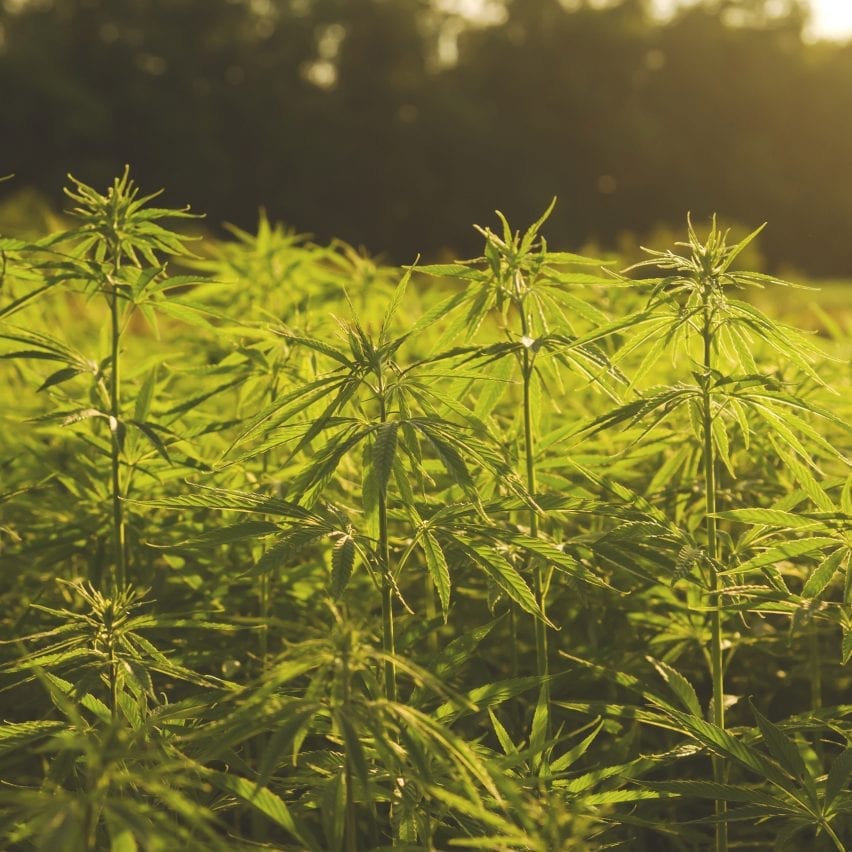 Hemp can capture atmospheric carbon twice as effectively as forests while providing carbon-negative biomaterials for architects and designers, according to Cambridge University researcher Darshil Shah.

“Numerous studies estimate that hemp is one of the best CO2-to-biomass converters,” said Shah, who is senior researcher at the Centre for Natural Material Innovation at Cambridge.

“It’s even more effective than trees,” he said. “Industrial hemp absorbs between 8 to 15 tonnes of CO2 per hectare of cultivation.”

“In comparison, forests typically capture 2 to 6 tonnes of CO2 per hectare per year depending on the number of years of growth, the climatic region, the type of trees etc.”

Carbon-negative bioplastics and construction materials made from the plant can be used to “replace fibreglass composites, aluminium and other materials in a range of applications,” he added.

The Centre for Natural Material Innovation, part of Cambridge University’s Department of Architecture, conducts research into biomaterials in order to “transform the way we build to achieve zero carbon emissions.”

Hemp is a “multi-purpose crop”

Shah’s work covers engineered wood, bamboo and natural fibre composites as well as hemp, which he described as “a multi-purpose crop that offers materials and resources in multiple forms.”

Hemp, or industrial hemp, is a variety of the Cannabis sativa plant but contains very low levels of the psychoactive compound tetrahydrocannabinol (THC) compared to marijuana, which is another variety.

The fast-growing plant has been grown for thousands of years for its fibres, which were traditionally used for rope, textiles and paper.

Today it is increasingly being used to make bioplastics, construction materials and biofuels as well as products containing cannabidiol (CBD), an active ingredient that is touted for its alleged health benefits.

The strong, stiff fibres that form the outside of the stem can be used to produce bioplastic products including automotive parts and even wind-turbine blades and cladding panels, Shah said.

“With the hemp bioplastic cladding panels, we find that they are a suitable alternative to aluminium, bitumen-plastic and galvanised steel panels, requiring only 15 to 60 per cent of the energy in its production.”

The shives, which are the woody inner part of the stem, can be used to make “hempcrete“, a non-load-bearing wall infill and insulation material.

Shah pointed out that in contrast to conventional agriculture, which emits large amounts of carbon, hemp farms do the opposite.

“Agricultural land in the UK, on average, emits around 3 tonnes of CO2 per hectare per year,” he said. “Hemp offers an incredible scope to grow a better future.” In addition, hemp produces more usable fibres her hectare than forestry.

“We can produce bioplastics that can replace fibreglass composites”

Shah recently collaborated with film-maker Steve Barron, who has converted the 53-acre Margent Farm in Cambridgeshire to hemp production and used the crop to build his own house.

The farm grows industrial hemp organically, which further reduces emissions compared to conventional agriculture, where between 30 and 40 per cent of emissions come from fertilisers and pesticides.

Shah is working with the farm to develop new carbon-negative materials that could be used in manufacturing and construction.

“With Margent Farm’s hemp fibres, and using 100 per cent bio-based resins, we can produce bioplastics that can replace fibreglass composites, aluminium and other materials in a range of applications,” he said.

“We can use the wealth of textile science knowledge that humans have gathered over thousands of years to produce a range of textile fibre composites with properties suitable for non-structural products.”