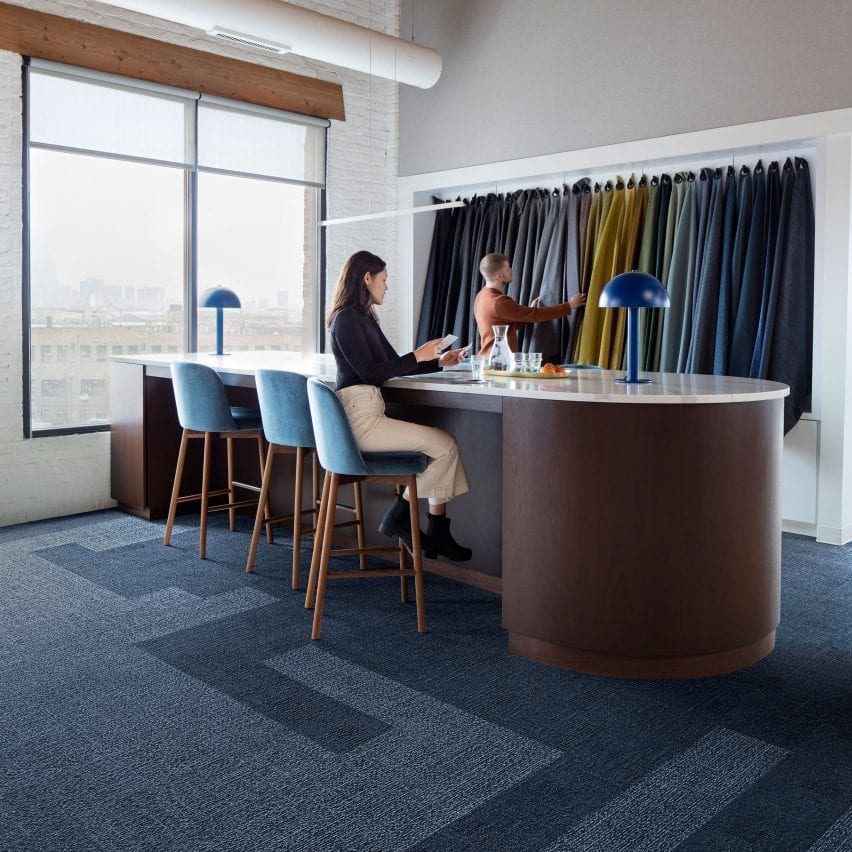 The brand has set itself an ambitious pathway to becoming a net remover of atmospheric carbon in less than 20 years. It claims all its products are carbon neutral and it launched its first carbon-negative carpet earlier this year.

“Our mission is called Climate Take Back, which is to run our business in a way that reverses global warming,” said Khoo, who is head of sustainability for Europe, Australia, Asia, and Africa at the American brand.

“Our big long-term aim is to be carbon negative by 2040. We’re currently working on our science-based targets.”

Interface is one of the world’s largest manufacturers of carpet tiles. Based in Atlanta, Georgia, it has annual revenues of over $1 billion and employs more than 4,000 people worldwide.

The company was founded in 1973 by industrialist Ray Anderson, who came across carpet tiles in Europe and took the idea home to the USA.

Anderson became a committed environmentalist in 1994 when a customer asked what the petrochemical-dependent company was doing to address its impact on the planet. He was unable to answer the question.

He later read The Ecology of Commerce by environmentalist Paul Hawken, a seminal book that set out how businesses could help mend the ecological damage they had helped create.

This triggered a “spear in the chest” epiphany for Anderson.

“I was dumbfounded by how much I did not know about the environment and about the impacts of the industrial system on the environment,” he reportedly said, pledging to turn Interface into a sustainable company.

Anderson, who died in 2011, set the company a goal called “Mission Zero”, which aimed to ensure it had zero negative impact on the planet by 2020.

Company aims to be carbon negative by 2040

The brand claimed to have achieved this in 2019, a year ahead of target, and has subsequently set itself a new target to become carbon negative by 2040.

“We intend to be regenerative, to go beyond net-zero carbon to become carbon negative, where we remove more carbon than we put into the atmosphere as a result of our entire value chain,” said Khoo.

To achieve this, the company is measuring its own emissions as well as those of its supply chain to determine its carbon impact. This involves calculating the three classes of emissions as defined by the Scope 3 Standard, including those created by suppliers and customers.

“We are measuring and reporting our Scope 1, 2 and 3 emissions as part of our total carbon impact as an enterprise,” Khoo explained.

“This accounts for all of the carbon we’re responsible for putting into the atmosphere as a result of our business activities through our operations, our products and our supply chain.”

Company uses offsets for emissions it is unable to remove

Interface has hired consulting giant Apex to audit its efforts. “Checks and balances are key,” said Khoo. “Getting a third party to verify your claims is how we address the greenwashing claims. And when they find something they’re not happy with, it’s how we improve our programme.”

The company has been working since 1994 to reduce its environmental impact, increasing its use of recycled and biobased materials to 60 per cent by 2020 and running its facilities on renewable electricity.

It uses offsets to compensate for emissions it has been unable to remove, calculating that it has offset more than four million tonnes of carbon dioxide since it introduced its carbon-neutral carpet tiles in 2002.

The company uses a portfolio of offsets, although not all of them involve permanent removal of atmospheric CO2, which is the standard required to reach the United Nations’ definition of net-zero.

“We wanted to balance renewable energy with reforestation, which is slightly more expensive, but then we also wanted to use one-third of our portfolio or more social-based projects such as fuel-swapping cookstoves and water purification,” said Khoo.

Interface is now trying to move beyond carbon neutrality and make its entire product range carbon negative. Last year, it launched a carpet backing that it claims contains more embodied carbon in its recycled plastic and biomaterials that it emits from “cradle to gate”.

Again, these products are negative from “cradle to gate,” meaning that the brand doesn’t take account of what happens once the products leave the factory gate.

“It’s not carbon-negative for its full lifecycle because elements of transport and end-of-life use we can influence but we can’t control at this stage,” Khoo explained. “So we wanted to focus on going carbon negative with what we can control.”

Khoo admits the company still has a lot to do to reach its goal of becoming carbon negative but is hopeful that it can help trigger change among both suppliers and customers.

“Carpet tiles could be seen as very boring things,” he said. “It’s not the kind of thing you see on the news normally, but if we can change, if we can do that across our entire portfolio and lead in the market, many offices all around the world are going to start using a much more sustainable solution.”

Other companies that are striving to eliminate emissions from their supply chains include automotive brand Polestar, which is developing a carbon-neutral car, and Danish furniture brand Takt, which aims to become a net-zero business within the next few years.

The post Carpet brand Interface aims to run its business "in a way that reverses global warming" appeared first on Dezeen.