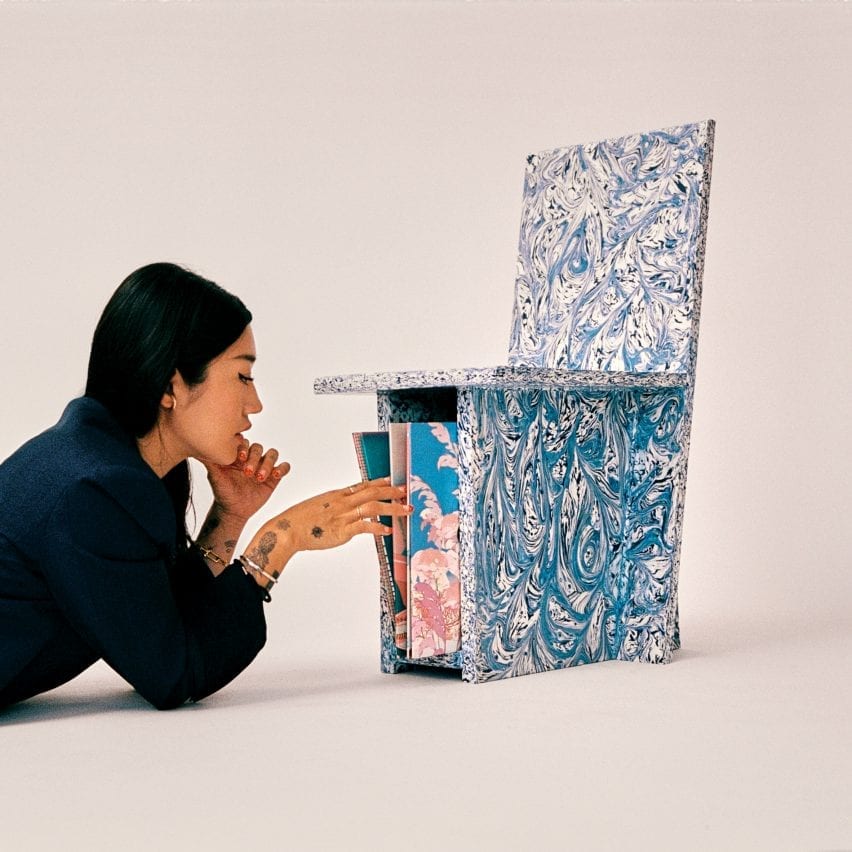 Design studio Space Available and techno DJ Peggy Gou have joined forces to create a chair made of plastic trash collected from Indonesian streets and waterways.

Each chair is made from 20 kilograms of recycled high-density polyethylene (HDPE) packaging that was discarded in the country, which is the world’s second-largest contributor to ocean plastic behind China.

Only 10 per cent of the 6.8 million tonnes of plastic waste generated here every year is ultimately recycled.

“It’s not the fault of the people, there’s just very little structural support, waste collection or education. Households are left to dispose of their own waste and most ends up in rivers or being burned.”

Mitchell, who is based on the Indonesian island of Bali, partnered with Gou to bring awareness to this mounting issue via the medium of design.

“The aim was to create an everyday object that can start conversations and instigate awareness and change,” Mitchell explained.

The chair itself features an under-seat storage unit for vinyl records in a nod to Gou’s growing personal collection and a hypnotic spiral pattern that is swirled into the melted plastic by hand before it has time to set and harden into sheets.

“We then use these sheets like wood and we work with local Balinese artisans who make the chair by hand in their workshop,” he explained.

The final chair can be assembled without the need for screws, staples or glue, simply by using plastic offcuts created in the process of trimming the sheets as welding rods.

Melted with a heat gun, they fuse the different components together in a method that Mitchell claims produces zero waste and allows the whole chair to be recycled again at the end of its life.

“It’s a technique that Max Lamb showed us in a previous project,” he explained.

“The chair is made of just one material, which is really key for recyclability. When too many materials are mixed, it usually makes products very hard to recycle.”

Although it is vital to recycle the plastic that has already been created, Mitchell argues that a ban on single-use plastics is the only real solution to the global waste crisis.

“Western countries send much of their trash here or to other locations around Asia, they just brush it under the carpet,” he said.

“I think banning single-use plastic is the only way at this stage. But implementing that will be very difficult and there’s no immediate replacement within the current system,” Mitchell added.

“Awareness is growing but corporations and governments should be the ones taking responsibility.”

Mitchell dove deeper into his mission to clean up Bali during a live talk as part of Dezeen’s Virtual Design Festival last year.

Among other things, he explained that his hospitality brand Potato Head regularly stages beach cleanups and turns the plastic waste found in the process into furniture and other amenities that are then put to use in its hotels and beach clubs.

A slew of other designers have created seating designs from recycled plastic in a bid to make a dent in the 300 million tonnes of plastic waste produced globally every year – or at least raise awareness around the issue.